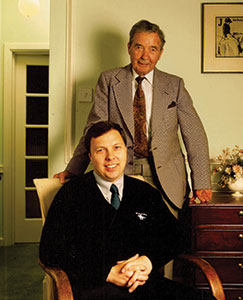 A legend both on the turf and on the page Dick Francis eventually asked his son to help carry on the family business of writing novels. Katherine Locke talked to Felix Francis who has successfully taken the reins.

It is unusual to finish writing a book your father started, but made even more so when you are not actually a writer by trade. Felix Francis, son of Dick Francis, has taken on an uncommon legacy and one that he certainly wasn’t prepared for. ‘My father was a prolific writer’, he says, ‘producing almost a book a year for 40 years’. Felix had no intention of following in his fathers’ writing footsteps; in fact it was his dream to be pilot.

Inspired, perhaps, by his father’s time as a pilot in WW11, Felix had always been fascinated by aeroplanes. A childhood illness meant he wasn’t able to join the RAF, but British Airways did accept him. Due to start his new job immediately after graduation, everything was going to plan for Felix, until a devastating letter arrived from BA explaining that he was ‘not a good bet for the pension scheme’, and therefore the job offer was withdrawn.

‘My friends were all going off to start various careers and I was left with nothing—a physics degree and nowhere to use it’. The letter that changed the course of Felix’s life arrived on Friday, but by Monday, through sheer determination and a dash of luck, he had a job at Hampton Grammar School as a physics teacher. ‘It wasn’t what I had planned at all, but it turned out that I really loved it’.

Felix went on to have a very successful teaching career, becoming Head of Science at Bloxham School, near Oxford. At this stage, his parents were living in Florida and in 1987 Dick Francis was having problems sorting out his papers for the accountant. ‘My mother asked if I could come over to help, and I thought, “It can’t be that difficult”. Four years later, I was flying out every half term and holiday to help and was totally exhausted. Finally, my father said, “Give up your day job and I’ll double your salary”, so that’s what I did”.

Felix spent the next few years working for his father, doing everything from changing a light bulb to advising on investments, but it was at a lunch in The Gay Hussar in Greek Street with his father’s literary agent, that the seed of a new idea was sown. ‘The agent told me that we had a problem. My father’s books were falling out of fashion, and as such some of them were going out of print’. With over a thousand new books being published every week in the UK, there was just no room for the old ones and it was a thought that shocked Felix. The agent asked if he could commission a writer to finish the latest book. The idea was to inject new passion into the work and stimulate the backlist.

‘I thought about it for a minute or two and then heard the words “I’d like to have a go”, coming out of my mouth’. Felix was given two months to come up with a few chapters. Much to his relief, they were approved and the collaboration began in earnest. Although Felix is quick to point out that the Dick Francis publishing empire had always been a collaborative affair. ‘My mother used to say it was a cottage industry, without the cottage’, says Felix. Dick Francis had a very strict writing schedule, whereby he would sit down to write a novel in January, the publisher would pick up the pages in June and it was published in September. Mary Francis (Felix’s mother) was central in helping with research and supporting the writing. ‘The novel writing had always been very much part of our family life and plot lines would be discussed around the table’ he says.

This early training obviously paid off, as the four novels father and son wrote together became best sellers and the Dick Francis back catalogue was saved. Felix has gone on to write a further four himself, all of which have gathered a huge fan following. The latest novel Damage is the 50th in the series. ‘The books have all been put out by the same publisher’, says Felix, ‘and there is a definite pride in continuing the family business’.

The family business, of course, was a spin off from Dick Francis’ hugely successful racing career. ‘My father was a champion jockey, winning over 350 races during his career and he was jockey to the Queen Mother the year I was born’, he says.  By 1957, Dick had sustained so many injuries that the Queen Mother advised him to retire. However, his love of racing never waned, and he continued to be involved in the sport up until his death in 2000.

‘My childhood was spent travelling around the country to various race courses’, says Felix. ‘Our lives were seeped in racing and I knew my way around the country solely by which racecourse we were at. My father was a well-known figure on the circuit and we were used to people whispering, “that’s Dick Francis”, when we went by, which made a huge impression on me’.

Felix also recalls how fortunate they were to have a father who was home so much of the time. ‘It wasn’t that usual in the 1950’s and 60’s to have a father at home, so we were very lucky. When we were riding our ponies in the field, he would lean out of the study window and shout instructions at us. We would completely ignore him, as we were entirely focussed on being Lester Piggot!’

Felix Francis still visits racecourses as part of his work. ‘I was at Uttoxeter recently, filming a trailer and as I walked past a group of people, I heard a whisper go up “that’s Felix Francis”. I almost turned around and hugged them’.