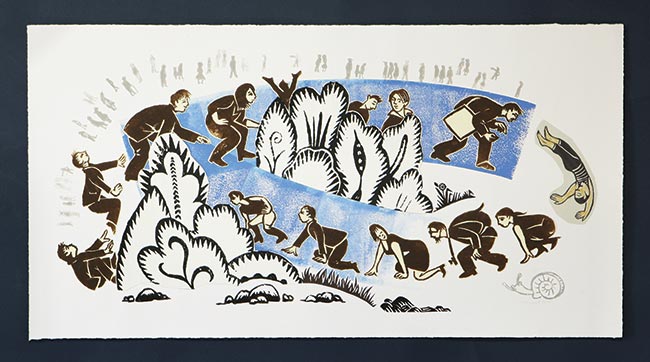 Anyone who can remember being a child waiting for Christmas morning will relate to Hugh Dunford Wood’s story. ‘Apparently, Cezanne was so excited about getting up to go to work the next day,’ he says ‘that he would wake his wife up in the night and play chess with her until dawn. I often feel like that when I have a new idea, or something I am really involved in—impatient for the new day’.

Hugh’s enthusiasm for art is infectious and he is passionate that art should be open to all. ‘If I can do it, anyone can’, he says. Growing up in a very conventional, non-creative household—his father was in the military and his mother from a family of medics—he says that he would have been ‘gobsmacked’ had he known the life he was going to lead. ‘We didn’t know anybody who worked for themselves. We had a very ordinary life’. When Hugh was fourteen he read a book about Modigliani and thought ‘that sounds better than the army’, and the seed of a creative career was sown.

At eighteen, he attended the Ruskin School of Drawing and it was there ‘I met my tribe’, he says. He started to mix with other artists and became inspired by stories of people escaping the mundane to go on to create extraordinary things. ‘David Lean is the perfect example’, he relates, ‘He lived with his mother and worked with his father in a solicitors office. He would dread going home to dreary suburban life, and in those days they showed shorts at Waterloo Station, so he would watch films until the last train home. His brother, Edward, was a very successful academic and one day a friend of his mother’s stopped by for tea. His mother was busy boasting about Edward’s many successes—the books, the articles etc. And what about David? the friend enquired. Well, there isn’t much to say about David. Looking around, the friend noticed all the trashy Hollywood magazines and said, “He should go into the movies”. The rest, as they say, is history.

Hugh is full of stories that inspire—stories that tell of those who have taken the extra steps to become exceptional. He is a man who thinks big and refuses to be weighed down by the dreary. His work is as exuberant as he is and he has taken many paths during his career—never afraid of a new challenge, or to adopt a flexible approach. For example, during the 1980’s he started a very successful hand painted tie business after making a silk scarf for his first wife. ‘Everyone loved the scarf and began asking where they could buy one. It started with that one piece and ended up with twenty-four painters working for us. We sold ties all over the world. Paul Smith was a regular client’.

After selling the business in the 1990’s, his next venture took him down a different route altogether. After being asked to create a design for the National Trust, his thoughts turned to handmade wallpaper. Realising that decorative papers were coming back into fashion, he decided to dip his toe in the water with a few of his own designs. ‘We took a stand at Decorex—the design exhibition in London—to see how the patterns would be received and were amazed by the reaction. We had designers clustering around the stand and had enough interest to start a whole new venture’. Hugh’s wallpapers designs continue to sell well and the hand printed technique, using small blocks, makes the walls of any room stand out.

His very latest project came about after he made his daughter a cat cushion—printing the design onto Scottish linen. The cushions are made in Bridport, hand printed and hand sewn, and will feature in next month’s World of Interiors magazine. He has expanded the range to include hares, owls and squirrels.
All this whilst still carrying on his own creative work. Hugh loves portraiture and thinks that the work should be a collaboration between the artist and the sitter. ‘So many portrait painters work in silence and make the whole thing a very sombre affair’, he says, ‘I like to work in front of a mirror, so the sitter can see the work as it develops and therefore be a part of it’.

He is also about to exhibit a new collection of work at Chelsea Arts Club. ‘I am very excited about the new work’, he says. ‘I call then Collinos, as they are a fusion of collages and linocuts. I believe they include all the elements of art I am interested in—the decorative, the observed and the imagined. They also have a sense of humour, or a lightness, that I am enjoying’.

Hugh is surrounded by creativity and immersed in the possibilities of a creative life. His house in Lyme Regis is a riot of interesting objects, works in progress (not just his own, but also other family members, or young artists he is encouraging) and has its own impressive creative history. ‘Sir Laurence Whistler lived here’, he says. ‘He was a poet and an exceptional glass engraver, who was frequently commissioned by the Royal Family’. Laurence Whistler (brother of Rex) engraved several of the round windows in the house, which makes the property extra special—that and the jaw dropping views of Lyme Bay.

In his own inimitable style, Hugh has founded the National Gallery of Lyme Regis, described as ‘a lively and curious collection of contemporary work from artists around the country’. As part of Hugh’s commitment to encouraging enjoyment of the arts, he also shows occasional short films about artists and relishes discussion about the work.

Hugh acknowledges that he is extremely fortunate. ‘I have been doing what I want all my life’, he says, ‘I don’t have a private income and have worked hard to build my creative work, but I wouldn’t have it any other way. My life continues to be exciting and work is never a burden to me’. How wonderful!

All of Hugh’s work can be found at www.dunfordwood.co.uk