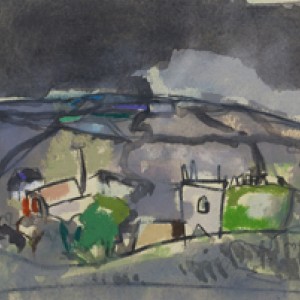 Julian Bailey is one of this country’s foremost figurative painters. His new paintings represent the culmination of thirty years work, searching for and exploring a painter’s language that is both true to himself and appropriate for our time. Instantly recognisable for his eloquent, seemingly effortless brushstrokes, Julian’s work has grown up with him through a process of hard work and a kind of relentless daring.
Invited to preview the exhibition at his studio, I find myself in a delightful gravel courtyard surrounded by geraniums in terracotta pots with doves, chickens and ducks roaming free. Julian appears dressed in an old guernsey and fisherman’s cap and leads the way into a sunlit room where thirty or forty canvases thickly painted in compelling colours are lined out on shelves.
Concentrating and looking carefully at each one, it becomes clear that something has changed in his work. Soft greys and shades of tan surround the brighter colours, causing them to glow even more vividly. From windswept coastal landscapes to figurative groups, the themes that have occupied him for many years have now attained a maturity and strength. The skies are stormy but always there is a ray of light. “They’re paintings about release from constraint,” Julian says over coffee. “For me it has always been about more than happiness or fun. It’s the contrast that counts, a moment of joy that lifts out of the mundane. I’ve painted boys diving and yachts in full sail, people literally taking the plunge and feeling the wind on their faces. More recently my figures are setting out on a journey either on foot or by canoe or by some other means.”
I ask about the journey that has brought him to where he is now. His father, Dudley Bailey, is a painter and Julian grew up drawing wherever he went, just as he still does. His father was “hugely encouraging. We always talked about painting and, yes, my first paintings were really quite like his.” Julian held his first exhibition aged 17 in the Malvern Library. “It spoilt me for ever really. They sold masses of paintings and I tend to think it should always be like that.”
At the Ruskin School of Art in Oxford, “I’d always been top in art class at school, and I walked straight into the trap. They tore my work to shreds. It was quite a blow. I had to completely rethink.” Having graduated from Ruskin he went on to the Royal Academy Schools. A year of life drawing helped him to rebuild. “I started to draw from life and then paint from the drawings. So the drawings have to contain the information that I will need. I don’t use photography.”
After he left the Royal Academy he continued to enjoy the student life in London, painting the Portobello Market, staying out late with friends drawing people in jazz clubs and cafes. He was taken on by the New Grafton Gallery in Barnes where he showed foreboding paintings with stark lighting and black outlines reminiscent of Josef Herman and David Bomberg.
By this time Julian had met and married the potter Sophie Cullen. In 1994, they took a flat for six months in Bath. The studio had a lovely view over the river and there Julian had a break-through moment. The black outlines disappeared. His palette lightened up and he realised he could draw colour against colour in paint on a board. He had found his painting style.
Shortly afterwards Julian was taken on by Browse & Darby. As a teenager Julian’s father used to take him there to look at the work of Gwen John, Sickert and Degas. When William Darby agreed to take five of Julian’s pictures, “I was incredibly excited.” Julian has since had five solo shows there.
In 1998 Julian and Sophie bought their house and moved to Dorset. With a young family, Julian turned to Gifford’s Circus, theatre and short trips to the Mediterranean to find subject matter efficiently. Then he could come back and paint at home. “I’m interested in the relationships between the figures, the male and female, the performer and the person watching, using gesture to convey language. The paintings are about the joy of youth, about being part of a group, but of course they are also about being the one left out. The artist is on the outside looking in.’
As his four children grew, Julian introduced the coastal landscape to his work. They were spending time on the beach at Ringstead and Lulworth, messing about with a boat. “It’s why we came down here—the creamy white cliffs against the sea and sky, the hills like upturned pots, the dry clay and chalk—they’re spell binding.”
He paints every working day to a disciplined schedule and finds it really tiring. “It’s demanding, always looking to find freshness and clarity, like an electrical charge.” He does layer after layer of painting and scraping off, each time upping the ante to come closer to what he wants. “It all has to come together at the same time or it all has to unravel. I’m trying to paint form, in space, in good colour all at once.” As it is his brushstrokes are deliciously economical conveying the weight of rock, the lilt of a boat, the poise of a figure. “I’m not stroking the surface,” he says with a smile.
How does he decide what to include? “I take the point where I am sitting and I draw the line to where I want to be. Draw that first on a clean sheet of paper. Choose your journey. Follow the white tracks scored into the green landscape. Make it a searching line. It might follow a hedge winding up a hill or go over a rooftop, as long as it leads your eye. Everything else in the picture then has to compliment that line.” I can’t help feeling that Julian’s own journey will always follow a searching line.