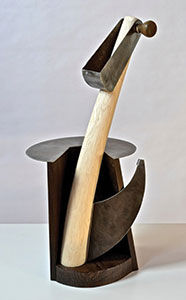 Guy Martin, one of the sculpture winners of the Marshwood Vale Magazine Arts Awards 2013, was brought up in a household where famous sculptors were regular visitors. He met Katherine Locke to talk about how he came to be blessed with the gift of making and after a successful furniture making career turned back to sculpture.

There are three interesting facts about Guy Martin. Firstly, he comes from a family of sculptors, secondly he has spent many years avoiding becoming a sculptor himself and thirdly he worked as Anthony Caro’s assistant in the 1960’s and 70’s.

With such impeccable sculpting credentials, you would expect the man to exude confidence in the medium. ‘I never thought I was quite good enough’, he says. Perhaps living and working among established artists can hinder creativity rather than inspire it.

‘My father was a head of Sculpture at St Martins’, he says. ‘His work was figurative and he was a big man, both in terms of his ambition and his charisma. He was a hard act to follow’. Guy grew up in a household where famous sculptors were regular visitors. ‘I met Henry Moore as a child’, he says. Although Guy himself proved to be not particularly academic at school,  he was ‘blessed with the gift of making’.

His father recognised this and Guy worked for Anthony Caro both before and after his own studies at St Martin’s. Working for Caro gave him a firm foundation in practical skills, including welding, which came in very handy later. ‘In 1975, when my wife was pregnant with our first child, I worked as a welder on the railways for about a year to support us’, he says.

The last piece he worked on with Caro was a 1984 Arts Council touring exhibition called Four Rooms. Caro’s piece was entitled Child’s Tower Room and was the first of Caro’s ‘sculpitechture’ pieces, where the viewer was invited to go inside the work and experience the inner space—a cross between sculpture and architecture. ‘Towards the end of making the piece’, Guy says, ‘Anthony, very casually said to me “Why don’t you make furniture”’.

This throwaway remark ignited a hugely successful furniture making career. Guy worked with John Makepeace at Parnham College for six years. ‘John approached me because he wanted someone with a fine art background combined with practical making skills’, Guy says. ‘It was an exciting time as we created courses where professional practitioners worked alongside the students. We worked together on real projects and commissions’. Parnham College became one of the leading woodworking and design colleges in the country and many former students went on to have extremely successful careers. ‘The work was demanding’, says Guy, ‘but ultimately very creative’.

Toward the end of his time at Parnham, Guy became fascinated by willow as a material. ‘I invited Milo Naeve to come and give a seminar’, he says. Milo Naeve was an expert in American Arts and Crafts, and American furniture making in particular. ‘I wasn’t keen at first’, admits Guy, ‘but he introduced me to Clifton Montieth’s work and I became excited about the possibilities of willow’. It is more an American tradition in terms of furniture making, despite willow being readily available in the UK. ‘It was like an epiphany’ says Guy, ‘particularly as we are so close to the Somerset levels, where willow grows like a weed between May and October’.

Eventually Guy left Parnham College, in order to concentrate on his own work. He was committed to sourcing materials himself and being environmentally aware. He used only natural materials and avoided adhesives and chemicals, relying instead on good design to construct a solid piece. He harvested his own ash thinnings, a material that would often be wasted or burnt, and remained committed to sustainable furniture production. He exhibited his work at The Chelsea Arts Fair and Art in Action and created a range for retail.  He was shortlisted for the Jerwood Prize in 1999.

He also enjoyed a national tour, funded by the Arts Council, which took almost two years to complete. ‘The tour was very enjoyable, but stretched me. I was extremely privileged to enjoy two years paid work, but although I loved the invention of furniture making, I was beginning to hate the repeats’.

So, another change was afoot. ‘I was growing restless’, he admits, ‘there were limitations of the medium. Willow was great for chairs, but less good for cabinets and tables. Furniture design is full of constraints (including the prosaic time and budget), which is a creative challenge, but one I was beginning to find frustratingly limiting’.

It has been an interesting journey, but one that has ultimately ‘led me back to sculpture’. Guy says that he is both reinventing himself and returning to his roots simultaneously. ‘I love the idea of playing and inventing with the work’, he says. ‘I approach sculpture with a very open mind. Making art differs from making furniture inasmuch as I often don’t know what the piece is until it arrives. It is about working willingly with the dialogue as it appears.’

Guy is honest about the risks involved in a change of direction. ‘I shut myself away in the studio for a time’, he says, ‘and the early work was truly awful. But it is a process that one has to go through’. He began working in clay, but has now retuned to his more familiar materials of wood and steel. His work, he says, focuses on ‘what it is to be human’, exploring a range of feelings and emotions from ‘dark to optimistic’. ‘There is also an aspect of making sense of a personal history’, he says. ‘I am playing with the subconscious’.

His latest project takes him full circle back to Caro’s Child’s Tower Room. ‘I am working with the Cape Farewell Project’, he says ‘it is an organisation which curates cultural responses to climate change’. Cape Farewell has run projects all over the world, including Iceland, Canada and Russia. The latest work will take place here in Dorset. The piece will be sited on the Wessex Way, between Sydling St Nicholas and Godmanstone.  It is a land based piece and Guy has returned again to the tower structure.
‘I was drawn to the idea of a bell tower’, he says, ‘which contains two ideas. The symbol of the tower as a reference point in the landscape and the way that bells have historically meant both warning and calling (to prayer for example)’. Viewers will be able to enter the tower and ring the bell themselves. It is an exciting, large-scale work and it is Guy’s hope that it will become part on the landscape in which it will sit.

‘I hope that the work will be finished in May/June 2014’, he says. Watch this space for more news about the piece and the project, as it is sure to attract a lot of national, as well as local attention.