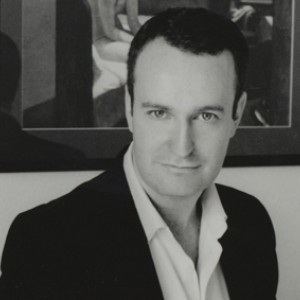 Maf, a Maltese terrier, given as a present to Marilyn Monroe by Frank Sinatra became her constant companion for the last two years of her life. Katherine Locke talked to Andrew O’Hagen whose new novel looks at a fascinating moment in American culture through the dog’s eyes.

Andrew O’Hagan’s six year old daughter has finally called a halt to the game they have been playing all her life. Her novelist father has become too much of an embarrassment for her. The game is ‘Dogs’, and consists of choosing your breed and becoming the character. Invaluable research for Andrew’s latest novel The Life and Opinions of Maf the Dog, and of his Friend Marilyn Monroe, told entirely from the perspective of the dog.

It is an unusual subject, with an unusual central character and it raises two very obvious questions. Why Marilyn Monroe and why the dog? ‘I grew up in a house with no books’ says Andrew, ‘this was a Glasgow housing estate in the 1970s where books were considered to be for other people’. One day Andrew’s father brought home a biography of Marilyn Monroe and he was immediately captivated. ‘I had never seen a woman like it’, he recalls. There began a life long interest in the Hollywood legend. He was particularly fascinated by her journey out of poverty and into the most famous woman in the world. ‘She used art, cinema and literature to aid her passage from small town girl to movie star and I could relate to that’, he says.

Being such a fan, he was delighted when he came across an auction of her personal possessions in New York in 1999. Among the lots were six Polaroids of Marilyn with her dog Maf. The photographs ended up fetching $22,000. When Andrew was looking at the images, he says he ‘heard the voice of the dog’. ‘As a novelist you follow those voices whenever you hear them’ he says. He then spent the next ten years researching the project.

His passion for all things Marilyn got him into some scrapes, even risking arrest in Bel Air. ‘I wanted to walk around her neighbourhood and feel the pavement under my feet’ he says ‘and LA doesn’t cater for walkers, dogs or wandering writers’. As anyone who has been there will attest, if you aren’t in a car you immediately arouse suspicion. However, those walks and raiding the archives of 20th Century Fox proved invaluable when writing the book. The period flavour is absolutely spot on and it is clear that a phenomenal amount of research has gone into the work.

As well as spending time in LA, Andrew also interviewed many people from the psychoanalytic world in New York. Marilyn Monroe’s analyst, who she saw for many years, was a particularly interesting character who had grown up in Vienna and played with Freud’s daughter. She also became Freud’s patient as a young woman, so her credentials were impeccable. Whether her methods with Marilyn were successful or not remains open to debate. It is this attention to detail in the novel that makes it such a fascinating read and it is easy to see how ten years of research went into the finished product. ‘As Samuel Johnson says’ quotes Andrew ‘“It takes miles of literature to make one little book”’.

So what of the dog? Maf was a Maltese terrier, given to Marilyn as a gift from Frank Sinatra and was her constant companion for the final two years of her life. The puppy was bred in Scotland by the family of Vanessa Bell and imported to the US by Natalie Wood’s mother – an eccentric collector of dogs and supplier of canines to the stars. There is no doubt that Maf bore witness to a fascinating moment in American culture and politics. In fact, after Marilyn’s death, the dog took up residence in the White House, a period of history that would certainly warrant a sequel. But Andrew says ‘This is a book you could only write once’. He was drawn by the prospect of the opportunities for comedy that the structure allowed. ‘Maf absorbs the knowledge and reading of everyone he comes into contact with’, as such he is astonishingly well read and has the insight of a philosophy graduate coupled with the chutzpah of a Scottish boy made good. Can Andrew relate to Maf’s journey too?

‘The novel has been described as picaresque by a number of publisher’s and journalists’ he says ‘ and it definitely is an adventure story told from the viewpoint of the lowliest character. There are some aspects of Maf’s story that I can absolutely relate to’. As previously mentioned, Andrew grew up in a working class home with his parents and three brothers. He was the first person in the family to go to university. His lucky break came when his English teacher pulled him out of class one day. She told him that even though he played the class clown, he had probably read more books than she had. Andrew remembers her as being very old and wise, but looking back he says ‘she was probably only about twenty-eight’. Miss O’Neil took the young Andrew O’Hagan under her wing and offered him extra English tuition and encouraged him to apply to university.

His second lucky break came when, as a twenty-one year old graduate fresh out of the University of Strathclyde, he landed a job as an editor on the London Review of Books, a post usually reserved for Oxbridge graduates. ‘This was the moment I began to realise the possibilities of writing and its different disciplines and styles’ he says. His first book, The Missing was published in 1995 to great critical acclaim. A non-fiction piece, it explored the lives of people who have gone missing and the families they left behind. His debut novel Our Fathers was nominated for several literary awards, including the Booker. Every book Andrew has published since has been nominated, or received, a major literary award.

It is clear that Andrew loves writing in all its forms. He is a prolific journalist and essayist, contributing to The Guardian, The New Yorker, The Times and The Evening Standard, amongst others. Also, reading the scenes with Marilyn at the Lee Strasberg Acting Studio, it’s clear that he holds actors in great regard too. ‘I’ve had a fantastic time recently working with actors reading scenes from Maf the Dog’ he says. He admits to having something of a showbiz mentality himself and finds working with actors a complete joy. ‘I think acting is the art most similar to writing’ he says ‘as it requires the ability to truly inhabit a character and become it. Actors also use language in order to create a reality and that is very appealing’. His third novel Be Near Me was adapted for the stage in 2009.

And what of the dogs in his own life? ‘My dad breeds Irish Wheaten Terriers’, he says ‘and we have one of his, a seven year old boy called Otis’. However, Otis is taking a break from city life, as he was finding the Primrose Hill traffic too stressful. ‘He has gone to stay with friends in Norfolk for while. It‘s a kind of Betty Ford Clinic for dogs’.

Andrew O’Hagan has received a huge amount of attention for Maf the Dog. The film rights have already been sold and several major actors have been tipped for the lead roles (George Clooney as Frank?), he is not however, going to write the screenplay. ‘It needs fresh eyes’ he says. When asked if he agrees with the critics who are saying that this is his best novel yet, he replies, ‘Your best book is always the next one’.