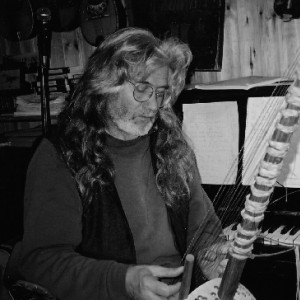 Andrew Dickson’s music is not immediately synonymous with pantomime. However, he has just finished work as the musical director on Aladdin. Unusual, you may think for an award-winning composer who is famous for his collaboration with innovative filmmaker Mike Leigh. Not so unusual when you learn that this version of Aladdin was written by Adrian Mitchell and performed just off the Falls Road in Belfast. It was a community production, which aimed to involve as many local people as possible, either as cast or audience. ‘It is one of the poorest areas of Belfast and many people haven’t been to the theatre before’ says Andrew ‘so all tickets were £5.00 each’.

This type of inclusive theatre has always been close to Andrew’s heart. He describes himself as someone who has spent his life trying to help people to discover music and is a committed teacher as well as a composer. ‘The play was originally commissioned for the Children’s Theatre of Minneapolis’, says Andrew ‘but the Americans don’t really get pantomime, I think it could be something to do with the cross-dressing!’ As we talk, it becomes obvious that the anarchy of the medium suits him very well and combined with the opportunity of supporting people to fulfil their musical potential, it proved an irresistible project (‘even though there’s no money in it’ he jokes).

Andrew is better known perhaps for his film music. High Hopes, the first feature film he worked on with Mike Leigh, won him the BFI Asquith Award and European Composer of the Year. The pair met when Andrew was writing the score for a production of Othello at the Nottingham Playhouse. ‘I think Mike responded to the simplicity of my music and the fact that I don’t use electronic or computer-generated sounds’ he says. The sparseness of Andrew’s music also complements Leigh’s film making technique. ‘He is brilliant at using silence’ says Andrew ‘most films have almost continual background music, like aural wallpaper; but Mike isn’t afraid of letting the film speak for itself’.

Vera Drake, which is set in the 50s and is about a woman whose secret life ultimately tears her family apart, has already received great critical acclaim. Surprisingly, there are only fourteen minutes of music in the film and Andrew tells me that it is some of the most discordant and difficult he has ever written. The score is largely made up of women’s voices, which reflect the very emotional and tormented nature of the film. ‘I first got the idea of using women’s voices when we were rehearsing with the choir at The Palace Cinema in Bridport’ Andrew tells me ‘The acoustics in the building are absolutely wonderful. There were twelve people singing together and for the first time everyone could hear every note’,

When asked about the mechanics of writing music for film, he explains the laborious and time-consuming process. ‘It takes five or six weeks of very intense work’ he says ‘I endlessly watch the rough cuts of the film as the music is written before the final edit. Mike and I will spend a couple of weeks ‘spotting’, which is identifying the points of the film that need music’. Between them they decide on which instruments to use ‘it is almost a case of an instrument for every character’ he says. After that Andrew will write the music alone. ‘For every twenty tunes I write, Mike will choose one’ he says ‘then I write twenty variations of that tune and perhaps he will choose two, and so it goes on. Initially, there were nearly five hours of music for Vera Drake’, he says ‘but Mike is brilliant at continually whittling it away to get to the heart of it’.

Andrew is an entirely self-taught musician. He admits that he often breaks the rules because he isn’t aware of them in the first place. This gives his work an edginess that suits Mike Leigh’s creative directing style, which relies on improvisation and many weeks of preparatory work before filming begins. His lack of a formal musical education means a freedom from conventional academic music theory. As he says – ‘for me music is all about the hands and the heart, not the eyes and the brain’.

Vera Drake will undoubtedly win Andrew further acclaim as a film composer. It has been nominated for several BAFTA’s, including Best Actress and Best Director. Ironically, he is a world-famous film composer who lives in a town with no cinema. As we chat about the film and the vital role The Palace played in initiating the process of writing the music, Andrew echoes the views of many local people when he says ‘wouldn’t it be fantastic if we could see the finished film there?’