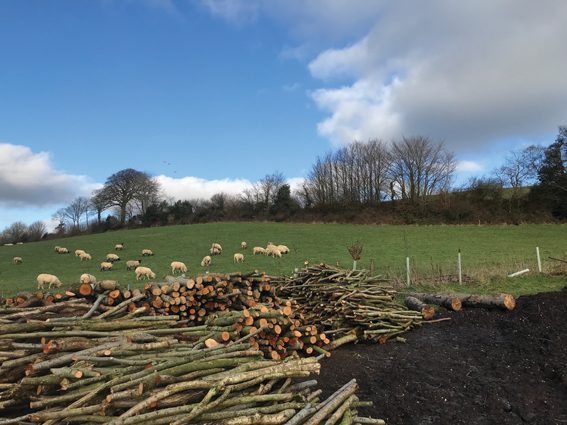 A burgeoning opportunity for rural jobs and renewable energy

The management of hedges is an important, complex and often thorny subject, that can divide opinions as passionately as Brexit.  From medieval times, hedges have been managed by laying and coppicing, providing communities with a source of wood for fuel and tool-making.  In the 1950s, higher labour costs and cheap heating oil encouraged most farmers to move to mechanical flailing of hedges. The current need to reduce fossil fuel use and an increasing demand for wood as a renewable fuel has rejuvenated interest in hedge coppicing.  Ross Dickinson, a local farmer based near Pilsdon, is developing an approach that could provide both profits for farmers and benefits for wildlife, soils and carbon sequestration.  Dr. Robert Wolton, Chairman of the Devon Hedge Group, went so far as to say, “…it is truly ground breaking:  it has the potential radically to change the way many farmers view their hedges and how they manage them” [1].  Owen Day and Paddy Parsons went to meet Ross and find out more.

Ross has been a farmer all his adult life, gradually building up the 400 acres at Thane Farm and Racedown Farm near Pilsdon where he lives with four generations of his family.  A dairy farmer until 2003, the downward pressure on milk prices forced him, like so many other small dairy farmers in the South-West, to take the painful decision of selling his herd and finding new ways to make a living from his land.  Cutting and selling forage from his organic grass fields now provides the bulk of his income, and he also sells firewood, which he harvests with his son Euan from the 12 miles of mature hedges and small copses on his land.  Ross coppices his hedges on a 15 to 20 year rotation, leaving the larger trees (standards) every 20 metres or so.  He estimates that hedge growth on his farm is below average for the South-West, and that hedges on more sheltered farms with better soils could grow twice as fast.  The hedges along roads are flailed instead of coppiced, as felling small trees near traffic is obviously hazardous.

Ross sells four wood products from his coppiced hedges.  First, the usual round and split logs (4-8 cm diameter) from the trunks of small trees are mostly sold in bags to people in the local area.  Secondly, the hazel rods and other small branches (between 2 and 4 cm in diameter) are cut up by a rugged Czechoslovakian machine into “cobs” – small chunks of wood 5cm long. (see photo 2).  These cobs are sold for small top loading wood burners, as found in shepherd’s huts and boats.  Thirdly, what he calls “ugly sticks” (see photo 3), the thinner branches of less than 2cm in diameter, he sells to glamping and camping businesses for open fires.  As the market for “ugly sticks” is very limited, most of these are burnt by Ross and his family on their own eight wood burners.  Finally, some of the brash material is sold as kindling in small nets.  He uses his big dairy barns to store the logs, cobs, sticks and kindling, where they are air-dried down to 20% moisture.  The bulk of the brash, including all the blackthorn, hawthorn, holy and brambles is burnt on site, though potentially could be chipped and sold as fuel for biomass boilers.

In 2018, Ross decided to examine the profitability of his hedge coppicing business in more detail in the hope that it might also help other farmers generate a supplementary income and avoid the significant costs of hedge flailing.  He conducted an experiment on a 220 m hedge that was ready for coppicing (see photo 3) and that had a typical mix of about 25% thorns, 25% Sycamore, 5% Ash, 10% Hazel, 10% Holly, 10% Willow, 5% Field Maple, 5% Oak and 5% Bramble. All the costs and revenues involved in coppicing this 220m hedge were carefully measured and showed a profit of £1,530 (Table 1).  The results of this experiment were written up and presented by Ross at the 2018 Organic Congress in the agroforestry section [1, 2]. His excellent presentation can be seen at https://youtu.be/gIAroLWyOic.

As Ross told us, the results he obtained may not always be replicable on other farms, as conditions and availability of labour may differ.  The profit he measured was achieved without subsidy from any environmental schemes. The current support for hedge coppicing is £4 per meter; if this support was included then it would add a further £880 to the profit, giving a total profit of £2,410 or £10.95 per meter over the 15 year coppicing cycle. If a farm switched from flailing to coppicing it would increase its “natural capital” which, given the probable nature of the subsidy changes post Brexit, might help the farm attract more support.

Dr Robert Wolton is a leading authority on hedges and has produced a detailed review of the enormous “natural capital” they provide to our society and our environment.  They provide valuable habitat for our wildlife with an incredible “2,070 species identified from a single hedge, all big enough to see with naked eye. The true total is likely to be close to 3,000” [3, 4].  Hedges also provide services for soil conservation, pest and disease control, crop pollination, shelter for livestock, carbon capture and storage, flood risk reduction, landscape beauty, and cultural and historical heritage.   Unfortunately, natural capital does not always translate into cash for farmers, and as Dr Wolton points out “to be healthy and ultimately to survive, hedges have to provide some value to farmers. They must be seen as an asset, not a drain on resources.  If they can pay their way, or better still provide an income for the farmer or contractor, so much the better.  In this context, the experiment that Ross reports on here is truly groundbreaking:  it has the potential radically to change the way many farmers view their hedges and how they manage them” [2]  Coppicing may appear brutal for the hedge, but the root systems remain intact and regrowth is rapid.  The change in the environment allows a wide variety species such as foxgloves to flourish and the 15 year rotation provides the variety of habitats that nature thrives on.

Far from wanting to tell his fellow farmers what they should be doing, Ross simply wants to help the farming community explore new opportunities for supplementary income.  He sees the potential for providing significant rural employment, especially as the jobs would be flexible and have low start-up costs.  With the threat of climate change and the urgent need for all of us to do our bit by using renewable sources of energy instead of oil, Ross sees that coppicing could make a significant contribution.   “With global warming it’s all hands to the pumps” he told us as we left his inspirational farm. Ross Dickinson next to bags of cobs for sale Table 1. Cost and income from coppicing a 220 meter hedge

[1] “A Coppiced Hedge: Converting a flailed hedge into an economic crop of firewood” by Ross Dickinson, Racedown Farm, Dorset

[2] Presentation by Ross Dickinson at the Organic Congress 2018 https://youtu.be/gIAroLWyOic)