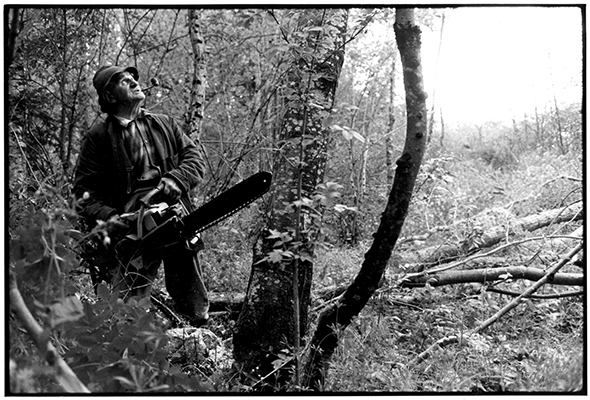 Just imagine a world without wood and woods. Where would we be? Imagine a world without the texture of wood, the sight of grain, end on and elliptical. No bark, no spalt, no planks, no quarter sawn, no furniture, no tables, no chairs, no beams, no roof trusses, no windows, no floor boards, no wooden boats, no houses even. No woodpeckers hammering away, no wooden coffins. We would be stuffed to put it mildly.

The value of woods and woodland as a cultural and economic resource is immense. Yet all too often we take them for granted. We sail by in our motor vehicles, we take the dog for a walk in the woods. We picnic there, we hunt for butterflies, deer and fungi. We comment on the autumn colours. Yet rarely give a thought to the timber. Forests, native, ancient hunted, pollarded or deliberately planted, all have an atmosphere of their own. Many forests aren’t even forests at all: take Dartmoor and Exmoor, hardly a tree in sight except for the odd ancient grove of sheep grazed oak. Yet they are all under Forest Law.

Working in the woods month after month is hard work but also a great privilege. For 20 years, on and off, I worked in woods, starting on the edge of Cranborne Chase that straddles Dorset and Wiltshire. I learnt an enormous amount about the customs and ways of old woodlanders, the hurdle makers who learnt their craft before the war, before the tractor age when horses were king. Men like Cecil Coombs of Ashmore who often worked in a coppice called ‘heaven’, which in bluebell time was an apt description. But extracting timber and driving old blue Fordsons down steep slopes covered in a sea of bluebells has its own peculiar problems. You can easily slide right down the hill with a full load pushing you on behind. Bluebells can be very dangerous at certain times of year. A pretty, dangerous job…

So it was a great pleasure when I was asked to review a new book of essays about woodland called Arboreal in memory of that great lover and observer of woodlands, the ecologist and natural historian Oliver Rackham. These essays, nearly forty in all, with a scattering of poems thrown in for good measure, all sparkle and shimmer in their own way.

There are some wonderful writers. Jay Griffiths for instance entrances us with her analysis of  birdsong in a Welsh wood, an essay I have read several times and savoured long and hard as if listening to the birdsong itself. Other essays are by good  friends such as Sue Clifford of ‘Old’ common ground who, back in the 1980s with Angela King, started a project called ‘Trees, Wood and Green Man’. Here Sue talks about Nottingham Forest in all its incarnations. Here also is Paul Evans with whom I made some radio 4 Landline programmes. Paul meditates about woodlands and extols the virtue of an old oak tree whilst stuck on the 7.46 from Shrewsbury to Crewe. Then there is an essay by Philip Marsden, another favourite writer of mine, talking about a small remote tangled, oak wood running down to the Helford estuary. Then Robin Walter, one of the few writers who has actually worked in the woods, debates the dilemmas that all woodman face when they mark up trees for felling or thinning and this is in a steep ‘lookout’ wood near Shaftesbury called Kingsettle.

Helen Dunmore writes about Bristol docks and the Avon Gorge and mentions all the varieties of white beam that live there and the birds gorging themselves on silence. Her writing brought back many memories. Back in the 1970s I knew the Docks and the Avon Gorge very well and worked as a boatman on the Bristol Packet. I often climbed under the Clifton Suspension Bridge and once fell fifty feet. Tree roots can sometimes be a matter of life and death. I also knew some of the old tramps who lived in Leigh woods like Reg who suffered from shellshock. Now his story would have been interesting. Arboreal in the true sense of the word—living in the woods.

Then there are other essays by excellent writers as diverse as Fiona Reynolds and Germaine Greer. Thrown into the clearings between essays are poems by Kathleen Jamie, Simon Armitage, Jackie Kay, Adam Thorpe, Richard Skelton as well as photographs by James Ravilious and Kathleen Basford, charcoal sketches by David Nash and historic images of Andy Goldsworthy constructing enigmatic sculptures for Hooke Park, near Beaminster.

This is a book with something for everybody with resonances which remind me very much of Roger Deakin and Wildwood. Well edited and chosen. A forest of its own words which will no doubt grow in importance as the years progress. As it happens the word book derives from Old English boc meaning a ‘writing tablet’ which derives from bece or bok meaning beech.

Yes—Arboreal—an excellent ‘bok’ but I would have liked one or two more essays from those that have actually worked in the woods: underwoodsmen, sparmakers, hurdlemakers, bodgers, shipwrights, gamekeepers and even poachers. But then very often those that have worked longest in woods, have very little to say: they have become part of the woods and merge into the undergrowth. They have become like the Green Man. You have to look out from the wood as well as looking in…