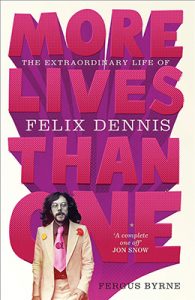 When I opened Fergus Byrne’s biography of Felix Dennis (More Lives Than One, Ebury, 2015), I knew precious little of his subject save for the Oz trial. Dennis was one of three defendants put on trial for obscenity for publishing an edition of Oz Magazine that included the infamous cartoon of Rupert the Bear with a giant phallus.

The cartoon was more folly than funny. Be that as it may, the trial was important—the last hurrah of a Lady Chatterley’s Lover era of censorship. Dennis and his two co-conspirators—Richard Neville and Jim Anderson—were convicted by the jury, but the case thrown out on appeal. However, John Mortimer, who would later create the marvelous, middle aged and crotchety legal hero, Horace Rumpole, took the case and made the ultimate point: the jurors, he said, were welcome to disagree with the “morals” of the defendants. The question was whether his clients were to be allowed to disagree with the police.
By the time of the Oz trial, Dennis inhabited a Sixties milieu that matched every stereotype. Byrne has a lovely turn of phrase when describing it all. Social Deviants’ frontman Mick Farren sported “a hairstyle most likely to be targeted in a baton charge”, while “acid heads were finding Jesus everywhere” when Joseph and the Amazing Technicolor Dreamcoat hit London.

Once Oz folded, Dennis took the skills acquired plying copies of Oz to cinema queues in the West End and made huge amounts of money publishing a series of male-oriented magazines, creating a demand and then fulfilling it as the archetypal capitalist entrepreneur. These ranged from Kung Fu Monthly and Personal Computer World in the early days to later Lad-Mag titles such as Maxim, Blender and Stuff that sold for $240 million and solidified his fortune.

The money came in handy. Dennis boasted that he had blown “$2.5 million on crack cocaine”—an extraordinary amount, given that smoking crack was the poor man’s powder (he switched when his rich man’s nose could endure no more).

Another addiction he could well afford was sex, or at least his own version of it. Andrew Marr believed that the Oz case “rather sums up Britain’s answer to revolution.” Marr’s pithy description of the Oz cartoon that brought the police knocking rather evokes the short, stocky and hirsute Dennis portrayed in Byrne’s book: a slightly demonic “Teddy Bear with a stiffy”. An inordinate amount of his life was devoted to “wenching” with anywhere from one to 14 women at a time, “not all of them prostitutes”. Dennis seemed intent on using his money to bring women around him within his sphere of control, proposing financial transactions for sex to both prostitutes and female friends alike.

Byrne records that “fueled by cocaine and his passion for sex, his obsession with women sometimes took on a sadistic twist.” Dennis would pay a number of “girls” to come to his house. “We were made to stand in the garden naked,” one of them recalled, “Just stand there. Just stand there ‘because you’re useless.’”
It wasn’t just women—Dennis was intent on controlling the world around him. He bought several cottages around his Warwickshire estate so he would not have to listen to people mowing their lawns—he could tell his manager to schedule lawnmowers only when he was away. Byrne was once driving up to the house when he ran into one of Dennis’ employees: a light aircraft was spoiling her boss’ attempts to record his poetry by daring to fly near his property, so she had been dispatched to the aerodrome to have the offending amateur pilot recalled from the sky.

It would be easy to dismiss Dennis as vaguely sociopathic. The only management book he did not throw in the bin was Leadership Secrets of Attila the Hun. With what one of his friends described as “an ego as big as the moon,” he sought to dominate business competitors, who he promised to destroy if they failed to do his bidding. Indeed, at one point, when boozing with a Times journalist while the tape recorder was running, Dennis said that he had killed a man who had abused a lady friend. She thought it was false braggadocio, but the paper printed it anyway. The police found no missing body, no mistreated woman. But why would he say it if there was nothing there?

Reading all this, I found myself repulsed by Dennis, but wanting to understand him. As Byrne writes, “few lives painted by the broad brush strokes of a press hungry for bare skin and torn morals are what they seem.” Towards the final chapter, I was surprised to see that Jon Snow and Dennis were close friends. Snow would spend Christmas at Dennis’ villa in Mustique. I greatly admire Snow and there are few whose opinion I respect more. In Snow’s view, Dennis “was not normal, he did not live a normal life,” and he was at pains to say Dennis was neither Aspergers nor Autistic. “He was a complete one-off.”

The mere fact that Snow felt the need to say Dennis did not fit one diagnosis or the other in the Diagnostic & Statistical Manual of Mental Disorders makes one think he must have been pretty close to both. Dennis wrote down the secrets of his “success” in How to Get Rich, where he confessed “that riches hadn’t made him happy, nor did he believe they had made anyone happy.” In fact, he seems to have been deeply unhappy. In Oz days, Dennis was friends with John Lennon, who strongly supported the Oz defendants, and even recorded a song for them. But the reader has to wonder whether “Can’t buy me love” was actually the Dennis-the-Eternal-Bachelor’s lament.

After Dennis was persuaded to give up crack, his obsessive nature turned to poetry, and this did seem to give him more pleasure than anything else in his life. I checked it out on line and even listened to him declaiming one. (Dennis left us with a large website of his work, in the rather optimistic anticipation that while many a great poet goes to his grave without true recognition, the internet can rectify the situation posthumously.) His work has some delightful lines, but seemed to me to be rather dum-de-dum-de-dum-de-dum.

His mother Dorothy seemed to share my view—when Dennis showed her one of his poems in a Penguin anthology, she tugged at the page to make sure it had not been glued in and then remarked: “That’s very nice, dear, but how much did you pay them to put it in?”

Again, though, what Dennis says about his poetry gives more insight into who he was than what he wrote. He insisted to Byrne that he had no empathy in his daily life as a human being, only as a poet. One of his better known poems is the paean to older women who decline to cling to the beauty of youth with plastic surgery—To a Beautiful Lady of a Certain Age. The poem suggests that he had learned that those years of using his purse to pursue a certain physical type of woman was a reflection of his own limitations rather than those of his female contemporaries.

A he grew older, and drifted away from both his crack and sexual obsessions, Felix Dennis clearly wanted to do good. He made sure that every child—more than 12,000 of them—in St Vincent and the Grenadines had a laptop computer. He used to watch the last item on the news, usually a human interest story, and used his PA and his deep pocket to intervene. He kept a newspaper clipping that told of an anonymous businessman paying for successful IVF treatment for a couple who could not conceive naturally—with a handwritten Post-it note, “the best £10,000 I have ever spent.” This much must be set in perspective: To a man who cried with angst that he was “almost a dollar billionaire” when frustrated that he could not find a bottle opener, ten grand was the equivalent of less than a one pound donation to the likes of you and me.
Then there are the million trees that Dennis planted, to try to restore balance to the planet, along with the fact that he left the profit from Dennis Publishing to underwrite the biggest reforestation project in Britain in perpetuity. As I closed the book I found myself wondering, could it be that in the end, Dennis felt more comfortable hugging trees than he ever did a prostitute?

The closest he came to having a partner was Marie-France Demolis, who began working for him as a cook, but he ultimately described as the “companion of his heart.” Byrne writes that she apparently shared his “lack of need for emotional entanglement.” Yet he died holding her hand, and she climbed into his bed to hold his dead body as the warmth left it.

Byrne got to know Dennis via a series of interviews for The Marshwood Vale Magazine, whereupon Dennis invited him to write the biography, funding his work, and giving him totally free rein and full access in his final months before being taken by cancer. When he died, Dennis left letters to his closest associates instructing them to reveal to Byrne everything, including the warts. As a result, while one might have expected a hagiography, Byrne has achieved the remarkable feat of creating a readable book that leaves at least this reader rather repelled by Dennis’ excesses, and unsure whether to like him or despise everything he stood for and most of what he did. And yet wondering why?

Fergus Byrne will be in conversation with Paul Lashmar at this year’s Bridport Literary Festival on Friday November 13 at 6.30pm at the Electric Palace, Bridport. For tickets telephone 01308 424901