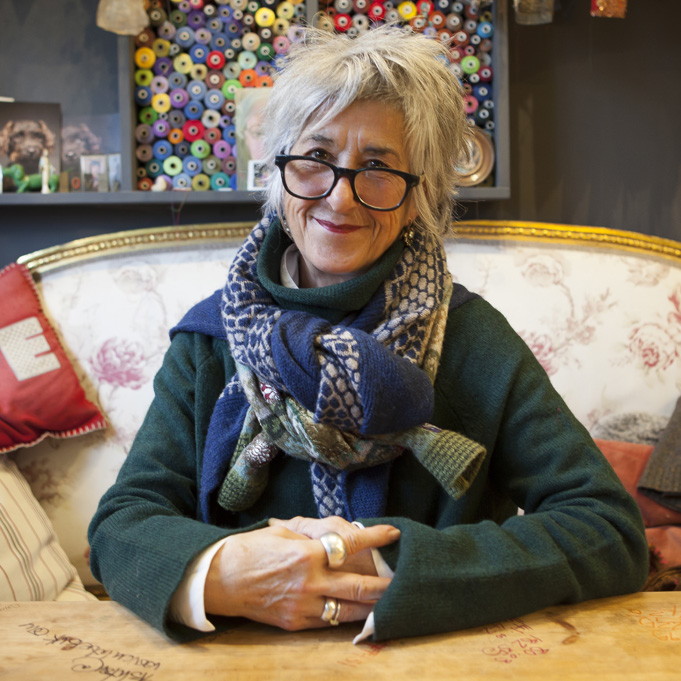 ‘Once upon a time I moved from Bolton in Manchester, with Mum and Dad and my two sisters Mand and Joo Joo, to Weymouth, when I was six. Dad had got a job as a customs officer at the then working ports of Portland and Weymouth. My first memory of that move was waiting on the beach while Dad went to get the keys of our new home on Roman Road, with its green gloss-painted bathroom.

I was sent to St Augustine’s Catholic Primary School along with my two sisters, and it’s fair to say that from the moment I stepped over the threshold of the school the nuns made it their mission to humiliate and intimidate me. Thankfully life at home in so many ways was an idyllic one. Under the care-free spirited eye of Mum we were allowed to spread our wings and find our own adventures. But there was always a fear lurking in the background for me in those early school days—monster nuns waiting to bite me. Mother finally recognised that something was terribly wrong, and being my champion, walked into the school one day, fought the beasts and slayed them dead (metaphorically speaking). A couple of years later I managed to pass my eleven plus and got a place at the Dorchester Grammar School for Girls. I never really enjoyed it but at least there weren’t any scary nuns hanging around in the corridors. I made loads of friends, was class clown, “ink monitor”, and form captain. Most of our free time was spent mucking about on the beach, playing in the park, riding bikes, sitting on walls chatting up the boys and caring about nothing in particular. An idyllic dream.

Around the third year of grammar school a careers officer came to tell us all what career they had in mind for us, given our subject choices and results. In my private delusional reality I had myself down to be a journalist, but I was advised that the only expectation they had of me was a dental nurse or a Wren. I can only liken this news as to being sharply and unexpectedly slapped across the face. Luckily for me however a peripatetic English teacher called Miss Hawkins came to my rescue. She recognised that I had a skill for English but declared I showed no aptitude for discipline or concentration. However she promised me that if I agreed to act in a play things might turn out in my favour. The play was Toad of Toad Hall and she wanted me to play TOAD! Oh honestly! I managed two detentions before I finally cracked and agreed to do it.

I don’t really remember anything about the show as I was catatonic with fear, but at the end of the prize-giving ceremony that year the headmistress announced that there was to be a special one-time award for an outstanding achievement. She held up a little silver cup in front of four hundred girls and announced to the whole school that it was for me. The little cup had my name on it. And the cheer was a loud one.

I left grammar school in the sixth form to do my A levels at the technical college. No school uniform and boys in the classes—brilliant fun. I studied for A levels in History, English and Sociology, as well as taking drama and public speaking exams. I also joined the merchant navy and got myself a job on the Sealink ferries sailing from Weymouth to the Channel Islands and Cherbourg. The hours were gruelling. 24 hours on board ship, 24 off, with little or no sleep. But the pay was brilliant. I had never had so much money. I started out pouring teas in the cafe and worked my way up to deck stewardess—not as glamorous as it sounds as most of the time I was unplugging sinks full of sick with a wire coat hanger. From there I went on to be the officers’ stewardess and became very adept at silver service in gale force seas. I wanted to go on to work on the QE2, and very nearly did, but was dissuaded by Pancho, the purser, who thought I should to go to drama school to carry on with my education. He told me to go for an audition, and if it didn’t work out I could always go back to sea. I was successful, and studied for three years at the Horniman Theatre School in Manchester. I never went back to sea.

Immediately college was over I went to London where the streets I was told were paved with gold and opportunity. And for the next fifteen years I didn’t stop working as an actress. I performed with companies that took award-winning theatre onto stages, in parks, schools, community centres and theatres nationally and internationally. I didn’t sleep much through those years. I lived on adrenaline, alcohol, and applause. There was so much to do. If I wasn’t performing, I was rehearsing a new play and learning the lines, or reading through a new script, or auditioning for a new role, or sometimes all of the above at the same time. On one occasion I was given the lead part (having spent three weeks learning the lines for another role) 48 hours before the show went live. I was told by the director to go home, come back twenty four hours later, and be off the book. I managed to learn the lines, but had no idea which scene followed which. My father died at the beginning of rehearsals for one show, and after the first night curtain came down, I drove from London to Weymouth, stayed up all night with my brother, read at the funeral, then drove back to London and was on stage for 7.30pm the following day playing to a full house. The show must go on as they say. After fifteen years I was knackered. I didn’t know who I was. I was just a mishmash of all the characters I had ever played on stage.

My sister in the meantime had had her daughter Taylor Rose and had moved from London to the seaside here in Lyme Regis. She was pregnant with her second child Saul Augustin and that’s when I had my epiphany. I wanted to go and live by the sea too, and be a day to day Aunty. I wanted to be near the children, watch them grow up and be a part of their lives. So seemingly overnight I decided to leave the life I had created for myself. I detonated it under the cover of darkness, having packed everything I could possibly fit alongside my two cats in my Mini, and as I watched my old life burn in the rear view mirror I vowed to myself I would never work for anyone else ever again. It was time to write a new script, play a new role.

Arriving in Lyme Regis I worked part time in a wonderful shop called Lovegrove, which sold work made by local artists. Realistically I wasn’t making ends meet, so I decided to give an old idea a try, to make and then sell a collection of jackets and jumpers using recycled knitwear. Having never sewn or made anything before, the idea was a preposterous one, but it just seemed to make creative sense to me. So screwing up my courage I went to a jumble sale with £20 to spend, bought a few jumpers, cardigans, and sweatshirts, and put a collection together. I took them down to Hannah Lovegrove’s shop and asked her if she would sell them for me. Within a couple of weeks she had sold the whole lot and I had a hundred pounds in my back pocket. That was twenty years ago, and I am so proud to be an independent maker and I love what I do to earn myself a living. The business journey has been a little bumpy at times, but what doesn’t kill you makes you stronger as the old adage goes. Having nearly lost everything, I had to decide whether to give up or go back to my knitwear business, and I decided it would be churlish of me not to give the knitwear another try. Thanks to Hannah Lovegrove, for the last 9 years I have had a gorgeous studio shop in Mr Pattimores old butchers shop on Coombe Street. Thank you Hannah Lovegrove, you were twice my champion. And I am still making, still designing, and still selling. I even performed as Prospera in the Andrew Rattenbury written community production The Tempest of Lyme at the Marine Theatre in 2016. Based on Shakespeare’s Tempest it was a sell-out success and won a National outstanding achievement award—a little silver cup.’