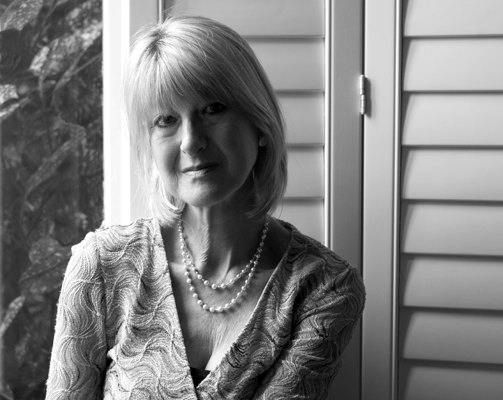 ‘I was an only child until I was seven when my sister came along. I read a lot and enjoyed my own company. I wanted to be an author for as long as I can remember and still have scraps of paper on which I’d written little stories in rounded childish writing. My parents didn’t have much money but they loved books. They would read to me every night and I am sure this made a big difference. My mother was a nurse and later an educational welfare officer. My father trained as a draughtsman with De Havilland during the war and then worked in engineering. Our parents worked very hard to give us a good education. My sister and I got places at a well-known London girls’ school called North London Collegiate where the fees were set according to parental income. Otherwise we wouldn’t have been able to go there.

We lived with my grandmother until I was 12 in the suburbs of Harrow. Then we moved to a house around the corner but I still saw her every day. She was a great influence on me. We weren’t allowed to call her granny because it made her feel too old. So, she was ‘Doris’. If I had a teenage argument with my parents, Doris was the first person I went to. I think children can benefit greatly from living with grandparents. I feel so lucky that my only surviving grandparent was so close.

Our parents expected us to have high flying careers. I was hopeless at maths and science. I never considered myself to be bright as the only thing I could do was write stories! I remember going to a careers convention and saying that I wanted to be an author but was advised to do something ‘safer’ like teaching. I walked home in tears. The irony is that later in my life, I did start teaching (in creative writing) and loved it.

I went on to read English at Reading. I was then accepted as a trainee journalist on the Thomson Graduate Scheme. I spent six months in Cardiff where I had my first piece printed in the Western Morning News. It was a review of an art exhibition and I will never forget the excitement of seeing someone on the train to Penarth reading my piece! Then I worked in London on a trade fashion magazine called Drapers Record. Every week, I had to ring round all the big shops and find out what was selling well to write about current trends. I also interviewed fashion celebrities like Zandra Rhodes as well as Gertrude and David Shilling the hat designers. We had a cupboard of clothes left over from photo-shoots and were allowed to borrow them!

But I wanted to write about ordinary life and not just fashion. So I became features editor at Parents magazine (even though I didn’t have children at that point) and then Woman’s Own. One day, my editor sent me to interview a young actress. ‘She’s going to be really famous,’ he told me. I called for her at her London flat and we went out for lunch together. We got on very well and had lots of giggles together. The following month, her new film opened which also starred Michael Caine. Her name was Julie Walters…

Soon afterwards, I had a miscarriage which was deeply distressing. When I got pregnant again, my doctor advised me to have bed rest. So, I handed in my notice at Woman’s Own. After my son William was born, I picked up the phone and spoke to the then features editor on The Sunday Times. I asked why there weren’t any articles on miscarriage and she commissioned me to write one. This led to a long career of writing features about family matters besides two more babies. I worked from home which involved a lot of juggling. When William was small, I took him with me to interview Pam Ayres because I had no one to leave him with. Pam was very understanding and we stayed in touch for several years.

I married young at 22 and have three wonderful children as a result, William, now 35, is a qualified lawyer but gave it up to write novels.  He’s teaching English in Spain at the moment in order to support himself in the meantime. It can take time to get published. The writing gene does seem to run in the family. My youngest son, Giles is a journalist. He writes a music playlist for the i newspaper and also presents and produces on Soho Radio in London. My daughter Lucy is a teacher and very creative.

In 2005 my marriage ended. At the same time, my regular page for a woman’s magazine finished and I needed to find regular income. By chance, I spotted a newspaper ad that said ‘Wanted! Writer in residence for a high-security prison’. It was nearby on the borders of Oxfordshire and Buckinghamshire. I knew of the prison but never expected to go there. I almost didn’t apply because I was scared! But the salary was the exact amount—down to a penny—which I needed, on top of my maintenance, to pay my mortgage. At the interview, I had to meet the ‘residents’ to see how I would react. A big beefy man came up to me with tattoos down his arms and missing front teeth asking what I was doing there. I nervously explained that I was being interviewed as a writer in residence. ‘Hah!,’ he scoffed. ‘I can’t even read let alone write home to the kids.’ Suddenly a light came on in my head. I suggested he could speak it out loud and I’d write it down for him. I was offered the job. Over the next three years, I spent two days a week helping men of varying abilities to write life stories, poems, letters, short stories and even novels. Little did I know this experience was going to change my life and also inspire me to write four novels. I didn’t have an officer with me when I ran workshops or gave one to one feed-back on men’s writing. But I only felt unsafe on two occasions. The first was when a prisoner spat at me. (He later apologised.) And the second was when another ‘stalked’ me in the prison. It’s not considered good manners to ask what people did in prison and usually it’s best not to know because it can change your attitude. But I couldn’t resist looking up his crime on Google. After that, I made sure I was never alone again in his presence. It always took me a while to ‘settle down’ again after my two days a week at the prison. I would also constantly warn my children and their friends against taking drugs or drinking too much because many of ‘my men’ had committed terrible crimes as a result. Besides working at the prison, I also taught at Oxford University. On some days, I went straight from one to the other. I can honestly say that certain prisoners showed just as much talent as the students!

By then, I’d also been published as a romance author. But my prison experience made my writing grow increasingly darker! I began writing a novel about a woman lawyer who, like me, had never been inside jail before. She takes on a murderer’s appeal case and cannot help falling into a relationship with him. I called it My Husband’s Wife and it became a Penguin best-seller in 2016. Since then, Penguin has published Blood Sisters and The Dead Ex which also got into the top ten. My fourth novel I Looked Away comes out this summer.

After my second year at the prison, a friend (Shaun Corry) whom I’d known all my life asked me to marry him. I’d always been drawn to live by the sea. My father’s father had been a sailor and when we came down here, I just fell in love with Sidmouth. But I’d just accepted a contract for a third year at the prison and didn’t want to let them down. A prison officer happened to live in Devon too so I commuted every week in his van.

I feel so lucky to live in such a beautiful part of the world. I became a Royal Literary Fund Fellow at Exeter University where I helped students with the structure of their writing. I also helped to fund Sidmouth Literary Festival four years ago.  The sea really inspires me and I swim for eight months of the year. I am also fortunate because my daughter and her husband have moved here too.  I look after my grandchildren (aged one and three) for two days a week while they work. I consider myself very blessed.’