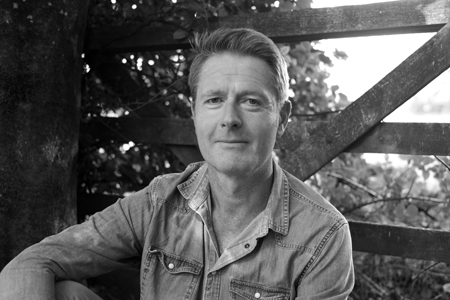 ‘Until I moved to East Devon with my wife and two daughters in 2006, I’d been a bit of a wanderer. I think this restless nature stemmed from being an army child. I was born in 1968 in Bahrain, and moved every two years from then on. We lived in Germany, Northern Ireland, London and Yorkshire, where I went to school.

It’s fair to say my A Levels didn’t go quite to plan and, as a result, the university course in history that I’d applied for fell through. As luck would have it, a friend was leaving a job and offered to put in a good word for me. The role was at a gallery in Knightsbridge called Crane Kalman. I was 17 and completely clueless about being an art gallery assistant but was somehow trusted by the owner, a Hungarian called André Kalman, to handle paintings by, among others, Monet, L.S. Lowry and Ben Nicholson. I wasn’t quite the replacement that Kalman had in mind. Although he was very gentle most of the time, he would occasionally lose his rag, berating my incompetence with a stream of heavily accented expletives.

After six months, another opportunity presented itself, working in the garden of a palazzo in Florence. Torre di Bellosguardo operated as a grand bed & breakfast, taking in paying guests to fund its restoration. Opening my shutters every morning, I was greeted by church bells and the rooftops and domes of the city, a scene straight out of A Room with a View. I spent eight months in Florence, trying and failing to learn Italian, picking up instead a rich vocabulary of filthy words from the head gardener, Nello.

Returning to London, I moved through a series of jobs—builder, decorator, toy maker—gradually developing a chaotic CV. Finally, after a stint as the barman of a swanky restaurant called Wodka, where I helped media types and celebs get legless on Polish spirits, I began heading in a more fruitful direction. I’d loved art at school and still painted, which is how I managed to persuade a family in Scotland to employ me to paint murals in their home.

The eccentric couple who’d engaged me were keen to ensure I had a social life when I wasn’t decorating their walls. One day, I was invited out for lunch and found myself in a castle and, to my slight horror, sitting opposite Barbara Cartland. Plastered in makeup and dressed in vivid pink, the world’s most prolific writer lectured me about etiquette and encouraged me to take up designing the covers of romantic novels. I soon discovered that painting pictures of partially clad women gazing adoringly at partially clad men wasn’t for me, but Babs did at least do me a favour. I realised that illustration, and murals for that matter, were not my thing, so I applied to study painting at art school. I gained a place at City & Guilds in Kennington, London, where I spent three happy, productive years.

After graduating with a first, I moved to New York because I’d become obsessed with 20th Century American art. I worked as a waiter and an assistant to an Abstract Expressionist artist, spending my spare time soaking up the city’s galleries and concentrating on my own paintings. I absolutely loved New York. I was in my early 20s and couldn’t have had a more intoxicating experience. My flatmate’s father was a friend of Quentin Crisp and one day we had lunch with him in an East Village diner. He arrived wearing a dusting of make-up, a wide-brimmed, purple felt hat and a silk scarf. He was witty, melancholic and fairly disparaging about the UK, which he’d left after suffering horrendous homophobia.

At the restaurant where I waitered, I was taken under the wing of the slightly sociopathic maître d’, a Sicilian called Sal. One evening he invited me to a party at his apartment in Brooklyn’s Carroll Gardens, where I was introduced to his pal, George. Sal intimated that George, a childlike giant, was a hitman who worked for the Gambino crime family. For some reason, George seemed to like me—possibly because he’d never met an Englishman before—and I cannot tell you how relieved that made me.

Much as I would have loved to stay in New York, I had friends and connections back in London so I returned, moving on to a houseboat by Battersea Bridge. This was such a happy period. It’s hard to describe the slightly weird sensation of being in a bath when the tide comes in and your home begins to float, or waking up to see the Thames a foot below your bedroom window. Summers were the best, with huge parties that spilled out on to the deck, our ‘back garden’ the Thames, the lights of Battersea reflected in its dark surface. Winters weren’t so glam. There was no central heating so we spent evenings stuffing our faces with huge portions of warming cottage pie while huddled around a gas fire watching the telly.

Being an artist was tough. I sold work but it was never anything close to a living. To boost the coffers, I launched a hand-painted silk tie business. I thought I’d hit the big time when Jeremy Paxman, who I bumped into while selling door-to-door in Notting Hill, bought twelve of my designs. For weeks the phone would ring at around 8pm or 10.30pm with friends telling me that they’d seen Paxman on University Challenge or Newsnight wearing my ties, but sadly this amazing free PR didn’t lead to a viable occupation.

It was around this time—the early 1990s—that I met my wife, Di, in the Stockpot, a cheap student café on the King’s Road. It was a chance encounter—she happened to be with someone I knew—and I like to think that the stars were aligned over London that day. She wisely saw that being an artist and tie designer, solitary activities that weren’t delivering an income, was not great for my mental health. My first proper job was at a marketing agency in Soho, as a copywriter—a role I have more or less been doing since, mostly in the charity sector. I have also written journalism, mainly travel pieces for the Guardian and Observer on places like Antrim, Ibiza and Eritrea. My last far-flung journey was in the company of my father, to Syria. It was an amazing trip, made all the more memorable by the kindness of the Syrian people. It’s heart-breaking to think how their lives have been torn apart since.

Words and narrative have become increasingly important to me. Over the years, I’ve developed a deep interest in talking therapies and in 2005, I retrained as a psychotherapist at university. I volunteered with Arc in Axminster for some years and now run my own practice.

In addition to the counselling, I also write fiction and have published two thrillers, Disorder and Denial. A passion for the written word is also behind my involvement in Shute Festival, which I co-direct with Samantha Knights QC. Now in its third year, the event has brought Sir Anthony Seldon, Esther Freud, Sophie Hannah and other leading speakers to our hamlet.

At the end of 2016, my friend Laurence Anholt suggested that we join forces, co-writing a rather unusual crime fiction series that he’d envisaged. The Mindful Detective books feature a Buddhist policeman, DI Vincent Caine, who lives off-grid on the Undercliff near Lyme, eschewing modern life for a solitary, meditative existence. But police work beckons when, in the wake of a very strange murder, he is enlisted by the altogether more frenetic DI Shanti Joyce, recently relocated to the West Country from Camden. The first in the series, Art of Death, will be published next year and we have just heard that World Productions, the people behind Line of Duty and Bodyguard, have optioned the first title. It’s incredibly exciting.

Writing has brought me another precious gift—the chance to work from home. I get to walk the beautiful paths of the Devon countryside with Di and our labrador, Lola. I regularly see my parents in Colyton. And every day I watch my amazing girls, Ella and Tara, grow up and find their own paths.’