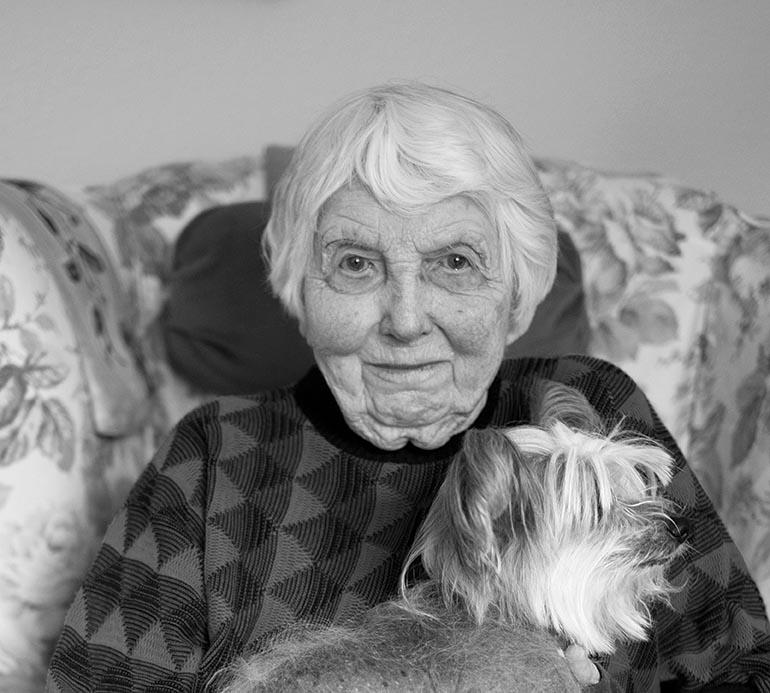 ‘I had a big celebration for my 100th birthday. My foster son, Ian, sent me a poem—all about me!

I was born in London one hundred years ago on 8th August 1915. I was a war baby but the wrong war. Unfortunately my father, Frederick William, was an invalid, he had Parkinson’s disease from quite a young age and my mother, Martha Gertrude (known as Maggie) had to go back to teaching. My headmistress was an appalling snob; I was at the school doctors one day, when she came along, the doctor asked how I was doing and she replied that considering my unfortunate background not too bad and added that my mother unfortunately taught board school (known as a council or state school in those days)!

I was an only child and spoilt! Or so my grandmother said. My mother used to tell me the story of when she grew up—Grandma was very strict. She told my mother that if she got into trouble it would be her own fault and the front door would be locked against her—and she meant it! Life was different in those days, most Grandmas now spoil their grandchildren, but I was frightened of mine. She always disapproved of me, particularly my diet; she said that child will never make old bones living on just baked beans and fried potato—I’ve always been a staunch vegetarian but I don’t like vegetables! It wasn’t spoilt Jean who didn’t make old bones, it was Grandma, who unfortunately died of cancer in her 60s. I was very close to my mother and heartbroken when she died of cancer in her 80s.

We lived in Woodford in Essex and I went to Loughton High School. One of my colleagues at the same school was Ruth Rendell—she was younger than me of course, but I met her at a reunion years later. I left school at 18 years, in those days you only went to university if you were going into a profession as a doctor or lawyer perhaps. Now I’m amazed at the funny things they go for, like Leisure or Photography, and things like that. After school I trained as a Nursery Nurse. I worked in hospitals including Guys in London—don’t ask me how as they normally only hire Norland Nannies. It was a different world then—at Guys you had to do an extra year and you weren’t considered a real nurse without getting the Guy’s certificate. One state registered nurse didn’t want to do the fourth year so she was in disgrace and sent to matron. The matron said “Nurse, how are you going to commit to a marriage contract if you can’t commit to Guy’s contract!”

I never got married, maybe because I pushed a pram for too long—it probably put the men off. I eventually sold my Millson twin pram to Barbara Barnes and so it went to the Royal family for William and Harry to be wheeled around in.

My real name is Evelyn but when I was born I was very fat—I weighed 11lbs—no wonder my mum didn’t want any more. My Uncle saw me and said he was sorry mum had such an ugly baby and what a shame you couldn’t see my eyes! My mother of course thought I was beautiful. He said I couldn’t be called ‘Ever Lean’ and that I looked more like a Bonnie Jean. So mother called me by my second name and I’ve been known as Jean ever since.

I moved to Poole, in Dorset, in my forties, somebody from the Church of England approached me and asked me to do some fostering for them—I thought this was big of them as I’d never actually set foot in a church unless it was a Spiritualist church. I lived with my friend, Ethel Knightley (known as Effie). She was my partner, but not in the modern sense of the word, but we lived together until she died eight years ago, far too young in my eyes, at 96 years old. Effie was a Health Visitor and a wonderful help when I had any problems. Like once, when one of my babies decided to forget to breathe and it was good Effie was there to help me. All the babies were pre-adoption babies; it was a terrible disgrace to be an unmarried mum in those days, so I had them for just six to eight weeks before they were adopted. I wasn’t allowed to know where they went. Social Workers just delivered them to me—it was all kept very secret. It must have been very sad for the mothers, but at the time I didn’t think how the mothers felt. I had two foster children, a brother and sister, from the age of two years old, until they went to school. I have kept in touch with them and their mother ever since. Ian and Anita now live in Bournemouth and Poole with their own families but we are all very close.

In 1982 we moved to a bungalow in Seaton to retire. I was with Effie for 54 years—such a long time to be with someone so lovely. I had a wonderful message from a medium who even gave me her name. Telling me correctly how she came to be known as Effie—because it was the name I’d asked if I could call her instead of her real name as I didn’t like the name Ethel. Then everyone called her Effie. Her fiancé had died from leukaemia so she is with him now. The only thing I will miss now is my dog and I would worry about him missing me, but I have a wonderful friend, Corrie, who will look after Jo Jo when I’m gone.

I used to swim in the sea twice a week but about 10 years ago I stopped and moved to the Flamingo Pool in Axminster. I’m better in the water than on dry land. I’ve always liked swimming, since my school days—we had an open air, unheated pool which was full of frogs by the end of the term. We must have been very hardy. I can only swim about six lengths now, but I still go twice a week; Tuesdays and Fridays.’’