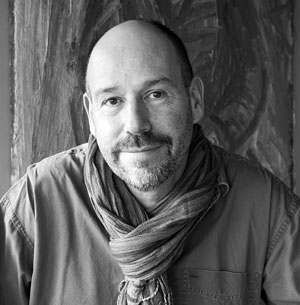 Julia Mear met Laurence Anholt at his home in Colyton. This is his story.

‘I’m generally a cheerful person so I’d like to think I didn’t make too much fuss when I was born on 4th August 1959 in Barnet. In theory that makes me a ‘Norf Lund’ner’ but it’s a bit more complicated than that because my father was a Dutchman with family roots stretching all the way back to Persia.

My siblings, Alison, Danny, Simon and I spent our early years in Holland and we went to little Dutch schools. Sadly I lost the language but what I retained is that celebrated Dutch liberalism along with a passion for Dutch art, especially Van Gogh.

My family returned to the UK in time for part two of my shambolic education. I went to a mixed outward bound school where—so it seemed to me, you could choose whether you went to lessons or not… I chose not! I left school at 16 with almost no qualifications and a general sense of bewilderment.

My father, Gerry had many good qualities but he was haunted by his wartime experiences. Perhaps it was understandable that he wasn’t a great mentor and maybe that’s why I went a little wild in my teenage years—there are gaps in my CV where even I’m not sure what happened! I worked in factories and kitchens and had a few adventures along the way. My main interests were English and Art and eventually I stumbled into the Foundation Course at Epsom School of Art where I grew my hair and threw some paint around.

At 18 I was staying in Oxford when I met a beautiful Irish girl, who became my best friend and partner for the next 35 years. Cathy was one of eight siblings; a student nurse who dreamed of becoming an artist. We had heard about the legendary Degree course at Falmouth School of Art, so the two of us assembled portfolios and hitchhiked to Cornwall. This was the late 1970’s and there were only 175 students in that hothouse of creativity. It was an amazing opportunity for self-discovery.

When we qualified we moved to London to take our Masters. Cathy went to the Royal College of Art and I studied drawing for three years in the scruffy splendour of the Royal Academy. We had not a penny between us, but I discovered a knack for carpentry and spent weekends and holidays building kitchens all over London.

Around this time, my parents had settled in Dorset and whenever we visited, Cathy and I felt rejuvenated by the woods and the hills. It was the start of a love affair with the Westcountry that many will recognise—the Blue Lias of the Jurassic Coast gets right under your fingernails!

When our first daughter, Claire was born in 1984, we were overjoyed. I wanted to be a different kind of dad and began to think of ways in which I could work from home. That’s when we started looking at those lovely things called children’s books. Perhaps this could be a way of combining my passions—writing, drawing and inspiring kids.

At the time I was working as an art teacher and I entertained my class with stories about maverick characters such as Picasso, Cezanne and Matisse. This led me to write and illustrate ‘Camille and the Sunflowers’, a picture book about the friendship between Van Gogh and Camille Roulin, son of the famously bearded postmaster in Arles. It was the first in what eventually became the Anholt’s Artists series, a first introduction to great art, seen from the perspective of real children. Another book was about Picasso and during my research I became good friends with Sylvette David, Picasso’s iconic Girl With A Ponytail. In the last 25 years my series has sold several million copies around the world, and I’m currently working on the tenth story, about Frida Kahlo and another real child.

In 1987 our beautiful twins, Tom and Maddy were born. And that’s when we discovered our Willy Wonka ticket… a couple of miles from my parents in Uplyme, we came across a rambling semi-derelict house with acres of tangled jungle, a walled swimming pool filled with something resembling vegetable soup, and views across the valley to the sea. Old Woodhouse had been long abandoned and it took years to put it straight—I spent many evenings on the roof with a hammer, but for sixteen happy years this was our family home, while the kids went to the excellent Uplyme Primary School and then to Colyton Grammar. A little later my brother, Danny moved to Lyme and took up the position of Director of Riding at Millfield School.

Making a living as an author or illustrator requires huge tenacity, but slowly our business grew. Alongside my artist series I wrote the Seriously Silly Stories, Chimp and Zee and eventually more than 200 children’s titles, many illustrated by Cathy. Our books are translated into 30 or more languages and have won several big awards. We took part in book events in Indonesia, Singapore and all around the world. Once we travelled to South Korea to launch a full-scale stage musical of my Van Gogh book.

I’ve always liked a project and I spotted a small shop for sale in Lyme Regis. Together with a group of friends, we constructed Chimp and Zee Bookshop by the Sea. It was a little wonderland for children with a full-sized oak tree inside and a monkey (called Mumkey) who rode her bicycle endlessly around the window. This was the UK’s first author-owned bookshop and it was even shortlisted for an HSBC Small Business Award. Chimp and Zee was a magical place, but what we liked less were the nuts and bolts of retail and when the UK fell into recession, we sold the shop and set Mumkey free!

A few years ago I began to write two full length novels: The Hypnotist and Love Letters. If picture books are hard, a novel is like building a house single-handed! But to my amazement, both books were accepted by the newly merged Penguin Random House. The Hypnotist will be published in January 2016.

I am embarrassingly proud of the kind, funny and courageous adults that our kids have become. Claire graduated from Cambridge and works at a senior level in the UN Secretariat in New York. She does amazing work with climate change, Human Rights, and campaigning against child soldiers. Her lovely French husband, Adrien works in Disaster Relief. Maddy is an actor, writer and radio presenter who has taken her one-woman show, ‘Maddy’s Many Mouths’ to the Edinburgh Fringe. Tom is an artist in Berlin and his gorgeous paintings sell as fast as he can produce them, in galleries in Germany and Denmark.

The downside of being a home-parent is how much you miss them when they are gone. The solution is usually a new project, and in recent years Cathy and I have restored another neglected gem of a house. This haven of peace and creativity has light-filled studios overlooking the shimmering Axe Estuary near Colyton in Devon. We feel incredibly blessed to live here, surrounded by trees and wildflower meadows, alive with birds and bees.

My mother, Joan Pickford was a wise and wonderful woman who died too young. Joan was a teacher of English Literature, especially Hardy and Wordsworth and although she was a Christian, she was fascinated by Eastern philosophy. It must have influenced me because I became a member of the friendly Buddhist community in this area. If I had more pages I would gleefully expound on the benefits of mindfulness and meditation, but one central concept of Buddhism is that our thoughts become our reality—a person who thinks negative or prejudiced thoughts creates a dark claustrophobic world for themselves; conversely those who train themselves to be positive and open-hearted find the world opening around them. Life is challenging, but life is beautiful too. We are profoundly privileged to walk briefly on this extraordinary bluegreen planet, revolving slowly in space.’