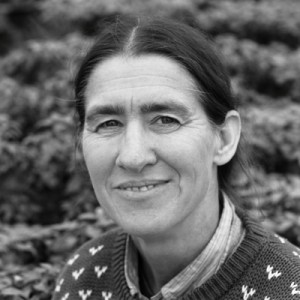 Robin Mills went to West Bexington, Dorset, to meet Joy Michaud. This is her story.

“I could definitely be described as a West Bexington person, but I wasn’t actually born here. My parents owned a house in the village, but in 1956 went to Nigeria, with two small children, where my father taught in the main secondary school in Northern Nigeria, and I was born out there. They came back here for holidays, but when I was two they returned for good, mainly because I was rather a sickly child and the intense heat of Northern Nigeria didn’t suit me at all. I was too young to remember anything of Nigeria from that time, but the funny thing was that when I went back, at the age of 19, I remembered the smells. All those tropical smells, I just knew them immediately so they must have been deep in my memory from my childhood.

I was involved with my parents’ farm from quite an early age, and as a teenager I’d be expected to help out most weekends with the animals and market garden, and that was the life I liked. I was very into horses, and we bred several foals which I trained, never very well, but I loved it. The first foal I had I had in shafts pulling a governess cart at 2½, much too young to ride, but that was my passion. I have four brothers and one sister, a big family, and we got on very well so with wonderful parents and a wonderful place to live, it was quite idyllic. As a child, the sea was ever present, I rode on the beach a lot and it seemed we’d swim and have a picnic lunch there in the summer every day. It’s strange that the sea’s no longer a part of my life these days. Bexington’s about the only village on the Dorset coast which is right on the sea; all the others are back inland a bit. The beach is very popular for fishing, and gets quite crowded in the summer, but that’s always been the case.

I went to Litton Cheney primary school, and Colfox at secondary level. All six of us did. I did well enough at school to get a place at Aberystwyth to study agriculture. For me, agriculture was a really good choice, although at the time I didn’t know what else to do. Aberystwyth was a small university town, a bit like Bridport, and I loved it, it was a really magical time for me. I got a good enough degree to be awarded a university grant to do a PhD, but decided to defer that for a year, came back and worked on the farm for a bit, then spent the rest of the time in Nigeria. There’d been so much family talk about it, and friends from Nigeria visiting, I had to go. I had contacts from when my Dad worked there, and got a job out there on a research farm. That was fantastic; I loved being part of another culture and all that entails. Though, for the first time I was seeing and experiencing real poverty. I worked with people whose whole family were living in a mud hut half the size of my living room. I’d be invited to their home, and there was one piece of meat in the soup they made. At first I left it as I thought it rude to be greedy, but then I was told that the one bit was there especially for me and if I didn’t eat it they would be insulted—normally they wouldn’t have any meat in the soup. I learned a lot about generosity and kindness and perhaps about priorities that we’ve drifted away from in our culture. I wasn’t in Nigeria nearly long enough, there was a visa issue, but after that I knew I wanted to use my skills to work in third world agriculture.

After my PhD I was offered a job with the Overseas Development Agency, but by then I’d already met my husband Michael so it was a case of either one or the other. However we were both determined to do overseas work as agriculturists; Michael had devoted his whole education to preparing himself for overseas agriculture, but as soon as he’d graduated the employment scene changed. After getting an offer of a job in the Gambia, which was withdrawn virtually while we were packing to leave, we got jobs in the Virgin Islands and moved there. I was the natural resources specialist for the US Virgin Islands, which meant I travelled around the Caribbean a lot; it was a lovely job and a wonderful place to be. But it wasn’t overseas development work, which was what we really wanted, and so after 5 years when we hadn’t found the right job, we came back to Bexington where we had already bought a house and land. We had bought the land first, and Michael, as an American, thought you could just build a house on the land if you owned it, which of course we couldn’t. But we were incredibly lucky as our house became available, with access to the land, at the right time.

Our land, which is 15 acres, is fine for a hobby smallholding, but much too small to make a living out of as a farm. We started growing vegetables and selling at markets twice a week at Dorchester and Weymouth. We had high hopes it would make us a living, but there was no way, it was impossible. It soon became apparent, though, that we needed other streams of income and Michael became an organic inspector for the Soil Association, and I took up editing work. The magazine editing was quite intense for a many years; as well as the Soil Association magazine—at the time called New Farmer and Grower—I edited the magazine for the International Federation of Organic Movements (IFOAM). This involved the whole project management, from commissioning to editing and typesetting the 40 odd pages. To do this I had to learn PageMaker on the computer. Nowadays, I only edit and typeset a small monthly magazine called The Organic Standard. When I started editing, there was no internet or email, so contributors would send floppy discs and I’d spend hours on the phone. Now, it’s so easy. With The Organic Standard, my publisher is Swedish, the commissioning editor is Spanish, and we have authors all over the world, most of whom I’ve never met.

From an early age I was into photography. As a child I set up a makeshift darkroom at home but it was at university where I really got into it and would spend days under the red light printing up photographs. As an editor I found I needed photographs so if I didn’t have a one for an article, I’d go out and take it. Then other magazines started getting in touch with me asking if they could use those photos. At the time, you could sell a good image of, say, a cauliflower for a minimum of £40, sometimes up to £200, but sell the actual cauliflower for 25p. So I started a slide library, taking photos of vegetables. In the end I must have taken 30,000 transparencies of vegetables all catalogued in filing cabinets. So for many years, I was doing editing and photography, which was making much more money than market gardening. There was a time I thought I might make photography my profession, but I couldn’t quite give up the editing, or the growing; then the heyday was gone when digital came in, and I think my heart went out of photography with that change. Some agencies will nowadays supply a digital image to a magazine for £4, any size. I used to belong to the Guild of Garden Photographers, some of whose members are the most fantastic photographers, but they’re all struggling now to make a living out of it.

Both the photography and the editing have now taken a back seat because of the way our growing business has developed. We work seven days a week. We sell vegetable seeds, testing every variety for yield, flavour and quality, making sure everything we sell is the best.  But chillies are what we’re best at. We do a lot of breeding—the Dorset Naga, one of the hottest chillies in the world is our variety—and probably half the chilli seeds we sell are varieties we’ve bred ourselves. We also grow fresh chillies and plants and take them to shows, festivals, any event really where we can sell plants and produce. We’re very lucky to be part of the huge change in attitude towards gardening and food, in particular the British attitude to eating chillies. Twenty years ago we threw away chillies we’d grown through lack of demand. Now we’re using Facebook and Twitter as part of out marketing drive. Who knows what’s next.”