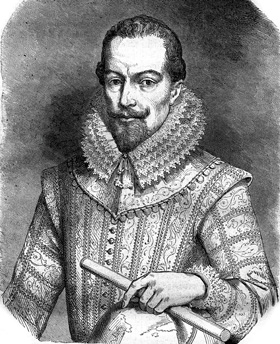 As a small boy I heard this sung on ‘the wireless’ and it came back to mind recently. I think the singer was probably a northern comedian, but I was too young to remember his name. He sang it as:

‘With my head “tooked” underneath my arm, I walked the
“Bloody Tower”, at the midnight hour’.

I asked my neighbour, an elderly chorist, if he knew the song and he sang it precisely as I remembered, and no more.
In trying to find more, I came across a song, or poem, by Stanley Holloway, around 1934, which differed and went: ‘With her head tucked underneath her arm, she walks the “Bloody Tower”, at the midnight hour, poor Anne Boleyn was once King Henry’s wife, until he made the headsman bob her hair’.
Now for the real ‘Historical’:
The Tower of London was built to control access and make a statement of power on the bank of the Thames for William the Conqueror in the 1070s, after the Battle of Hastings in 1066. It used part of the London Wall, a roman defensive to subdue London. The White Tower, built 1078, and 27 metres tall (89 ft), gave the castle its name. Outside, Tower Hill, is where some male executions took place on a scaffold, where many people could see. Building work in 1876 found remains, which were reburied.
However the execution of Queen Anne Boleyn took place on Tower Green, away from prying eyes. After execution, the headless body was swiftly buried under the chapel within the Tower, the Chapel Royal of St Peter ad Vincula. A marble plaque marks the spot where Queen Anne’s remains were found. In 1876 the remains were excavated and reburied in the Chancel, beneath a marble pavement, inscribed with names and coats of arms. Anne Boleyn, perhaps the most famous wife of King Henry VIII, married him around 25th January and gave birth to the future Queen Elizabeth 1st, on 7th Sept 1533. This was followed by several still births and King Henry thought she might never produce a male child, blaming Anne and God. She was committed on 15th May 1536 which led to her execution, on 19th May 1536, by a French swordsman, especially brought over for the purpose.
Catherine Howard (1521 – 1542) married Henry VIII in 1540, but was found guilty of intimate friendships with other men and so followed Anne Boleyn to the execution block.
Margaret Pole, Countess of Salisbury, who was related to King Henry VIII, was executed in 1541 by the axe.
Lady Jane Grey was Queen for 9 days, was related to other contenders to the throne, especially Mary I. She was deposed and executed in 1554. She was grandniece of King Henry VIII.
Having dispensed with some of the ladies, let us turn to the men. Noblemen were beheaded, as were noblewomen. However ordinary men and women were hanged.
Thomas Cromwell (1485 – 1540) became the right hand man of King Henry VIII, but eventually fell foul of various political factions and was executed.
Sir Walter Raleigh (1554 – 1618), one time favourite of Queen Elizabeth I, owned Sherborne Lodge, in Dorset. King James imprisoned him in the Tower of London and eventually had him beheaded.
King Charles I (1600 – 1649) had problems with funding wars and with Parliament, including religious dissention, leading to Civil War and his public execution.
Oliver Cromwell (1599 – 1658), was a Puritan who led the Roundhead side in much of the Civil War, and became Lord Protector. When Charles II was invited back to the throne, Cromwell was killed by a mob. His body was buried in Westminster Abbey after a ceremonial execution.
Simon Fraser, 12th Lord Lovat (1667 – 1747) was convicted of high treason and beheaded. This was the last execution by beheading in England. Hanging continued for many years.
Now for the ‘Hysterical’: enough of all this blood and gore. I have remembered another song, probably from about 40 years ago, on the radio. My recollection is that the singer was a comedian, with a London accent within hearing of Bow bells! Do not be confused by the title, it is not historical.

Bridport History Society meets on Thursday 14th July at 2pm in Bridport Town Hall, for a discussion about Migration, with entertainment from ‘Rough Assembly’, followed by refreshments.