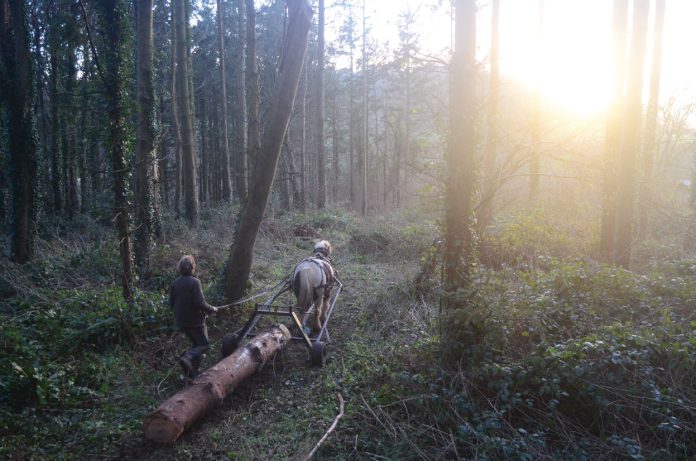 ‘The world doesn’t need more pockets of people doing things separately’, remarks Alex Toogood, a resident at Tinkers Bubble. Since 1994, the off-grid community has been located on the southern slopes of Ham Hill in South Somerset with the intention of working forty acres of land without using fossil fuels. In the following twenty-eight years, much has changed visually and philosophically. Residents have come and gone, as the seasons continue to shape them and their environment. A community of seven currently reside at the settlement, all individually motivated to participate in the dynamic living system at Tinkers Bubble. Residents spend their time producing food, maintaining their self-build settlement, managing a small-scale steam and horse-powered sustainable forestry business, and producing apple juice and cider for sale. In an exclusive audio interview, available on the Marshwood Vale Magazine website, Seth Dellow spoke with two of the current residents, Alex and Meg and gives us a flavour of the interview here.

Entering Tinkers Bubble is reminiscent of returning to a pre-Industrial Revolution era. There is a noticeable, and intentional, absence of mechanisation, intensification, and commercialisation. Spending my morning alongside Meg Willoughby weeding extensive beds ready for the next crop of carrots with only a garden fork epitomises this. Additionally, I interviewed Alex Toogood in his one room, round-wood, straw-bale house, which he has recently amended with timber from the surrounding woodland.
While working as a civil engineer in London and the Middle East, Alex, a resident of the Bubble for more than 18 months, recognised that the system he was in was broken. ‘I remember being quite stressed in London and… finding the city difficult and finding work difficult, but not knowing why’, he recalls. The commercial and corporate nature of the company he was working for was at odds with fundamental wellbeing, to the extent that ‘I felt that as stress and overwork and too much responsibility’. Alex left his job, spending a year volunteering, hitchhiking and wild camping across Europe before returning to the UK. Reflecting on his arrival at the Bubble, he admits that ‘here is where I can try and participate in a world that is healthier and knows it has more connection in it’. Alex cites the high volume of requests from people at that ‘stuck place’ to join the Bubble to demonstrate how the structure of modern life is detrimental to wellbeing. Therefore, in his eyes, Tinkers Bubble ‘is an attempt to come up with one form of an answer to that dynamic, that paradox’.
For Alex, participating in the Bubble forces him to confront the framings of the modern West. He observes how he’s ‘grown up in a world that’s taught me that my comfort and convenience is the most important thing… that’s the framing we’ve grown up with and here isn’t about that, and really life isn’t about that’. To him, the very vibrancy and dynamism of the natural world illustrates this falsity. Additionally, Alex identifies how the horticultural and hospitable pressures of living at the Bubble require being recalibrated ‘so we can be more well’. Yet, the widespread absence of this recalibration being role-modelled is problematic. ‘When I look at… politicians or celebrities or often leaders of groups, those behaviours aren’t often what’s there’. But, he adds, ‘when it comes to our personality and how we’re showing up in the world, we don’t know what we need to be an effective person tomorrow. It’s a whole different way of learning and growing’.
Addressing the problems of the Bubble itself also concerns Alex. ‘I’ve seen how, I think this project and others like it have come from a place as self-sufficiency being a buzzword… and for me, that’s part of the problem’. He advocates a move away from this in favour of learning how to have a healthy, connected, and generous relationship with the world; local volunteer afternoons at the Bubble are one of the ways he and Meg have attempted to achieve this. ‘Rather than the Bubble being a ‘bubble’ that is stepping back from the busy world and doing our own thing within our own hedges, it’s participating in a local network of other land-based communities and other social enterprises and other people’, he said. Questioned about whether this implied an ‘opening up’ of the Bubble, Alex responded ‘tentatively, I’d say yes and… in that, needing to learn our boundaries as well’. Later in the interview, he expanded on his position, stating that ‘when we’re opening up, we’re opening up to people and also our own behaviours are opening up, and different possibilities become available. And not knowing where that will lead us, I think, is quite exciting’.

For fellow resident Meg, who has lived in the community for a year and two months, Tinkers Bubble represents another way of living and working the land off-grid. Before joining, she lived at a community farm near Glastonbury but felt that it ‘was not kind of the way I want to do it’. Experiencing the Bubble provoked ‘flashbacks’ of ‘memories… there was quite a feeling of my child-self and my adult-self becoming connected like the same person’. This experience was in stark contrast to the disconnected city life Meg had known while studying Art in Brighton. She recalls how she would spend time in Somerset every six weeks while studying, and upon returning to Brighton, ‘within two days, I felt grey and kind of clogged down again’. Being at the Bubble has allowed Meg to go ‘through quite a process of stepping out of my body into the environment around me and realising they’re the same thing’.
However, Meg concedes that life at the Bubble can sometimes be challenging. ‘I find it very exposing… I feel like I have to learn to communicate quite cleanly a lot of the time and not hold onto things’, she comments. ‘I constantly feel like I’m having a bit of a growth spurt and having to push myself into contact that I find scary or uncomfortable’. Yet, these challenges are not solely confined to the Bubble, as they also emerge outside. Returning to Brighton last summer on the train, Meg reveals, ‘I was just crying, because I was like ‘everything’s dead!’. I’ve experienced… culture shock in a way I’ve never experienced before living here’. Yet, in her opinion, life at the Bubble ‘feels so right, it doesn’t feel like we’re doing anything that extreme’.
Discussing her future, Meg confirms that she will continue to reside at Tinkers Bubble for at least another year. She explained that ‘there is a part of me that is like ‘where would I go after this?’ It feels quite fundamentally clear to me that… I don’t want to live somewhere where I can’t grow my own food’. Additionally, there are many opportunities and possibilities afforded by residing in the Bubble. Echoing Alex’s thoughts, Meg identifies that ‘I can feel certain things opening up, so like I’ve increasingly become involved in… land work projects that are outside of here’. She mentions her involvement with the Green Scythe Fair and the Land Skills Fair. ‘Right now, I just don’t want to be anywhere else, I don’t think. There’s so much to learn here’, Meg concludes.
Consistent with the theme of ‘opening up’, Tinkers Bubble is hosting two events this year: a fair on the 13th August and its annual Open Day on 1st October. In addition, regular volunteer afternoons will take place on the 7th July, 4th and 18th August, 1st September, and 6th October. All are welcome to participate in these afternoons—contact tinkersbubble@riseup.net for more information.
The community are also fundraising to cover the costs of the steam engine repairs, and appreciate donations at www.tinkersbubble.org/engine. More information on the community and their events can be found at www.tinkersbubble.org.