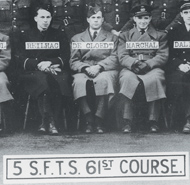 On 15 March, a poignant ceremony is due to take place on a Dorset hillside to remember a World War II pilot who died in a plane crash during thick fog exactly 80 years ago. Up until late last year, the incident was surrounded by secrecy. The airman’s story—pieced together by a farmer with Covid—had been forgotten until his name was read out in Broadwindsor Church
on Remembrance Sunday last year.
Margery Hookings tells the story.