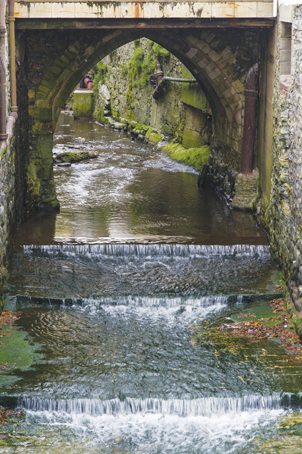 Way back in Autumn 2019 I wrote about “Rivers of Dorset”, followed by “More Grist for the Mill” and noted that the Domesday Book recorded that there were 372 mills in the County of Dorset, most used for grinding corn into flour. By some twenty years ago the number reduced to about 130, with only about 9 in satisfactory order, with only one being commercial.
During the recent Pandemic, at least one mill, having been renovated, has been milling flour again because local families could not obtain domestic quantities, owing to the shortage of lorry drivers. This was probably the mill at Sturminster Newton.
However, Lyme Regis Town Mill, also renovated, has been grinding small quantities for the tourist industry, since around the year 2000.
Recently my son, Nigel, said why can these idle water mills not be brought back into use and produce electric power? I tried to visualise the size and speed of the mill stone and also the system of belts used to power the ancillary parts of the mill.
My thoughts reverted to the old bicycle I use to ride to school, which was equipped with a dynamo, driven by a small wheel which pressed against the tyre. I understand that these are known as sidewall or bottle dynamos. From memory this did not produce appreciable friction of drag and when cycling at reasonable speed produced a good headlight and red rear light. I believe the dynamo produced about 6 watts of alternating power and some 6 volts, depending on cycling speed. These two cycle lamps would have provided useful illumination in a small room, particularly using modern low energy lamps. This was, of course, a day dream of childhood.
However, a modern electrical generator of around the size of a mill stone could easily power the lighting and power requirements of a complete house, including charging its electric car batteries. Also a standby battery could be charged “off peak” during the night, when the water would still be available to power the water wheel.
We believe one or two mills have been converted in Somerset, possibly one at Bruton, with some success.
Nigel arranged for us to join in an online meeting with a local council, relative to Climate Change. None of the councillors were receptive to our suggestion, possibly as most of the local mills are in private ownership and would need persuasion. They suggested that most of the local mills did not have sufficient head of water and may not be the most satisfactory type of water wheel. However, some of these mills must have been satisfactory in years gone by, although maybe not all the time, depending on the water level. Nigel also suggested that where rivers exit to the sea, where the water may ebb and flow, depending on the tide, for example at West Bay, there might be the possibility of using both ebb and flow to generate power. An expert in water wheel design is required, to choose the most appropriate type for given situations.
Even if the output from local small mills would be relatively small, surely if all were considered together, the total output might be worth having. Individual mills could supply their own locality.
Have the Government’s scientists, with suitable expertise, considered such proposals?
Readers may be interested in the bicycle I rode to school and many local excursions. It was a second hand Raleigh, with only the one fixed gear. I was a small child for my age and at 10 years old I could not reach the pedals. My clever father cut and formed pieces of wood to fit either side of each pedal, screwed together and at a stretch I could then pedal the machine. I think by the age of 11 years I had grown sufficiently for the blocks to be removed and I was able to cycle the two miles to my new school.
Bridport History Society meets again on Tuesday 8th March at 2.30 pm to hear about “The Green Man” from Dr. Lucy Goodison. (He may be looking at you through foliage, from a church wall !).