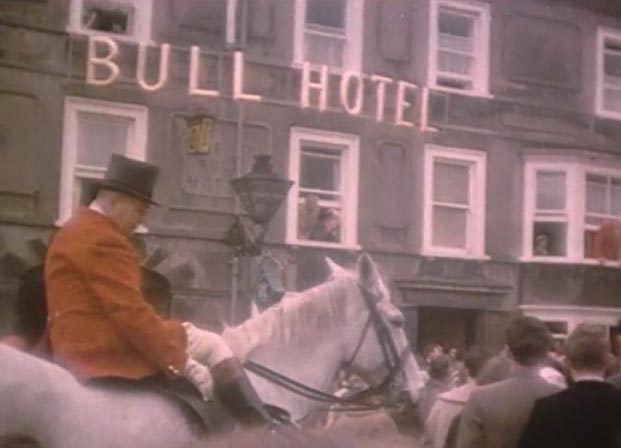 After the news last month that rural media charity Windrose, which preserves old film and runs community projects in Dorset, Somerset and Wiltshire, has been given a Lottery grant lifeline, Margery Hookings delves into the archives.

The Close Encounters Media Trail is a fascinating resource. Audio and visual stories from times gone by sit alongside those of the present, throwing the spotlight on the rural countryside not only as it used to be but how it is now for those who live and work here.
I’ve just been delving around it and it’s full of little treasures. Take Will’s Surgery, for example, where the prescribed medication is cider and plenty of it. The film was made in the 1960s on the Dare family’s farm at Shave Cross, near Bridport. It is presented by a very young Clive Gunnell for Westward Television.
This ten-minute film is up on You Tube (https://youtu.be/-P2s_jcGwTY) and is well worth a watch. I ended up crying with laughter at the stories told by the ‘patients’ and Will himself, all delivered in such wonderfully rich Dorset accents.
Clive Gunnell, leaning against an apple tree laden with fruit, a stick in his right hand, introduces the film. ‘It all started, I believe, many, many years ago when a man had a row with his wife locally. And he was feeling fed up and he went out and he slammed the door and he set off to visit old Bill. And he stayed here with Bill drinking cider for some time.
‘When he got back home he was feeling so good his wife said, “well there’s a change isn’t it, what’s happened to you since you went out?” and he said, “I’ve been up to the surgery.” She said, “where?” and he said “I’ve been up to Will’s surgery and I feel a lot better now.” Ever since then it’s been known as Will’s Surgery.’ The film shows the cidermaking process in the barn, accompanied by tall tales and a raucous rendition of To Be A Farmer’s Boy.
A fascinating film about the Symondsbury Mummers was made in 1953 by folklorist the late Peter Kennedy and his colleagues. Whilst researching Thomas Hardy’s father’s manuscripts in Dorset County Museum, Kennedy had found a 19th-century reference to a mummers’ play in Symondsbury.
Windrose director Trevor Bailey said: ‘They more or less caused the play to be re-performed, after having lapsed for a while, by digging out the script and talking to old players. It has gone on being performed ever since. The full DVD production we made includes the old film and interviews with Peter and modern Symondsbury mummers, plus elements of modern rehearsal, including one scene Peter did not film because it was thought a bit rude at the time!
‘Peter’s father was Douglas Kennedy who directed the English Folk Dance and Song Society’s affairs for a long time, in succession to Cecil Sharp. His aunt, Maud Karpeles, was also prominent in folk song collecting and worked with Sharp.
‘Peter referred to folk song collecting and performance as “the family industry”. He was one of the first people to get traditional singers on the BBC with his travelling show “As I Roved Out”. He accumulated an enormous archive of recordings in addition to making a few films.’
A short clip from Kennedy’s film, Walk In St George, is on Windrose’s Close Encounters website and also on YouTube (https://youtu.be/z9FCJvOR3l4)
The archive film footage is pure Thomas Hardy, and you can picture the people and performance as a perhaps a scene from one of his novels written more than half a century before.
The film is included in a Windrose DVD, Walk In Room, Walk In, along with interviews with Kennedy about the play, the making of the film and his thoughts about the significance of mumming.
Also featured are two of the recent mummers, Ken Bodycombe and David Warren, who tell how they became involved with the play and why it is still performed every year, and Bill Bartlett who played General Valentine in the 1953 film.
An even older Symondsbury can be seen on YouTube here: (https://youtu.be/WXKacgnuxOM). This 1930s silent film of Symondsbury At Work and Play from the Barge Collection features many of the villagers in their various roles. It’s rather poignant watching all these people going about their daily lives, making nets, building a hayrick ad working as wheelwrights, carpenters and gardeners.
The five-minute video on YouTube ends with a shooting party on Sir Philip Colfox’s estate where the young beaters enjoy a drink and lunch, all of them beaming broadly after a good day out.
Some of Windrose’s archive films have been put to music. Take, for example, Dope Under Thorncombe, a lively tale of derring do made by hairdresser Frank Trevett of Bridport in the 1930s and starring his family and friends. The 40-minute film takes place in and around West Bay and was set to a new musical score by Rachel Leach in 2009. You can see it on YouTube here (https://youtu.be/KRTTPTNs8gw).
Windrose Rural Media Trust director Trevor Bailey said: ‘It was shot on 9.5mm film, the amateur’s favourite film choice in the 1930s. It was an amazing project for local people to take on and has been crying out to be given its own special music and to be seen more widely.’ The film, accompanied by a live performance of the new score, was shown at Bridport Arts Centre and Burton Bradstock Village Hall.
On the Close Encounters website there are also photographs and audio interviews with people who have special links to West Bay today. These include Arthur Watson, who ran the Riverside Restaurant, who talks about the build-up to the D-Day landings when American troops were stationed at West Bay, and Margaret Grundell, who served ice creams on the seafront for more than four decades. Others include Jo Hawker, whose family have been involved in fishing for generations, harbourmaster James Radcliffe and Bridport electrician and keen fisherman Rob Stephenson.
To find out more about Windrose’s work, visit the Close Encounters media trail website http://closeencounters-mediatrail.org.uk/ and the YouTube channel https://www.youtube.com/user/windroseRMT