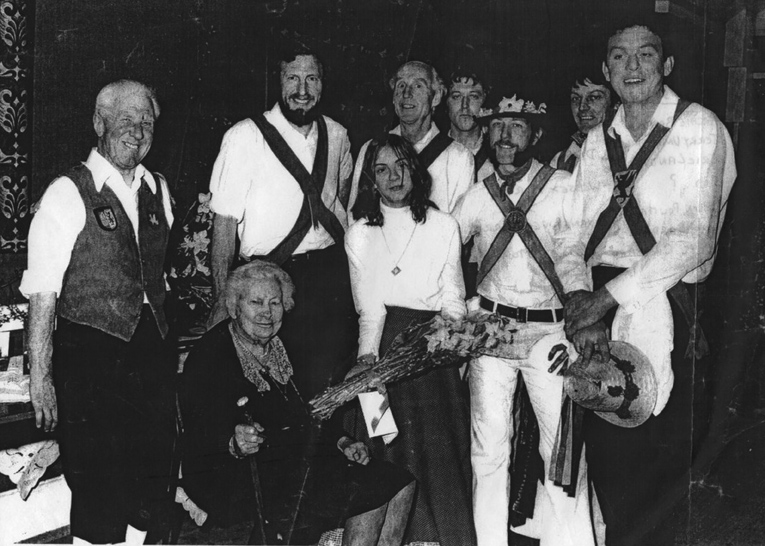 This year, Bridport Folk Dance Club celebrated its one-hundredth birthday. Monty Crook and Gwenda Selley take Margery Hookings through the minute books from the club’s formation to the thriving group it is today.

It was Sir Thomas Beecham who apparently said you should try everything once except incest and folk dancing. An objection to the first activity is completely understandable but what the British conductor and impresario had against the second, I really don’t know.

Beecham is also credited with saying ‘everything in music has its place; even a brass band, but its place is in the open air and twenty miles away.’

As someone who breaks out in goosebumps when I hear a good brass band, I’m happy to dismiss Beecham’s putdowns as the product of a witty if curmudgeonly mind.

My own experience of country dancing is—just like thousands of others in Somerset and Dorset—I learned it at primary school. More recently, I’ve enjoyed village ceilidhs and watching with great admiration the energy of morris dancers on the seafront at Sidmouth Folk Festival.

On Monday 19 September 1919, a group of women met in the Congregational Schoolroom at Bridport. Miss H D Kennedy, of the English Folk Dance Society, took the chair for what was to be the formal beginning of the Bridport Folk Dance Club. Previously, the Women’s Institute had taught country dancing in the town. There is still a relationship between the club and the WI, with folk dancing going on every Monday night in the WI Hall.

Though the club started meeting in the WI Hall in 1925, it relocated in 1960 following a fall-out over double bookings and hall fees. It took 37 years to move back there. Minutes from meetings over the century reflect changing times and world events.

One of the founding members was Miss Margaret Cox, a music teacher from the then Bridge House boarding school. In October 1920, it was decided to form The English Folk Dance Society, West Dorset Branch.

Cecil Sharp, the founding father of the English folk song revival, visited in January 1921 and established a local, officially approved teacher for classes in morris, sword and country dancing, with Miss Cox as one of the musicians. The subscriptions were 7s 6d per annum, amounting to £10.05 today. These days, annual fees have gone down to £2, although there is a £3 per session charge.

One hundred years ago, the MC was responsible for the programme and also for arranging teaching of new dances. This club now has a rota of several club callers which does this. One activity which has disappeared is a short time to be set apart at each meeting for folk songs.

The death of Cecil Sharp on 23 June 1924 was minuted the next day. In December 1924, a Dorset branch of the English Folk Dance Society was established, with strong representation from the Bridport club. Throughout the 1920s and 30s, club members performed at local and the All England festivals at The Royal Albert Hall.

Three hundred children attended the July 1927 festival of the Bridport branch and two members represented the county at the opening of Cecil Sharp House in 1930. A week-long festival of dance was held in Bridport in 1937.

Club records show a poignant break after the 22 September 1939 meeting, when a letter from a Colonel Deacon was read describing ‘steps… found necessary to take owing to the state of war which existed’ – and dance classes were ‘suspended until spring, when the situation should be reviewed …’

Club minutes did not resume until 20 October 1947.

After the Second World War, square dancing became popular and the use of a caller became the norm, which made the dancing more accessible for everyone. The club was now using gramophone records.

From the 1950s until the 1970s, Miss Marjorie Mayne, who had been taught to dance by Cecil Sharp, held an annual folk dance to celebrate her birthday. She had helped found the Chideock Morris Men in the 1920s, after having taught morris to the troops during the First World War. At her parties, young dancers were asked to perform. Locals, including club members, were invited. In March 1968, Bourne River Morris, sponsored by Miss Mayne, gave their first public performance on her 90th birthday and this became a tradition. She died, aged 98, in April 1976.

Local group The Yetties, who went on to worldwide fame, attended the parties in 1970 and 1973. Later, the club adopted the event as its annual dance with the participation of Bourne River Morris—until no one on the side remembered Miss Mayne. Miss Mayne’s Party is now held during April and continues to feature a ‘dance spot‘.

Back in 1919, the club had 44 members, but over the years the numbers have waxed and waned. In 2018-19, there are 33 members and regular attendances of more than 20. The club enjoys local bands and guest callers once a month and, in between, club callers entertain with CDs and a laptop.

For its centenary, the club commissioned a dance from international caller/choreographer/music writer Colin Hume, intended to acknowledge the rope-making history of Bridport. The dance is called Money for Old Rope, subtitled The Bridport Dagger—the well-known local nickname for the hangman’s noose, which by tradition was made from Bridport rope.

Having already had an outing at the last Eastbourne International Folk Dance Festival in May (as well as in America), it was performed in the packed Church House Hall on 5 October at the club’s party dance. Some 21 club members were among 70 dancing to the music of multi-instrumentalist Chris Jewell, with Ted Farmer calling. In the interval, the club enjoyed an Appalachian dance display from a new troupe, Aurora, whilst enjoying supper, a glass of bubbly and birthday cake.

So why do they still do it?

Monty Crook and Gwenda Selley say: ‘Club members invariably say the club is fun, sociable and keeps you fit. And would that small group of enthusiastic founding members recognise the club today? We’d like to think they would be pleased, if not a little surprised, that we are still here, keeping the tradition alive 100 years on.’