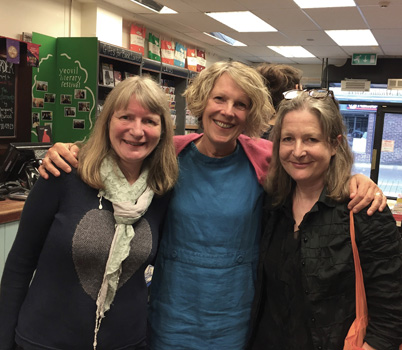 Why is that some locations have a special place in our hearts?
Is it the landscape, the people, the personal connection or the way some places can literally ground you to the here and now and also to the past and future?
Margery Hookings meets three Dorset writers for whom ‘place’ is all important.

Growing up as a farmer’s daughter in rural south Somerset, I know that the landscape, the fields, trees, animals and the seasons have a profound effect on me. I remember as a child of about six years old being taken by my mother with my siblings to Tarr Steps on Exmoor. I imagined a film shot of this ancient clapper bridge across the burbling River Barle panning out to the trees, the moor and a big open sky, all to the I Vow to Thee My Country melody in Jupiter from Gustav Holst’s Planet Suite. In my head, Tarr Steps will always be like this. Places evoke certain feelings and memories.
I feel similarly connected to Lewesdon Hill, especially at sunrise before the day really begins and no-one else is about.
Three writers from Dorset will be leading the discussion on ‘Spirit of Place’ at Bridport Literary Festival this year. They are Gail Aldwin, whose debut novel, The String Games, is longlisted in the fiction category of The People’s Book Prize 2019, Maria Donovan, whose debut novel, The Chicken Soup Murder, has been shortlisted for the Dorchester Literary Festival Local Writing Prize 2019, and Rosanna Ley, published by Quercus Books, whose latest novel, The Lemon Tree Hotel, is set in Italy.
The three of them have formed a writing triangle to discuss their work-in-progress and are looking forward to being part of the festival. It will be the first time they will have taken to the stage together.

Maria Donovan
I’m a native of Bridport. As an adult I have gone away and been drawn back many times. I lived in the Netherlands and trained as a nurse there. Back in the UK I gave lessons in juggling and travelled around Europe as a performer and musician. For many years I was in Wales, first as a student and then as a lecturer in creative writing. On a trip to Dorset, I met my husband when the wheel fell off my car outside his house in Melplash. We moved to a smallholding near Aberystwyth but after he died I came back to Bridport, where I now live and work full time as a writer.
The love of a town or a landscape can get right into your bones. That’s how I feel about Bridport and West Dorset. For me the spirit of a place is affected by its present, past and future. People and other creatures matter too, and the knowledge and associations we bring from memory. It’s always dynamic.
In my debut novel, The Chicken Soup Murder, I combine observations of Bridport and Cardiff, as they were in 2012, with memories and invention. It begins with a sense of a childhood paradise that is lost when loved ones die and new, disruptive characters move in. The place is not outwardly much changed but its spirit is altered.
Even unhappy experience is useful in fiction. For instance, in the short story Transit of Moira from my collection, Pumping Up Napoleon, the many times I took the bus from Yeovil at 6pm in the 1990s inform the feeling of what it might be like to be a cleaner on a run-down space ferry trundling between Earth and Moon. The ‘ferryman’ no longer sees the wonder of it all: writing and reading can help connect us with a sense of the strange in the familiar and the familiar in the strange.
Leaving a place we love can feel like a tearing away that is troubling to our own spirit, while the spirit of the place itself continues quite well without us. Rejoining with the spirit of a place feels like healing. Now that I’m in Bridport again, I miss the quiet fields and pine woods near Aberystwyth, the mountains behind, the kites overhead and not a house in sight between me and the sea four miles away. When I go back to the Netherlands I get excited about windmills, bicycles and storks. But every time I walk through Bridport I feel the thrill of being back where I grew up. I love to experience it as it is now and at the same time memories are stirred at every step.

Rosanna Ley
Place has always inspired me—to travel, to explore, to write—and it may be that hard to define ‘spirit of place’ that ignites the inspiration. It’s partly the landscape, but also the culture, the people, the atmosphere and the sense of history that makes up this ‘spirit’ that can be such a seductive draw.
Certain places have seduced me into wanting to move there (West Dorset is the best example of this), into travelling there as much as possible (Italy is my favourite; I can’t keep away) and of course into writing about them. I have set books in Spain, France, Italy, Morocco, Cuba, Sicily, Fuerteventura, Burma and West Dorset. Every place brings something different to the party.
For me, the sense of place in my novels is as important as any other element—for example that of plot or characterisation. In fact, it’s integral and intertwined with both. Place can even be the original seed from which the rest of the novel grows.
West Dorset’s unique spirit of place drew me here some years ago and I worked to make it my home. It inspires me—I love it.
We are fortunate, in Bridport, to have our own literary festival and I’m delighted to be part of it this year. As a panel, we will be discussing how we use sense of place in our writing and what spirit of place means to us. We look forward to discussing this with anyone who would like to come along to listen and hopefully join in—whether they are writers or readers or both.

Gail Aldwin
There is a quality about place that is absorbed in a sensory way. When I think about living in Papua New Guinea, I listen to the rain plinking on the corrugated iron roof and wait a few seconds for the deluge of the wet season to begin. I watch the earth turn to the colour of cocoa and I remember stepping outside and being drenched by rain that turned my hair to string and gushed over my eyelids and lips. I use what I learnt about living near the equator to write about other countries with similar weather patterns and climate.
Something about the spirit of place gets under the skin of my characters and sinks into their bones. They become the essence of where they’re from, where they’ve been and where the action of the story takes place. This inheritance of the places they’ve known informs their reactions to the obstacles I present to them through the plot.
I moved to Dorset in 2006, somewhat reluctantly. I had an interesting job in London, my children were settled in good schools and I loved my suburban home but when my husband was offered a new post, we moved. It didn’t take long for the spirit of Dorset to do its work. I secured a job on a teaching service that required me to visit schools across the county. There isn’t a better commute in the world than driving through the Dorset countryside.
I am so looking forward to joining Maria and Rosanna as chair of the Spirit of Place panel discussion. We three have made Dorset our home and between us we have substantial experience of locations that are remote and beautiful, surprising and sensuous, accessible and exciting.