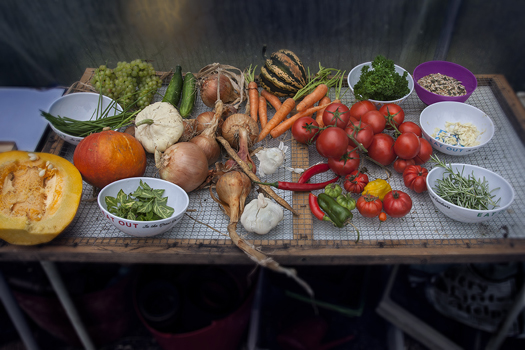 A school garden project in the heart of Bridport won a special award this year at the Melplash Show. Margery Hookings visited the edible garden to find out more about it. She was very taken with what she saw. Photographs by Robert Golden.

I’d read about the garden project at St Mary’s School, Bridport, but it was not until actually seeing it, smelling it and just being there that I grasped the importance of this little oasis on the edge of a large housing estate.
Poly-tunnels, hens, carefully labelled fruit and vegetable plants jostle for position in this green sanctuary, as pupils tear around in the playground during the break.
A clay pizza oven, made and used by the children, sits under a shelter and is used for baking. Up in the school kitchen, Amanda Downes and Mel Hayter turn out healthy and interesting meals using produce from the abundant garden.
Children learn how things grow and then how they’re cooked before tucking into them. In this fast-paced world where convenience food can often be king and some people forget or never know where their food comes from, such a project, which includes family cookery workshops, is a real tonic, a great add-on to everyday school life.
The garden and food growing work at the school in Skilling was started by Home in Bridport, a community organisation which became a charity over a year ago, founded by Robert Golden.
It’s just one of the strands of Home in Bridport, which aims to help create local employment while celebrating local life in a beautiful rural land and seascape. According to the charity, its beginning point is always within building trust and friendship through cultural work—film, photography, music, literature, theatre, fine arts, agriculture, growing food and helping people to learn about preparing healthy inexpensive meals.
The school fruit and vegetable garden was revived with the help of a privately-donated poly-tunnel and help from Groves Nurseries, Modbury Farm, and J C Phillips.
Cookery classes, under the direction of Amanda and Mel, and for children and their parents take place every other week. Two teachers and two part-time gardeners, Tia Perella and Mitch Burt, were sponsored by Home in Bridport to attend a Royal Horticultural Society course at Bath City Farm where they learned about ideas for children’s gardening clubs.
Back in 2014, a group of volunteers from Transition Town Bridport and Home in Bridport installed a poly-tunnel in St Mary’s Primary School in response to the national and local concern about childhood obesity. The school is in the catchment area of the Skilling estate, and the project was aimed at tackling food poverty and supporting an increase in the take-up of free school meals. The food grown is used in the school kitchen and fruit tuck.
In the four years since the garden has been in operation, school meals have become more popular but there were concerns about waste, especially vegetables. With a grant from Awards for All, the team planned a project, linking up with Peas Please, to start promoting vegetables through growing, preparing and eating together.
In April 2018, the project was launched at a whole school assembly.
A nutritionist ran a series of workshops with the older pupils, which involved basic food choices for health and pleasure. Fun tasks were created to discover different tastes and to understand the role of all the senses in eating. Head cook Amanda and two food educators led a five-week cookery course for parents and children using only fresh vegetables. Participants were then given a recipe book containing all the dishes from the course. The two part-time gardeners worked with pupils to grow legumes from seed. A ‘Legume Castle’ was planted and harvested throughout the summer.
In June, an open afternoon showcased the edible garden. The cooks also led workshops in the children’s marquee at Bridport Food Festival.
The project culminated with a harvest celebration in September, where the whole school picked and podded dried beans, made pumpkin soup, baked bread and shared a meal together.
Tina Ellen Lee, who works alongside Sarah Wilberforce of Transition Town Bridport in fundraising for the garden project, said future development plans included a woodland garden, designed by Key Stage 2 pupils, which incorporated a pond enclosure near the school.
“This would be a reflective garden for reading, which would also be a resource for some of the forest school activities.”
“We will also be growing more woodland fruits and produce and there will be some artwork, possibly a mosaic which the children will design.”

To find out more about project, visit home-in-bridport.weebly.com