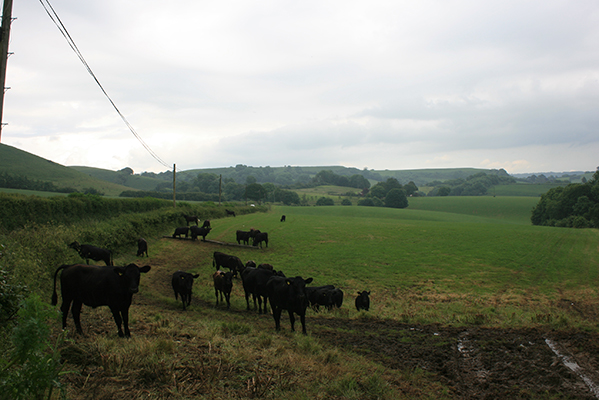 Waddon Hill, in the very west of west Dorset, is a long ridge, joined at the hip with its parent peak, Lewesdon Hill, which at 279m, is the highest point in Dorset.

From the top, the view is rather wonderful, although you need the landowner’s permission to be there as the nearest public footpath only skirts around it.

To the south is the sea and in the east you can see the few aerials still left of the former World Service transmitting station at Rampisham Down. Then your eyes sweep down to the wooded Powerstock Common and the ramparts of Eggardon Hill. To the north there is Somerset and to the west—well, that’s where Lewesdon Hill gets in on the act, as if to say in a motherly-like way: “Pipe down, pipsqueak. I’m the senior one around these parts.”

This was once one of the most important Roman forts in this part of Dorset and thought to have been a base for the Roman advance of the Second Legion after the invasion in AD43. It’s still the best local example today.

Further inland, the Romans made treaties with various tribes but in Dorset, the Durotriges, the local Iron Age people, put up a strong resistance against the invaders. Over the years there were many battles and it was in this time that the Romans built their hill forts.

In those days, Waddon had earthen and wooden defences, within which were timber buildings housing soldiers, officers and horses.

Historic England confirms that the fort at Waddon Hill ‘apparently had a mixed garrison of legionaries and auxiliary cavalry, although as a large part of the site has been destroyed by quarrying, the details can never be clear. It continued in use until after AD 60.

‘A substantial part of the fort has been destroyed by stone quarrying but the excavations showed that it was about 270 ft wide and at least 400 ft long.

‘In the central area various timber buildings were found; these were identified as the principia, praetorium and possibly the valetudinarium. Although some native pottery was found there was insufficient evidence to suggest an Iron Age occupation on the hilltop.

‘Later excavations up to 1969, revealed more timber buildings which could be barrack blocks.’

It is thought to have been used for about ten years until AD 60 when, after 17 years of occupation, Boudicca, Queen of the Iceni tribe, led a bloody revolt against the Romans, which nearly succeeded. Roman troops from all over the country were needed to quell the uprising and, from then on, the temporary hillfort on Waddon Hill was not needed again

Bridport Museum, some six miles away, is home to an extensive collection of artefacts from the hillfort, from four benefactors. It includes coins, brooches and a quantity of military equipment, buckles, plume holders and a scabbard guard.

James Ralls, a Bridport ironmonger, used to spend his free time in the 1870s digging up objects from the past at Waddon Hill. According to the museum, towards the end of his life he used the collection as a security for a loan from local landowner T A Colfox. Ralls died before repaying the loan and the collection passed into the ownership of the Colfox family, who donated it to the museum in the late 1930s.

Finds have also been given to the museum by the Tolley family, who have farmed Waddon Hill since 1898. They supported the work of Dr Graham Webster, an eminent archaeologist from the University of Birmingham, who excavated the site over a ten-year period in the late 1950s and 60s.

Today, as well as viewing the collection at Bridport Museum, visitors can also dress up like a Roman—although they might need a slave to help them on with their toga.