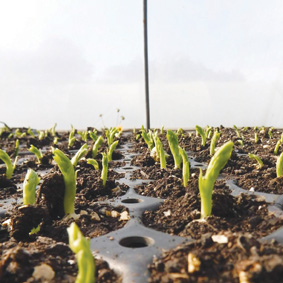 Although we have been planting through March, April is the time when planting in the market garden really gets going. Because we are producing veg to sell we start seed sowing really early, using heated benches in the propagating tunnel to get things going. However, on a home scale this isn’t necessary and without heated benches you can still propagate most things for your vegetable garden without a heated bench (other than things like tomatoes, peppers, aubergines which you might need to buy in as plants).
If you do end up propagating your own plants the two main concerns are getting enough light and airflow. Without good light the plants will grow spindly as they stretch out to reach the light. This is not ideal as they can be weaker plants and much more susceptible to pest and disease attack. Starting seed sowing on windowsills can be ok as long as it is a south facing window and the seedlings are getting plenty of sunlight. Ensuring good airflow around the seedlings will not only help to strengthen them but will also minimise the chances of fungal infections. In terms of watering it is best to do this from the bottom (have the seedling trays sitting in another tray that you can pour water into)—this means that you are not getting water on the leaves. Many fungal diseases need high humidity for their spores to germinate, so making sure the leaves are dry takes away the chances of this.
If you are germinating hardy plants rather than things like tomatoes, beans, peppers etc. then as soon as they have germinated you can put them in a polytunnel, or a cold frame which will help them grow stronger rather than keeping them inside on a warm windowsill. You can also open up the coldframe or polytunnel on warmer days to ensure good airflow. Any plantings this time of year get covered with fleece (make sure you use 20gsm or higher as this is thicker and will last longer than anything thinner that will quickly rip). Most of the time we put fleece directly over the newly planted crop, weighing the edges down with sandbags and pulling it tight so that it does not flap around when it’s windy. On more tender crops whose leaves might get damaged (like lettuce for example), it might be best to put some hoops up to support the fleece so that it is not in contact with the leaves of the plants. This may also reduce slugs a little. The fleece usually stays on until early to mid May as long as there aren’t any frosts forecast—best to keep it handy just in case of any late frosts though.
April is a busy month with a lot of planting for us, which involves a lot of preparation of beds. As we have moved away from cultivating so much we have been relying on autumn sown green manures to keep the soil in good health over winter. These were then mown down and covered with black plastic earlier in the spring, and when planting time comes round we just fold up the plastic, remove any perennial weeds and then rake the bed out before planting. It’s a relatively quick and easy approach to preparing the beds, and we do not have to wait for the soil to dry out as much as when we are cultivating it, so we can get on and plant much sooner than when we were relying on cultivating for the early planted beds. Let’s hope for a dryish month so that we can get all these plants that we have queueing up to be planted!!

INSIDE: If you sowed any early salad crops for a polytunnel or glasshouse they can go in at the beginning of March. Also successions of peas and spring onions will continue to be planted. By the end of the month you can get away with planting French beans, cucumbers and tomatoes in polytunnels or glasshouses, but it’s still pretty early so don’t worry if you don’t get round to it!

OTHER IMPORTANT TASKS THIS MONTH: If the weather dries, continue preparing beds for the spring for planting. Keep on top of the seed sowing, but don’t sow too much of anything—think about sowing successionally rather than doing one big sowing in early Spring. Things that are perfectly suited to successions include all salad leaves, spring onions, peas, beans, beetroot, chard, kale, carrots, fennel, radish and annual herbs.