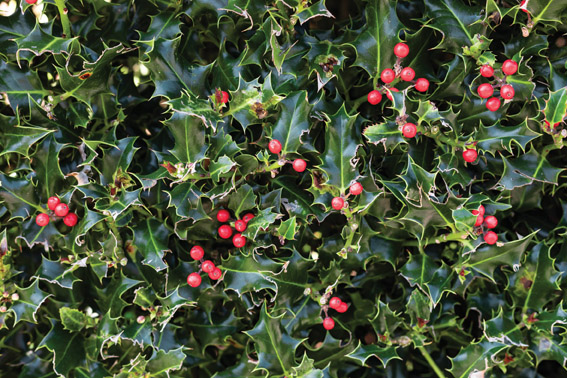 It’s certainly been a very strange old year. Perhaps now, more than ever, the cyclical and perpetual rhythms of horticulture can provide an anchoring point to those fortunate enough to have access to a garden. One thing, that seems to have been universally acknowledged, is that many folk have found solace in a return to nature, including gardening, during the this year’s lockdown periods.
December sees the ‘official’ beginning of winter which is, for most of us, not the most cheery season. The old pagan festivals, more latterly assimilated into Christianity, that venerated the permanent life-force contained within evergreens, have a relevance to your own garden. It’s an oft-recommended piece of garden design advice that including a ‘backbone’ of evergreen trees and shrubs means that your garden need not ever be barren, even during the coldest months of the year.
To maintain the semblance of a vibrant, living, garden in the dark days of winter you will need to have a fair smattering of evergreen specimens among the herbaceous perennials and deciduous shrubs. Using evergreens as part of a mixed hedge is one way of doing this or, for a more formal boundary, a single evergreen species hedge, like yew, box or holly, really comes to the fore at this leafless time of year. A dark green yew hedge, clipped nice and tight just once a year, is the classic backdrop to a long border, or used instead of a fence as a solid boundary marker.
If you use an evergreen hedge as a foil to a herbaceous or mixed border then there’s one maintenance issue that you will have to keep on top of. The hedge, like any long-lived plant, will grow an extensive root system which will, naturally, invade any bed or border nearby. These feeding roots can out-compete the more delicate, less permanent, root systems that the herbaceous perennials grow on an annual basis. Plants that die down completely in the winter, the definition of a herbaceous perennial, do not need a large, permanently active, root system.
This autumn I’ve been renovating an established pair of herbaceous borders which run between parallel yew hedges. Some normally vigorous perennials have been failing to thrive, even the usually rampant Macleaya cordata, and, upon digging up and dividing, I discovered that they were competing with a solid mat of yew roots. The fibrous feeding roots of trees and shrubs can certainly deprive more transient plants of the food and water that they require in the growing season.
The solution is to run a spade up and down the back of the border, as deep as you can, on a regular basis, so that the feeding roots from the background hedges are severed before they can invade the borders. Their deeper, anchoring, roots are unaffected and established trees and shrubs will not suffer from having their surface roots kept in check. An extreme example, of this root pruning, is ‘bonsai’ and specimens of trees that have been subjected to the ‘Art of Bonsai’ can live for centuries.
You will never totally prevent the growth of trees and shrub roots, into ornamental plantings, but regular lifting and dividing of herbaceous perennials allows you to keep invading roots in check and also to add fertiliser, humus and aerate of the soil in which your more precious plants are growing. It evens up the playing field, as it were, to keep everything growing nicely.
Other gardening activities that you can be getting on with, whenever your mood and our fickle weather align, include warming work like digging, clearing and maintenance. Bare-rooted trees, shrubs and hedging plants can be planted when conditions allow but are best kept ‘heeled in’ if they arrive at a time when you can’t plant them immediately.
An evening spent perusing all the fabulous rose varieties, offered by online rose suppliers, is a complete tonic even if you don’t actually have room in your garden to plant any more. If you do have space, to add another rose or two, then buying now, as bare-rooted specimens, is the most cost-effective way of getting them.
Many online rose suppliers have also diversified into offering other plants, which are suitable for bare-root production, so it’s a good way of adding further layers of interest to your planting schemes which you might not otherwise have thought of. The good thing about herbaceous plants, those which are vigorous enough to cope with being lifted and transported in a bare-root state, is that they also tend to be the sort of perennial which establishes quickly and is largely trouble-free. Hardy geraniums are a good example of this kind of easy-going plant
Elsewhere, check that any remote heating in greenhouses or coldframes is working properly and is ‘kicking-in’ to keep the space frost-free when overnight temperatures plummet. Conversely, whenever we have one of those bright, sunny, spells, it’s really advantageous to open the doors / lid / vents to keep the humidity down and to reduce the yo-yo effect of soaring temperatures, under glass, when the sun shines which is, inevitably, followed by sub-zero temperatures overnight.
As I write this, during the second lockdown, the one saving grace is that garden centres are still open so, if you or a loved one have rediscovered a passion for gardening, thanks to Covid-19, it’s still possible to treat yourself or someone else to a horticultural pressie or two. Merry Christmas indeed!