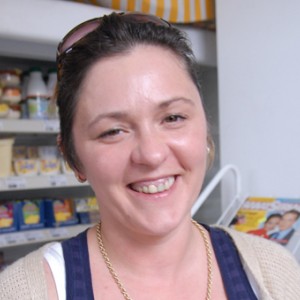 Big things come in small packages, an aphorism as true for gifts as it is for the diminutive Polish Delicatessen in Weymouth. Located opposite the train station, the Tardis-like shop sells thousands of Polish foods and drinks in an area the size of a large living room, and though a visit to the shop may not be the same as going to Poland, it is certainly the next best thing.

The shop was opened about a year-and-a-half ago by Marieta and Norbert Kaminski, a Polish couple who have lived in the Portland and Weymouth area for seven years. Norbet is a self-employed builder, leaving Marieta to run the shop on a daily basis. Marieta isn’t the only one in her family in the food business: her brother runs a Polish restaurant – the Kaskada – in Yeovil.

But why a Polish shop in Weymouth? The answer is simple: because the customers are there. Enough Poles live in the area to justify a bi-weekly Mass said in Polish at the local Catholic Church. Added to their numbers are a smattering of Russians, Czechs, Germans and Lithuanians, and together they buy enough to make the shop a going concern.

Almost everything in the shop comes from Poland, the only concession being the bread, which is supplied by a Polish bakery in London. Because the shop sells about 3000 items, keeping it fully stocked requires attention to detail and some amount of work. Norbert used to make weekly buying trips to Poland, though this is fortunately no longer the case: someone over there now makes regular deliveries to Weymouth.

If the Kaminskis’ goal is to create a complete one-stop food shop, then they have almost succeeded. They stock everyday items like breakfast cereal and eggs; as well as more obscure ones such as couscous and a red-coloured powder used to make instant beetroot soup. Fresh meat is in the minority, but compensation comes in the form of refrigerated cabinets laden with all manner of prepared meats and sausages, many of them unknown outside the Polish community.

Fresh produce makes only an occasional appearance, though a frozen food cabinet in the corner of the shop contains bags of vegetables, most of which are found in typical British outlets. A quick prowl through the cabinet also turns up packages of pierogis, small, fat dumplings stuffed with either sweet or savoury ingredients. Looking vaguely like miniature Cornish pasties, they are warmed up in boiling water and served, according to the packaging on one of the savoury versions, ‘with a sauce of your choice’.

Polish cooking wouldn’t be complete without kapusta kwaszona, shredded and pickled cabbage better known in Britain by its German name, saurkraut. It is a strongly-flavoured preserve characterised by both salty and sour tastes, and depending on what is available from the supplier, it comes either in pre-weighed plastic bags or generously-packed barrels. Either way, it is a popular addition to all manner of savoury dishes, including pierogis and stews.

Drinks play a prominent role in the shop and include Polish beers such as ‘Lech’ and ‘Tyskie’ and two well-known brands of cola – complete with Polish labelling. The beers, however, are nothing special, and the colas can be bought anywhere. The real stars of the drinks department are the deeply-coloured fruit syrups that come in strawberry, cherry and raspberry flavours. Thick and rich-tasting, they are diluted with water to become the perfect drink for a hot summer day.

Though the shop’s products are labelled in Polish, a few also come with ready-made English translations. These translations are more the exception than the rule, and according to Marieta, the council has told her that everything must be labelled in English. She now has the onerous task of doing the translating herself and is slowly but surely working her way through the stock. Despite the effort, there is one upside to all the tedium: English-speaking non-Poles will have easy access to a whole new world of food.

Unlike Thai, Italian and Indian cooking, Polish food is not at the top of the gourmet league table. Granted, it is not the most delicate of cuisines, but prepared by an expert, it offers a complexity of flavours and textures that rival its better-known counterparts. Fortunately, Marieta is a generous and gracious guide who dispenses sound advice on the intricacies of Polish cooking, and for culinary explorers looking for a new eating experience, the Polish Delicatessen is the place to go.

The Polish Delicatessen is on King Street in Weymouth.