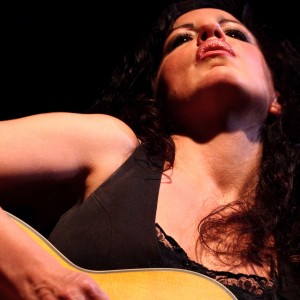 It’s natural for reviewers, critics and journalists to want to categorise the people they write about. Without some sort of benchmark, classification or standard it is hard to measure relevance to the world we live in. However it’s also sometimes too easy to write someone off or dismiss them because they are easily categorised – that may simply show a lack of imagination on the part of the writer. As a musician, a writer, painter and poet Sarah Gillespie doesn’t present any of these problems. Although she doesn’t necessarily defy categorization she is still utterly unique. Her latest CD In the Current Climate with Gilad Atzmon is due to be officially released in January and touring the UK she will play at the David Hall, South Petherton on January 14th. John Fordham in The Guardian described her as, ‘an incandescent new presence’, whilst The Independent pointed to her ‘haunting tunes and striking lyrics’. Other reviewers have described ‘wry lyrics and sinuous melodies’ and ‘poetic songs and wonderfully colourful arrangements’ whilst one suggested, ‘Gillespie’s voice has more balls than a lot of men, and her stage presence is palpable’. So it might be safe to categorise her as utterly unique.
Although she didn’t write down the words to the first song she wrote until she was about nine, Sarah remembers making up songs as a four-year-old. She remembers thinking that she was being naughty by making up new lyrics to the tunes she heard, instead of learning the original words. She began to play the piano and although she wrote hundreds of songs with it, when she was about fifteen she ‘begged and begged’ for a guitar. One day she came back from school and there is was. Her interest in music was obsessive and she taught herself. “When I was a kid listening to music, it wasn’t enough for me to listen to it, I wanted to climb inside it” she says. “It was a sort of frustration that egged me on to practise and practise – it was more of a compulsion.” Her father was a huge music fan introducing her to what she remembers as “an eclectic mix of music – blues, classical, old jazz, rock ‘n roll and folk, Billie Holiday and Bessie Smith”.
Dyslexic, she says she has “always had a strange relationship with words”. However she found a way to navigate around that and gained a first class degree in Film and Literature and an MA in Politics and Philosophy from Goldsmiths University. “I think I wanted to convince myself I wasn’t a stupid as I was told I was” she says.
Perhaps the greatest influence on her writing and musical journey though, was what she calls her “liberal upbringing”. Her father was a working class Londoner with a Physics degree and her mother a psychotherapist from Minnesota. She says, “I grew up in a house with a lot of political discussion. My parents weren’t what you’d call activists but there was plenty of discussion about everything from the Crusades to Perestroika. From an early age I was plugged in to the notion that there were other people in the world living very differently to me.” The turmoil of Sarah’s political journey shows through, not only in her writing – she has been published on palastinianthinktank.com – but also in her poetry and song lyrics. She has a deep sense of justice and uses her fascination with words to great effect in songs like Ahmed and Dangerous on her first CD Stalking Juliet and How the West was Won on In the Current Climate. She talks of the things that worry her both as a thinker and as an artist. “Certain people, due to a lottery of their birth, have an advantageous life and others don’t” she says. “I think what’s happened latterly, that both fascinates and disturbs me, is that all the rhetoric of the enlightenment is mobilised to abuse people. Ideas about freedom and democracy have become tools to morally intervene, and essentially to bomb people. I always think of the great battle cry of the French Revolution Liberté, Egalité, Fraternité, ou la Mort, Liberty, Equality, Fraternity, or Death. Now it’s more like ‘be free, be equal, be brothers … or we’ll kill you.’ The hypocrisy of that disturbs me greatly. There are legitimate tricky questions today such as how do we tolerate intolerance in a so called tolerant society. We are on the precipice of monumental change. There are all sorts of cataclysms going off.” She laughs at the irony as she suggests that we are in “an explosive age”. It’s an irony that is echoed in the title of her new CD In the Current Climate – alluding to what she calls “the so called war on terror”, the depression and the environment.
Her music is obviously influenced by the brilliant Gilad Atzmon, her producer and musical partner. His clarinet, saxes and accordion weave an extraordinary mix of Middle Eastern sounds, folk, jazz and even vaudeville into Sarah’s blues, beat poetry, rap, haunting lyrics and guitar. In the Current Climate may not have immediate hooks like How the Mighty Fall from Stalking Juliet, but it features a maturing musician and songwriter who deserves all the plaudits heaped on her by reviewers and critics. Emotional energy, stinging lyrics and stretching arrangements make for a pretty standard classification – unique.