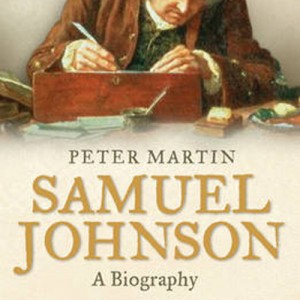 In July Peter will speak at the Beaminster Festival about Johnson’s enduring popularity in the year celebrating the 300th anniversary of Johnson’s birth.

Reading his book, one is immediately struck by what a gargantuan task writing a biography of Samuel Johnson must have been. A veritable cultural icon, Johnson, the son of a Lichfield bookseller, was born in 1709 and despite a difficult childhood – he was scarred from scrofula, suffered a loss of hearing and was blind in one eye – went on to become one of the most quoted literary figures of his time. As well as editing and writing for periodicals and compiling the first modern English dictionary, Samuel Johnson wrote poetry, sermons, prayers, essays, literary biographies, even a play and a novel. However his own writing was in many ways overshadowed by the second of the many biographies written about him; Scotsman William Boswell’s Life of Samuel Johnson, which included many detailed conversations between writer and subject and served to critically enhance Johnson’s reputation.

Having written books on both Boswell and Malone, Peter Martin felt he just had to close the circle by writing a biography about Johnson. He said “Having gone down that biographical line, I decided after Boswell that the next logical step was a biography of Johnson, which would for me be a personal fulfilment and a satisfying sequel. I had become even more fascinated by Johnson, this embodiment of Englishness who was larger than life in his own day, and has remained so since.”

Although larger than any book he had written before, there were other reasons for Peter to view the project with more than a little trepidation. “It was also daunting because Johnson is an English cultural icon who many people feel they own in a personal and emotional way” he said. “There are also Johnson scholars all over the world who I knew were going to read the book very carefully. I had to take into account most all the scholarship on Johnson in the last fifty years. In addition, I did a lot of work with primary sources in several libraries like the Bodleian, the British Library, the Beinecke Rare Book and Manuscript Library at Yale University, the John Rylands Library at Manchester University, Harvard University, and many others.”

His first task was to read almost everything Johnson had ever written – no mean feat in itself. Following that, he had to read the work of critics and historians. Although, due to severe personal interruptions, the project took nearly five years, the writing of the book took about eighteen months.

Having spent a lifetime steeped in Johnson’s world Peter Martin has been able to balance opinion from a wide range of sources. His biography is not only an engaging and very accessible portrait of a brilliant yet troubled man, it also manages to illuminate the humane character, exploring the melancholy that Johnson suffered. Peter said of Johnson, “He did have a very strong melancholic problem. From fairly early on he had a lot of physical problems and was always on the edge financially. He was always a very troubled man. His prayers, meditation and diaries all revealed that consistently.”

However throughout his research he was also struck by what he calls Johnson’s “rollicking sense of humour” and his physicality. He recalls how, amused at something about a coat that Oliver Goldsmith wore to an evening gathering, Johnson’s laughter could be heard ‘echoing through the London streets’ as he consumed every last morsel from the joke. As well as his humour his enjoyment of sporting pursuits struck the writer. “I recall a story” Peter said “of an occasion when Johnson was walking in a Devon Manor House and challenged some ladies to roll down the hill with him. He then challenged them to a running race, proudly proclaiming afterwards ‘I beat three of them, [so] what if they were women!’”

Johnson’s physical presence is evidenced in a statue of him by John Bacon that stands in St Paul’s Cathedral. Clad in a Roman style, his muscular frame holds a scroll and his strength is portrayed in a very idealised form. It depicts a classical colossus. It is said that Johnson was reading the classics when he was nine years old.

Although nowadays Johnson is rarely taught outside of university, Peter Martin hopes his new biography and future plans will help bring a new audience to his work and his life. He has just edited a new edition of Johnson’s essays that Harvard University Press is bringing out in September, which will make him available in an edition intended for the general reader. He said “I have always taught Johnson at university – I am a recently retired Professor of English – and loved him, but I have come away from this biography with a more profound understanding of the man and his use to the world today. I have always thought I would choose an edition of his complete essays to take with me to a deserted island if I had to choose one book apart from the Bible and Shakespeare. Johnson’s moral essays are powerful reflections on human nature, our weaknesses and strengths, and why we are the way we are. They are as current and ‘relevant’ today as they have ever been. And I repeat, ‘powerful’. Speaking of Shakespeare, his Preface to his edition of Shakespeare is as penetrating analysis of Shakespeare’s understanding of human nature as I have ever read.”

There is little doubt that Peter Martin has the greatest respect for Samuel Johnson. How Johnson would view the work of his biographers is another matter. On hearing that Boswell was working on his ‘life’ Johnson is said to have replied ‘If I really thought he was, I would take his!’ Peter thinks that, in general, apart from what he calls a discreet piece about the great man’s sex life, Johnson would have approved of his work. However Johnson may well have tired of the interest in his life. On one occasion he is said to have complained to Boswell, “Sir, you have but two subjects, yourself and me and I’m tired of both!”