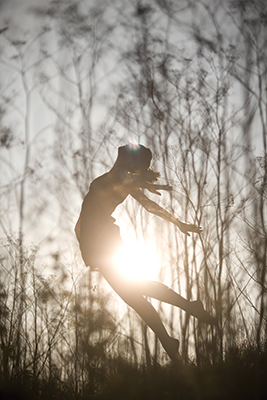 Nikki Northover’s adolescent dream became a reality and her annual dance shows have inspired many of her students to reach for the stars. Katherine Locke talks to her as she prepares her next show.

Nikki Northover is proudly sitting in her new dance studio explaining that it is a dream come true. ‘I was fourteen years old when I first had the dream of my own dance studio’, she says, ‘I even drew a picture of what it would look like’. Nearly thirty years later that adolescent dream has become a reality.

Nikki has been passionate about dance her whole life. She started dancing as a toddler, but before that even as a baby, she would watch her older sisters dance and her mother recalls that she was ‘transfixed’ by the movement. ‘I can’t remember a time I wasn’t dancing’, she says. By the time Nikki reached her teens she was dancing every day. She was going through the grades of ballet, modern and English tap, but it wasn’t until the Ballet Rambert came to Bridport and performed with local musician Sammy Hurden, that she realised how much more dance could be.

‘This was a new type of contemporary dance’, she says, ‘much freer than I was used to and I instantly fell in love with it’. Shortly after that Nikki had the opportunity to work with the late Roy Castle. ‘Everyone remembers him for playing the trumpet and presenting Record Breakers’, she says, ‘but he was foremost a dancer’. He was a hoofer (a professional touring dancer) and also a World Record Breaker himself for the most taps in a minute (1,440—in case you are wondering—that’s 24 taps a second). Set in 1973, it is a record that has never been beaten.

It was Roy Castle who introduced Nikki to American Tap. She explains that it is much less formal than the English variety as it grew up alongside the jazz movements of America. Improvisation is at the root of both disciplines and it was a concept that excited Nikki. She went on to study Dance and Drama at Roehampton, followed by a Post Graduate Certificate in Dance and Education in Surrey.

Nikki is totally committed to the idea of creativity in education. She says, ‘there is nothing better for building confidence and the realisation that hard work and discipline bring their own rewards’. She is saddened by the arts being marginalised in mainstream education and feels they should be embraced rather than marginalised in schools.

In response to her beliefs, Nikki founded Bridport Youth Dance in 2001. ‘I was also working in London at the time, she says ‘I was at the West London School of Dance for sixteen years and coming back and forth from London to Dorset’. She describes an epiphany she experienced whilst sitting on the train. ‘I realised I had to put down roots in one place or the other’, she says, ‘and I chose Dorset’.

She is very honoured by the fact that many of her former students, both from London and Dorset, have gone on to be professional dancers. ‘There are former students in the cast in several West End Shows, including The Lion King, Wicked and Mary Poppins’, she says. ‘It is so rewarding to see young people throughout their whole dance journey, from tentative first steps through to making a career’.

Bridport Youth Dance has proved to be such an important resource for young people locally. The company put on a professional show every year and it always draws big audiences. Nikki believes that it is important for young people to have exposure to top dancers and choreographers, so facilitates opportunities to do so by bringing guest teachers to Bridport. ‘These are professionals that might not come to Bridport otherwise’, she says.

‘We are so fortunate now to have this dedicated dance space at Crepe Farm Business Park to hold classes and host guests’, she says. ‘It has a proper sprung floor, mirrors and a changing room. It is the ideal space’. Nikki saw the advert in the Marshwood Vale Magazine and made a tentative phone call. After that ‘It all came together so easily—as if it was meant to be’.

The space has been funded through a variety of sources ‘The Symondsbury Estate have been very generous’ says Nikki. She also was able to raise money through a Crowd Funding Campaign and put in some of her own capital. ‘Many people have contributed to making this space possible and I truly want it to be a community resource’, she says.

The studio is currently hosting fifteen dance classes per week and Nikki is particularly delighted about the boys dance group (run by Aimee Symes). ‘We have seventeen boys in the class’, she says, ‘and there is now a waiting list to join. It wasn’t that long ago that there would be one boy in a class of twenty girls, so we are thrilled that boys are coming to dance so enthusiastically’. She describes the group as ‘high energy and risk taking’ and hopes that it will continue to grow.

The boys will, of course, be performing in this year’s show Fire Under My Feet at the Bridport Electric Palace on March 4th and 5th. ‘There are around ninety young people involved in the show’, she says ‘and we rehearse from September through to March’. The show includes a variety of dance styles, from contemporary to tap and is made in collaboration with local musicians. It showcases the work of the students and gives them a valuable opportunity to perform in front of an audience.

Nikki is fervent in her desire to offer dance to young people. She plans to expand the programme in the future and describes the space as ‘the manifestation of the work and goodwill of all those who have supported Bridport Youth Dance’. Nikki runs all this whilst being a busy mother of three young children. Her daughter Izzy is showing musical talent and Nikki says she hopes that she will take over the studio one day. As she is only seven, there is quite a long way to go, but it looks as though we may be seeing dance at the core of Bridport life for young people for a long time yet. Aren’t we lucky?