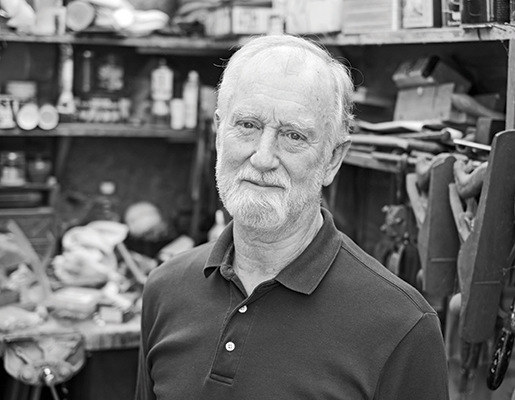 ‘I was born in 1938 near Oswestry, Shropshire where I spent my early life until my lovely mother and father, Dilys and Robyn, moved the whole family to mid Wales, in 1947. I have one elder sister, Jane, and two younger brothers, Robert and Peter. Father was an Estate manager, Surveyor and Valuer. The origin of our surname is when, in 1846, Agnes Forrester married John Addie at Stirling, Scotland.

At the age of nine I was sent to Preparatory School in Scotland. Put on a train at Crewe station with a trunk and a label attached to my collar, I was off to Edinburgh. With the aid of a porter I travelled across Edinburgh to Dunfermline where I telephoned the school for them to fetch me! I went on from there, at the age of 13, to Shrewsbury School which was one of the top ‘classics’ schools in the country. Classics and I didn’t get on so well but I have to admit Latin, Greek and so on gives you a marvellous base on how to learn and research. I was always very poor academically. Father expected us boys to follow into his firm; I was to be the architect, Robert the surveyor and Peter the valuer. So, I went on to University to study architecture; I didn’t complete the course because I had a major motorcycle accident but managed to complete some exams. I left and went into an apprenticeship in Precision Engineering in Shrewsbury. Unfortunately, two years later, I came off a horse but still had my foot in the stirrup when the horse galloped off the other way. I returned home and after convalescence I joined the Town and Country Planning Dept. as an Articled Pupil. Earlier and whilst studying this profession, I had been making my own car. Frank Costin happened to spot it and said ‘wow’. He asked me to come and see what he was working on, which was a design for a new car, the Marcos. Frank Costin had been the head of design, stress and aerodynamics for De Havillands. He offered me a job which I couldn’t resist! We were involved in all sorts of exciting work in specialist aerodynamic, hydrodynamics and stressing—this is where my design skills came in. We even designed and hand-made a modified front suspension for the famous Stirling Moss 1959 Le Mans car. Unfortunately, Costin wasn’t a great business manager and after a few years we were working three or four nights a week living on whisky and sandwiches—he was overworking us and in the end we left. I went back to Town and Country Planning in Merioneth County Offices then Shropshire and Lincolnshire, where I ended up as Landscape Architect for the County. Later I moved to Powys County in Mid Wales and worked for the next 20 years as Conservation Officer, for a quarter of Wales, working on historic building, wildlife and landscape conservation—I felt I was extremely lucky to have the very best job in Local Authority.

I met my first wife in Llanberis, North Wales in 1965. She was a teacher and we have two lovely boys, Heath and David, but the marriage fell apart in the early 70s. In 1976 whilst working in Powys I met Pam who similarly worked for Powys County. We married in 1978 and have been happily married ever since. My elder son qualified in art and design and now runs his own tattoo studio called Something Wicked in Lincoln. He’s a brilliant artist and people come from all over the country to him. He married and has a daughter. The younger son, David, is now a Major with the Royal Artillery, currently based near Salisbury and is a specialist in avionics, working with unmanned reconnaissance drones. Although he started his career in REME, his skills were soon spotted and the Royal Artillery grabbed him. He’s married, 6’6”and has played rugby, for the army, against the All Blacks. He has three children; a girl and two boys.

I retired at the age of 55 because of serious arthritis. The consultant reckoned I’d be dead within a few years on the number of pain killers I was taking just to get to work, which was very unfortunate as I loved my job. So, in 1995, when Pam retired as well, we moved from LLandindrod Wells in Wales to Colyton, Devon.

In my marriages, I have had five homes and at all of them I have undertaken major alterations; carrying out all the work myself. My simple determination to make things was instilled in me by my father who taught us that there’s no such word as can’t! From my earliest years, when I designed and made things like model aeroplanes, valve radios and even a 35mm camera, I have continued to make and create. We were on holiday recently, in Lanzarote, when I watched a chap playing a harp. I asked him about it in broken Spanish and researched it when I got home. It coincided with me having a hip replacement; so when I was hobbling around I designed it. After a few weeks I was able to get some bits of wood together and made one. When that was finished I restored an 1891 Italian mandolin that was falling apart.

Other hobbies include drawing and painting in acrylic and watercolour. I like to do cross stitch and I’ve built a 28ft deep-water yacht. In the last few years I was given three derelict dinghies by the local yacht club. I made a simple cover in which to strip them totally, completely rebuilding them and then not doing too badly with them on eBay!

I also love doing work and research for the community in various ways. My keenest interest is in the Colyton Parish History Society. In the 16th century Henry Courtenay was Lord of the Manor of Colyton; he became too outspoken in the Royal household so, lost his lands and head. Henry VIII then became Lord of the Manor. A deputation of men from Colyton went up to London and bought the land back off him. Under a Royal Charter the Chamber of Feoffees was formed which charged them to receive all income from the properties which was then to be spent for ‘good and godly purposes’ in the community. Since that time they have influenced this whole community continuously, which is very important in national terms. The History Society’s exhibition spaces and offices are now in what we are calling the Merchants House, which is the Heritage Centre in Colyton.  I have just made an entire costume of a rich, mediaeval Merchant, for the Centre. We’ve just had approval of £59,000 Heritage Lottery Fund Grant which will go towards upgrading the whole exhibition space as well as digitising 450 years’ worth of the Colyton Chamber of Feoffees papers. The Chamber has managed to keep all meetings records and account books since 1545; it is an extraordinarily rich social commentary and is unique in the whole country.

I’ve done a lot of work on historic buildings and have written a book on Colyton Church after four years of research, to ensure its accuracy. It has just been published but due to limited funding only six have been printed. I have also designed sundry things like the town map, the parish map and the millennium cast bronze, attached to the Town Hall, which illustrates 2000 years of history of Colyton.  I did the Parish Map and, with the local primary school, the town guide map. I walked around with them, noted the interesting things, they wrote it up and helped produce it. I have also partly produced and collated a local history booklet, ‘Colyton through the Centuries’ which is on its third print now.

I continue to make things. I do at least a couple of codeword puzzles each day; I need to keep the grey cells alive and I like being occupied. My creative hobbies are extremely important to me alongside the community, home and married life.’