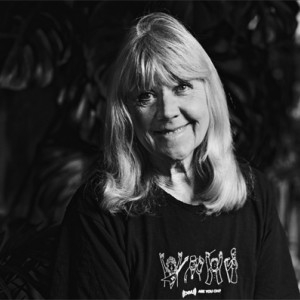 Robin Mills went to Corscombe, West Dorset to meet Eva Harvey. This is her story.

“My memories of wartime Weymouth are quite vivid, where I lived as a child. We were on Wyke Road, and I can remember bombed houses, and American soldiers giving my sister and me chewing gum. My mother worked on the buses, she was a clippie, and I didn’t really know my father, who was in the army. By the time I was 4, I’d had all the diseases around at the time; scarlet fever, pneumonia, diphtheria. I can remember being in hospital, in a cot, looking through the bars waiting for the bedtime sweetie to come round. My mother later married a bus driver, my stepfather, who was a really nice man. They had three boys together, so I’ve got three half-brothers.

Mum’s family came from Wareham, where they had a greengrocer and florist’s shop next to the Black Bear, and one of the joys of my young life was going to stay there. I’d help with wiring the flowers to make the wreaths, and go into the woods to collect moss. We were treated like grown-ups, never being told when to go to bed, always having fun; they’d take us cycling to Arne or Corfe Castle. My parents moved around a lot, always trying to better their lot, which meant I went to seven different junior schools. Then I passed a scholarship and got into Bishop Fox’s school in Taunton as a boarder. I was always a bit short of things I needed, like socks, my parents being rather hard up, but I did enjoy my two years there, and I think it did me quite a lot of good. Then my parents moved to Yeovil, and I went to Yeovil High School where I did my GCE’s. I would have loved to do A levels and go to University, but we were a big family and money was short; we all had to work. Looking back, I wouldn’t change any of my life, but at the time I was quite disappointed. The head teacher at my school actually offered to pay my Mum £1 a week to allow me to stay on, but it wasn’t to be. Then someone at my Youth Club mentioned a job going in the Borough Surveyor’s drawing office. So I just went along, and was offered the job, simple as that. I was tracing plans, and doing lots of lettering, which was all done by hand of course in those days. Women had to wear skirts and nylons to work then, even when we were out on site; when the fashion for thick tights came in, I leapt into those – no more chilblains in winter.

I’m constantly aware of how wonderful a time it was to be growing up. The music, which was so central to our lives, seemed to happen so suddenly, with Elvis, and rock and roll, and I’m still a huge fan; I’ve got all Bob Dylan’s music, even recordings of all his Theme Time radio shows. Fashion designers like Mary Quant, and Foale and Tuffin, were so important to our culture, the culture of young people. You could only buy white tee-shirts then, and I was so excited to get my first tee-shirt with a design on it, the first Rolling Stones one, but that wasn’t until 1966. When Ray and I started going out, he was an apprentice at Westlands. We’d all meet up at the Cadena Café in Yeovil, but one of our friends had a flat in West Bay, on Pier Terrace. He had the most wonderful collection of jazz records, and soon it became the obsession for all of us – to get to West Bay for the weekend. If I couldn’t get a lift there, I’d catch the train down. My mother was disapproving, I think she thought I was going out with all these chaps, but it was just a lovely crowd of people. West Bay was a working port then, there were cargo boats, from Germany, and Norway, and we’d go to parties on board. We had a skiffle group, and we played at the George, the Bridport Arms, and the New Inn at Eype. I didn’t play, but always went along for the ride, and we’d get invited to play at parties. We would spend all day on the beach; thunderstorms were great, everybody wanted to swim in a thunderstorm. I remember one weekend when there were about 30 people sleeping in that tiny flat; on the stairs, under the table, it was crazy. One of those people was Stu, Ian Stewart the pianist, who became a great friend; he was known as the 6th Rolling Stone. Word was beginning to spread, through people like him, of the West Dorset music scene, so we got to know more and more musicians.

Ray and I got married on Boxing Day 1959, at Corscombe Church – and we’ve just celebrated our 50th wedding anniversary. Mother was living in Corscombe at that time, and she knew of a rather dilapidated cottage with four rooms. Being next to the Fox Inn, of course Ray saw the potential. It had been quite a big house but there’d been a fire, and then someone had turned it into a bungalow, so it really wasn’t very inviting. Anyway, it came with an acre and a little stream ran through it, and that gave us lots of scope to turn it into something nice. Then we managed to buy the adjoining four acre field with an old stone farm building, and that really made the place; we eventually converted the building into a house for our son Saul and his family.

I worked in the Borough Surveyors for 5 years, and then a job came up in the planning department. It was amazing the responsibility they gave me in those days. They sent me to Wincanton to plan a bypass route: I walked across fields making notes and sketches, on my own, and there it now is, the Wincanton bypass. It was me who decided where it went! I worked there for 5 years, until Saul was born in 1966. I enjoyed it all, and the fact that I left school early wasn’t bad for me at all because I was determined to keep learning all the time, and went to evening classes, doing geology, archaeology, French, Tai Chi, pottery. I’m still like that, I listen to Radio 4 and read a lot, and every day I hope to learn something new.

Originally we got into the stone business through a friend who was extracting ham stone from Ham Hill, but needed somewhere to saw it up. We got permission to install the equipment here, and over 20 years or so the business grew; we got our own quarry on Ham Hill in 1982, which had been unused for 100 years. It’s such a beautiful place, the biggest Iron Age hill fort in Britain. We were quarrying, sawing and selling ham stone, and then got into building houses. I didn’t start the lettering until about 1984, although I still feel like a beginner. It was a natural progression from the work in drawing offices, but I still use my guide for the proportions of the letters from my school art classes in Yeovil. Ray and I were so busy we sometimes even took separate holidays, but were still very involved with music. The house was always full of musicians at weekends; Stu and his friends, like Alexis Korner and Charlie Watts, would play at Eype and other places, and in the early ‘80s it took off, with bands like Diz and the Doormen, Juice on the Loose, the Balham Alligators, Rocket 88, and Blues’n Trouble, at venues like Evershot Village Hall, West Mead at Bridport, and the Bell Inn at Ash. We were putting the musicians up here and feeding them, so being surrounded by musicians, music, and instruments obviously had a big influence on daughter Polly. She was writing songs right from her early teens, and it fills me with pride to think what she and Saul have achieved in their lives.

It was always our ambition to have our own place on Pier Terrace in West Bay, and 15 years ago we managed to buy a flat there. So we still have our weekends away, and one day we’ll manage to spend 2 nights there instead of just one, when we’re not so busy. But then I’ve always been busy at what I love; rock, and stone, that’s me.”