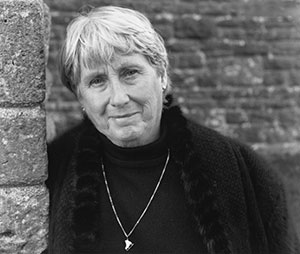 ‘This is the first time I’ve lived outside London in my life. It was always my husband’s dream to retire to Dorset, where he spent many happy holidays as a child. People are so friendly and there’s so much to do; I love it here now.

I was born in Kensington and went to Burlington School near Hammersmith. I really enjoyed it, mainly because of the sport, but I knew my mother wouldn’t let me leave until I’d passed my school certificate! My aunt and uncle took me to Queen’s Ice Club when I was ten and after that all I wanted to be was an Olympic skater. I used to rush through my homework so that I could go and skate. My mother even allowed me to go during the war because it was underground and had sandbags all around, so they thought it was quite safe.

When I left school I had to get a job because my parents didn’t have enough money to pay for me to skate full-time. I worked as a librarian in Hammersmith Children’s Library. The flexible hours enabled me to skate when I was free. I had a wonderful coach, Gladys Hogg, and when I was 20, I achieved my ambition when my skating partner, Ray Lockwood, and I were selected for the British team at the 1952 Olympics in Oslo. Up until then the Isle of Wight was abroad to me; can you imagine what it was like to go from wartime Britain to train at the Kulm Hotel in St Moritz? Chocolate and loads of food!

Vienna was still very war-torn when we arrived for the European Championships and armed soldiers had to take us to the ice rink. From there we went on to the Olympics where Jeanette Altwegg won the gold medal. Our uniforms were very austere, but we bought some little caps and boots in Vienna to go with our ARP trousers and some red jackets Lilywhites had managed to find. We felt so proud when we marched through the middle of Oslo and everyone clapped. George VI died while we were there so we had to find black dresses or armbands for the memorial service.

When I met my first husband, I decided it was time to earn some money at skating, so after competing in the Olympics and the World and European Championships, and with two gold medals from the National Skating Association, I decided to turn professional.  I coached Hilary Green and Glyn Watts to become British champions and Olympic skaters.  I also coached the British Junior champions and, with Courtney Jones, invented the Starlight Waltz and Silver Samba for Torvill and Dean. Basil Cudlip Green and I won the British Professional championships, and John Curry and Robin Cousins became dear friends.

Skating has been my whole life – I was still skating at 68! – I just loved it and all the fun we had. Princess Di came in one day with the boys and joined in with the public skating; they had a great time. Sir Francis Chichester, the famous single-handed yachtsman, used to come and was terrified! He was a really charming man and I wondered how he could possibly be terrified after all he had achieved.

Everything has changed since I started. It’s big business now and all geared to television. I’ve got a piece of material from the dress my aunt had to rake around to make for me, and I can still see John Curry helping to sew sequins on Hilary’s dress!  Now they all have choreographers, physios, aerobics teachers and make-up artists and their costumes cost about a thousand pounds. Skating isn’t any less skilled – I couldn’t hold a candle to them now – but I think it’s less enjoyable.

Nowadays children don’t have the opportunities for sport in school that we had.  If I have a remaining ambition, it is to see more ice rinks throughout the country; it’s an all-embracing thing for the whole family and it would keep them fit and off the streets. I really missed children when we came down here, so now I help them with reading in school, which I love.  I shall be 74 in April and I’m hoping to go back to playing golf soon, as I really must keep fit.’