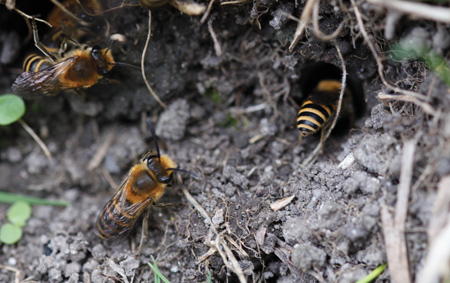 Here’s an interesting zoological term: charismatic megafauna. It’s used, sometimes slightly disparagingly, to denote the big beasts which have instant and widespread popular appeal, from lions and tigers to sperm whales and giant pandas; and the criticism inherent in the idea is that the big creatures tend to gobble up all the public attention, at the expense of lesser species which can be just as interesting, worthwhile or important.
I agree with that. I am a firm believer in charismatic minifauna too, and a perfect example came my way on a recent autumn morning of soft sunshine and still air, when my wife called me into the garden to cast an eye over what looked from a distance to be a swarm of wasps. Closer inspection showed they were not wasps; they were small bees, and perhaps 100 of them were flying up and down close to one of the edges of the lawn.
Such bees are not always easy to identify. Everybody knows bumblebees, of which we have 25 species, and honey bees, of which we have just the one; but hardly anyone other than specialists is aware of the other British bees, which do not live together in colonies but make solitary nests on their own.
This is not least because there are about 250 species of them: there are miner bees and mason bees, nomad bees and cuckoo bees, flower bees and plasterer bees and many many more. However, until relatively recently there was no comprehensive guidebook you could consult to work out which was which—the last one was The Hymenoptera Aculeata of the British Islands, written by Edward Saunders as long ago as 1896—and the vast majority had only scientific names, in Latin. So they remained under the radar for most people and have sometimes been referred to as the lost bees, or the forgotten bees.
Things changed in 2015 with the publication of Field Guide to the Bees of Great Britain and Ireland by the entomologist Steven Falk. This wonderful 400-page handbook has details of all our 275 bee species, with photographs of every one and paintings by the leading wildlife artist Richard Lewington, and not least, English names, more than 200 of which Steven Falk made up himself—you’ll find the little sickle-jawed blood bee in there, alongside the woodcarving leafcutter bee—and it was with its help, and the help of my naturalist friend Peter Marren, that we worked out that the small creatures buzzing about in the garden were ivy bees, Colletes hederae.
The ivy bee is fascinating not least because it has been recognised as a separate species only since 1993, and only known in Britain since 2001, having first been identified in Dorset. It is our only true autumn bee, the last solitary bee to emerge each year, and it does indeed feed on ivy flowers; it lays its eggs in holes tunnelled into the soil which it lines with ivy pollen and nectar for the larvae to consume when they hatch the following year.
It is a very attractive, not to say charismatic, piece of minifauna. But what were the bees doing when we spotted them? Some of them seemed to be digging their tunnels into the small cliff-like side of the lawn but many others were flying around, if not quite excitedly, then certainly with serious intent, and if you looked closely you would see that one would often grab another. Peter took the view that this was a mating swarm—a gathering where the males competed among themselves to mate with as many females as possible. A sort of party, in human terms.
I found it charming; I think some of the bees’ enthusiasm rubbed off on me, a tiny drop of the party spirit, you might say. But more satisfying still was to know precisely what they were, something which until a few years ago would have been difficult if not impossible. When we came to the village last year I saw at once what everybody sees, how beautiful it was, how lovely the river and how stunning the church, but I also quickly noticed how comparatively rich in insect life it was too: small tortoiseshell butterflies and hummingbird hawkmoths fed on the red valerian flowers in our garden, and occasionally from the river mayflies drifted in. And now, I say to myself, we have ivy bees.
It might not be quite up there with having swallows in your garden. But it’s pretty good.