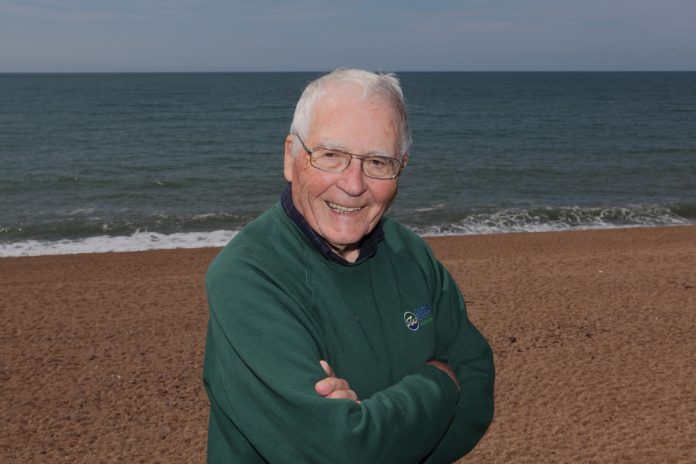 On a warm July day in 2015 I drove the mile or so from Abbotsbury beach car park along the single-track road that led to the coastguard cottage home of James Lovelock, who died recently on his 103rd birthday. I was meeting him to interview and photograph him for a Marshwood Vale cover story. Stopping in a passing place to admire the view, I tried to collect my slightly nervous thoughts ahead of meeting the 95-year-old world famous scientist. The view was simple but stunning—beach, sea, and sky in perfect horizontal proportion.
I was of course welcomed warmly by James and his wife Sandy, and I immediately noticed Jim’s South West Coast Path sweatshirt. I was within 60 or so miles of completing the 630 mile path myself, and being some 30 years his junior was staggered to hear that he and Sandy had themselves completed it a few years previously. I knew only too well the physical challenges of walking the path, and with no hesitation Jim told me it was the achievement of his life of which he was most proud.
Jim’s obsession with science began early. As a boy he was driven to find out how things worked, and why. His parents allowed him to spend unaccompanied time in the Science Museum aged 6, where his early curiosity developed. His extraordinary scientific skills seem to a large extent to have been acquired through practical experience; he was once accused of cheating in an exam because, as he said, by then he could almost do gravimetric analysis in his sleep. And starting work for the Medical Research Council during WW2 he found himself experimenting not with medical research but with outlandish defence ideas such as igniting huge amounts of fuel oil floating on the sea off Studland. He found that a wooden boat could be pulled through the flames unscathed, so saving the nation a lot of fuel.
It was Jim’s invention of instruments like the Electron Capture Detector which led NASA to offer him a job as an experimenter on their Mars and Lunar expedition programmes. His ability to prove that gases like oxygen and methane didn’t exist on Mars meant that there could be no life there. But that also made him realise that because those gases, which, although they react together and disappear in sunlight, in fact are plentiful on Earth, they must not only be generated in vast quantities by life on Earth, but are also maintained in equilibrium by that life, at a level which supports it. His theory, developed in collaboration with Lynn Margulis and Dian Hitchcock, and named “Gaia” at the suggestion of his friend William Golding, made his eventual reputation, but the scientific community of the day was sceptical, particularly when the theory was given spiritual significance by New Age followers.
Jim’s views on climate change, what humanity could do to offset it, and what the prognosis for the planet might be, were sought by all and sundry. He cared passionately about how the disturbance to the equilibrium of the biosphere by humanity’s efforts were driving climate change. As a result, he devoted his later life to raising awareness of it, publishing his later books on the subject. His views were not universally accepted, such as his support for nuclear power. He told me that if only we could find a way to harness it, the energy of the sun’s rays in the Sahara Desert alone were more than sufficient for the entire world’s energy needs, and that he had calculated that predicted sea level rise in his lifetime meant that at least his coastguard cottage by the sea at Abbotsbury should stay dry.
Jim should be honoured and remembered for many things, including detecting the atmospheric traces of chlorofluorocarbons which were damaging the ozone level, and through detection of minute quantities of pesticides in the environment he gave Rachel Carson the evidence she needed to write Silent Spring. Perhaps it was his ability to connect evidence from a variety of scientific fields into a hypothesis of global significance that made him a visionary figure. Maybe a friend of mine was right when he said he was a “sage/scientist, who bowed out just as it became obvious he was right all along”. If our meeting was but brief, it was for me an unforgettable privilege.