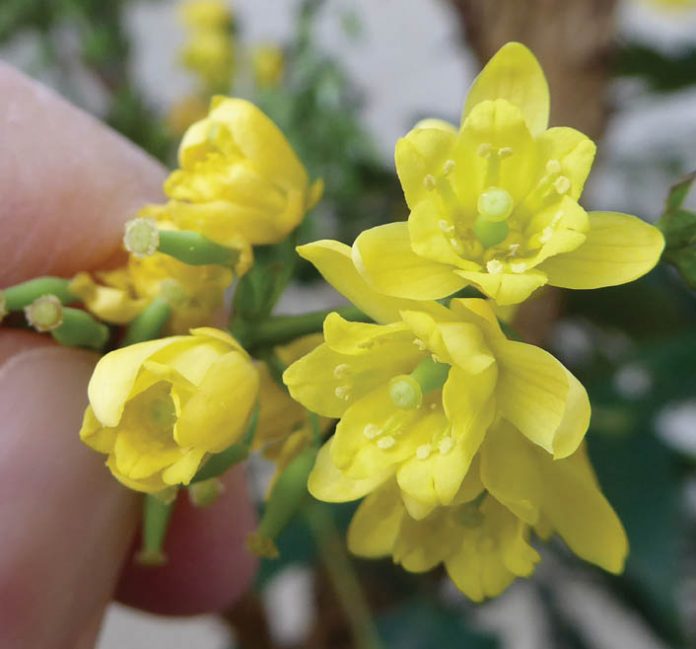 If, like me, you enjoy looking at flowers, then winter can be a pretty dismal time. The plants that give colour to the autumn such as asters and sedums have long since faded and there’s a gap of several weeks before the winter flowers, snowdrops, aconites and pulmonaria show their faces. It hasn’t helped this winter that the December weather, although very mild, brought many overcast days. Ceilings of thick grey cloud hung overhead, keeping light levels low and draining the landscape of colour so that I yearned for some brightness.
But there is help at hand in the form of winter flowering shrubs and plants which bring welcome colour to the gloom. These include winter honeysuckle and winter flowering heathers but my favourite is mahonia with its starbursts of lemon-yellow flowers and its spiky evergreen leaves. Mahonia works hard, flowering from November with some varieties continuing to bloom well into the New Year. A large stand of the shrub is a fine sight in winter, sometimes as much as three metres in height, covered with multiple plumes of flowers reaching upwards above sprays of spiky mid green holly-like leaves. Even on the darkest winter day, the yellow flowers light up their surroundings like banks of fluorescent tubes and should the sun shine, both flowers and leaves glow in reply. As an added bonus, stands of mahonia are often enveloped in a cloud of sweet fragrance said to resemble lily of the valley, a rare experience in these low months. If all that wasn’t enough, as the flowers mature, they produce attractive blue-black berries dusted with a white bloom.
Mahonia was first discovered during the Lewis and Clark expedition sent to explore the newly acquired north western territory of the United States during the early years of the 19th century. The shrub was found growing extensively between the Rockies and the Pacific Ocean. The prominent Irish/American nurseryman Bernard McMahon based in Philadelphia was responsible for propagating the seeds and plants brought back from the expedition and mahonia was named in recognition of his work. Mahonia is also referred to as Oregon grape after the resemblance of its berries to the vine fruit and the part of the US where the shrub was first seen.
The native US shrub was imported into the UK in the 19th century and different varieties were also found in Asia at about the same time. These and their hybrids are now very popular in this country contributing architectural interest to gardens as well as winter colour. They are often planted around the edges of car parks and outside buildings where their potential size can be readily accommodated.
It’s not just humans, though, who take pleasure from mahonia in winter. Both insects and birds relish the profusion of flowers and berries on the shrub. The long arching racemes thrown upwards by mahonia are densely packed with small flowers, each shaped like an upturned bell and formed from concentric rings of petals and sepals. The flowers are rich sources of pollen and nectar providing important forage for insects on mild winter days and, as the insects feed, they contribute to pollination. Among the insects visiting mahonia in winter, bumblebees are regular foragers in the south of the UK and I have seen both workers and queens even in late December, sometimes liberally dusted with yellow pollen. Honeybees and hoverflies will also venture out to feed on milder winter days and they may occasionally be joined by red admiral butterflies. It’s fascinating to watch bumblebees working the flowers, moving systematically along a raceme, dislodging yellow petals which fall to decorate nearby leaves and create a yellow “snow” on pavements below. Birds such as blackcaps and blue tits also take sugar-rich nectar from mahonia flowers. When they visit, they may pick up pollen on their beaks contributing to pollination.
The flowers have a special mechanism for increasing the efficiency of pollination by visiting insects and birds. In each flower, the pollen-loaded stamens are arranged in a ring just inside the petals. Stimulating the flower, as would happen if a pollinator visits, causes the stamens to move inwards increasing the likelihood that the pollinator will pick up pollen to transfer to the next flower. Pollination leads to formation of the berries, each about the size of a blackcurrant which start green and mature to blue-black with a white bloom. The berries provide winter food for birds later in the season and blackcaps, blackbirds and song thrushes may be seen feeding.
Although mahonia was a new discovery for colonists in the US in the early 19th century, the native American tribes of the north west were already familiar with its properties. Some ate the berries, either raw or cooked and some used preparations of the shrub for medicinal purposes. Yellow dyes derived from the plant were also used by the tribes for colouring fabrics and basketry. Preparations of mahonia have been employed in traditional Chinese medicine over many years and are used by some contemporary herbalists but rigorous scientific studies of their effects have not been performed.
It is interesting to reflect on how mahonia, a shrub native to parts of the US and Asia, has successfully travelled to the UK where not only does it brighten our winters but it also supports wildlife across this low season.