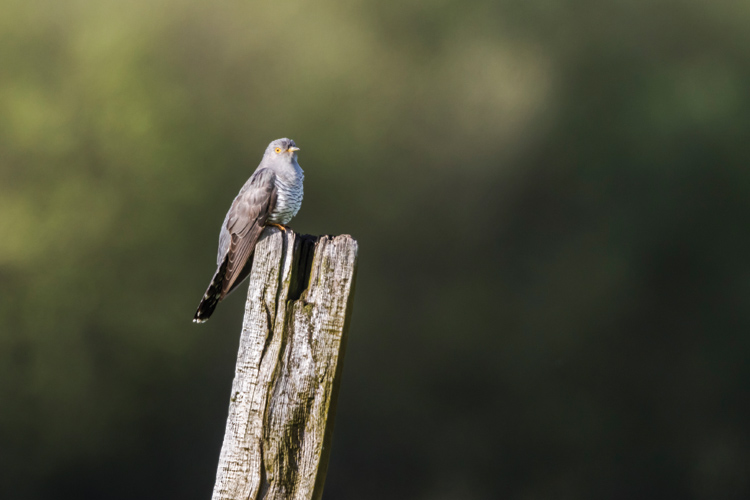 When the Lockdown travel restrictions were eased just over a month ago, we took the opportunity to venture further afield for our exercise walks. So, towards the end of May, we drove up to Two Bridges, high on Dartmoor, for a circular walk around the valley of the west Dart river via Wistman’s Wood, a rare example of ancient high-altitude oak wood. Our walk was graced by the sound of many cuckoos.
We began by heading northwards away from the Two Bridges car park on an uneven track running roughly parallel to the west Dart river. With clear skies, strong sun and barely any breeze, it was much hotter than we expected for Dartmoor, with sultry probably the best word to describe the weather. Soon after we set off, however, as we walked up the dry stony path to Crockern Tor Farm, we heard the unmistakable call “cuckoo cuckoo”. A few sheep and one or two walkers were our only company and the song of the cuckoo instantly grabbed our attention as it echoed round the valley. Further on, a jumble of rocks, Crockern Tor, loomed on our right and then another cuckoo called. Eventually, we reached the top of a ridge and Wistman’s Wood came into view ahead, a green-leaved mass standing out above the summer-dry landscape on the eastern flank of the valley while the west Dart river lay in the valley bottom below. The dry grass around us was punctuated by neat yellow tormentil flowers and unruly clumps of heath bedstraw covered with tiny white flowers and, as we walked, small orange butterflies (Small Heath, Coenonympha pamphilus) flickered upwards, dancing around briefly before heading off. Another cuckoo called and I began to understand how the simple but beautiful music of their song had inspired so many composers.

We made our way along the edge of Wistman’s Wood looking in on the seductive jumble of moss and lichen-covered twisted branches and smooth rocks. By now we had been walking for about an hour and were finding the temperature difficult so we decided to take a lunch break seated on smooth lumps of granite beneath one of the old oaks. A little cloud had helpfully bubbled up keeping the sun at bay. The river valley lay below us and the dense oaks of Wistman’s Wood and a few smaller clumps of trees stood out on the hillside nearby. Sheep bleated fitfully and small birds flitted about. Then the cuckoos started to sing as if to provide us with lunchtime entertainment. Several birds called from different directions, some nearer, some further away and at least two cuckoos moved between the trees in the valley. We recognised them in flight from their pointed wings and long tail. Most of the song was “cuckoo cuckoo”, the call of the male bird and sometimes this was extended to “cuckcuckoo”, not far off the opening of Beethoven’s Fifth. We also heard the burbling, gurgling sound which the female cuckoo makes when she is excited.

The cuckoos had put on a real show for us that day but whenever I hear their call, whether it be one cuckoo or several, the sound has a profound effect on me. In my teens, living in small town Hampshire, near woodland, cuckoo calls were a standard fixture of spring, something I came to expect each year. With the decline of the bird, and having lived in large towns for many years I lost that expectation. Now when we come to Dartmoor and I hear cuckoos again, their song touches some deeply held memory for me.

After lunch, we headed down across open moorland to cross the west Dart river. Cotton grass with its fluffy, white cotton wool heads grew here, showing that the land is normally very boggy. I also saw a few delicate blue and white heath milkwort flowers, far fewer today than in previous years, perhaps a reflection of the dry weather. We crossed the river and scrambled up to the Devonport Leat, a narrow watercourse constructed in the 18th century to supply water from the Dart river to the growing community of Plymouth Dock 27 miles away. Nowadays it empties into the Burrator Reservoir which provides water for Plymouth itself. We followed the leatside path along the western side of the valley across the river from Wistman’s Wood to return to Two Bridges. This should, by definition, be mostly easy walking but degradation of the path stones makes it less so. Marsh violet with its pale mauve flowers, pink lousewort and good amounts of bilberry flourish in the damp environment by the leat and a few small fish dart back and forth.

About half way along the leatside path, two male cuckoos began to sing from the trees across the river in Wistman’s Wood. At first, their calls came at different times from different locations. One bird sang “cuckoo” and a short time later the other bird did likewise as if providing an answer. This call and answer pattern was then repeated. But the two birds were actually “cuckooing” at different frequencies so that gradually their calls moved together, then began to overlap and for a short time they sang at the same time before one bird stopped. For a brief moment, as we listened, time stood still.
The song of the two cuckoos initially made me think of a musical round where different groups of people sing the same melody but start at different times. “Sumer is icumen in”, also known as the Cuckoo Song, is a good example of a round. A better analogy for the calls of the two cuckoos, however, comes from the phase music of Steve Reich. In his composition, Piano Phase, two pianos play the same tune but at slightly different tempi, giving rise to novel musical effects, rather like the two singing cuckoos.

The cuckoo has suffered a severe decline across the UK in recent years with about three quarters of the population disappearing since the 1980s, probably a result of agricultural intensification. The pattern of the decline is, however, not uniform. In Devon, for example, cuckoos were found all over the county in the 1980s, whereas now they are largely confined to Dartmoor and Exmoor where they seem to be doing well. So, we weren’t surprised to hear cuckoos when we visited Dartmoor that day, but what did surprise us was the beauty and the musicality of the cuckoo chorus.

For more information about cuckoos, visit https://www.rspb.org.uk/birds-and-wildlife/wildlife-guides/bird-a-z/cuckoo/
To hear the call of a cuckoo recorded near Wistman’s Wood, visit my Youtube channel: https://www.youtube.com/watch?v=cVbm6yYdYJk