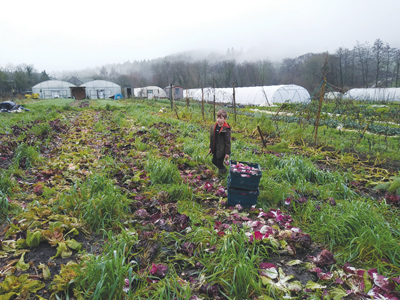 May can be one of the best months as a vegetable grower, but it can also be pretty stressful and frustrating depending on the weather. We have had a pretty good spring so far—with the dry weather in April that allowed us to get a lot of the early plantings in the ground and also to prepare the ground of our new field which we will be planting mainly autumn crops in.
It is the time of year when we are starting to harvest the earliest of this year’s crops, and some of the overwintered crops like sugarsnap peas and spring onions too. We also still have plenty of planting to be done—with the more tender outdoor crops such as courgettes and squash, and also all of the summer polytunnel crops like tomatoes, peppers, cucumbers and beans. The cucumbers and beans usually get planted in April for us, and then the peppers and tomatoes we like to get in by the first week in May ideally.
We have in the past tried to keep most crops pretty weed free, and although this can be beneficial, especially during the crops’ early stages, it can also mean that there are fewer plants photosynthesising. In a healthy system, and in much of nature we see soil covered, with many plants photosynthesising and releasing carbohydrates and compounds through their roots (called exudates), which nourish the microbial life in the soil. In turn, this microbial life thrives, and when the microbes die or are eaten by predators they then get broken down into plant available nutrients, which a plant can then take up through its root system. So, in essence, the more plants there are covering the soil, the healthier the soil life and the more nutrients there are available to plants.
We, as gardeners and growers have become so accustomed to thinking that we must eradicate all plants other than the crop that we are trying to grow, and although this can be important early on in a crop’s life cycle, they often benefit from having more plants growing around them because of what these other plants can offer. This year, we are changing some of our growing systems to try to incorporate this idea more into how we grow veg. For example, we will be sowing some of the pathways with yellow trefoil and other low growing plants that can be managed fairly easily. We will also be intercropping more with lots of edible flowers like cornflowers, calendula, dill, and other plants like linseed, buckwheat, poached egg plant and much more. We started trying this last autumn—broadcasting over August and September planted crops with oats, phacelia, buckwheat and linseed and it worked really well.
We like to always try new techniques and constantly question the way that we grow vegetables so that we can not only produce great quality produce but also build soil health and in turn build a more resilient growing system, where crops will be able to defend themselves better from pests and diseases. It is always worth questioning some of the habitual vegetable growing techniques, and trying new and different techniques keeps it interesting and challenging.

WHAT TO SOW THIS MONTH: kale, forced chicory, carrots, beetroot, chard, successions of lettuce and other salad leaves (not mustards and rocket—these will bolt too quickly now and get flea beetle), autumn cabbage, successions of basil, dill and coriander, early chicory—palla rossa and treviso types, cucumbers (for second succession), french and runner beans, courgettes, squash and sweetcorn if not already sown.

OTHER IMPORTANT TASKS THIS MONTH: Keep on top of the seed sowing, but don’t sow too much of anything—think about sowing successionally. Keep on top of hoeing and weeding—ideally hoe when the weeds are just starting to come up on a dry, sunny, breezy day.

For more information about our veg bag delivery scheme go to trillfarmgarden.co.uk/boxscheme.html