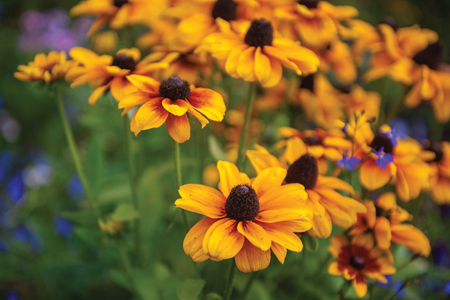 Unlike last month, when the weather could still deliver days that felt like summer, October is when autumn proper picks up it’s skirts and gets going. It’s definitely cooling down now so preparing for winter becomes more pressing. Early in the month the greenhouse, cold-frames, porch, or any other area where you plan to overwinter tender plants, needs to be emptied out, glass cleaned and provision made for moving precious, non-hardy, plants back under cover.
General garden tidying up is important this month because most herbaceous plants are beginning to die down and editing out those that are past their best allows the ones that are still providing structure and colour to shine out. The kind of plants which can still be looking good at this point of the year include; many of the daisy tribe (Helianthus, Helenium, Rudbeckia, Silphium, Solidago etc.); a huge array of salvias, although many are tender, sedums (now renamed Hylotelephium), that stalwart of the late border; Japanese anemones; Asters (another victim of renaming but the common name prevails for me); various grasses although it is the stately Miscanthus, in its many forms, which make the most impact now that it is crowned with its feathery plumes.
Also, of course, those infernal dahlias will still be doing their stuff as long as they’ve not collapsed or run out of steam. Good staking, regular dead-heading (cutting blooms to display on social media) and copious watering during dry spells should keep them flowering right up until the first frosts—hopefully a few weeks away yet.
On a smaller scale, but hugely dramatic where they are allowed to form large drifts, the autumn flowering cyclamen, Cyclamen hederifolium, is well into its stride by now. It usually starts flowering, fitfully at first, as soon as there is appreciable rain at the end of summer—as early as August in many years. Another bulbous species (although cyclamen are strictly corms) that is triggered by cooler temperatures and moisture after the warmth of summer, even in the UK, is Nerine bowdenii. It will have started to send up its long flowering stems last month, the strap like leaves having died down during the summer, with full flowering starting this month and building well into November.
The common N. bowdenii has bright pink blooms, which may offend the more refined gardener who eschews such garish displays (!), but the other available colour selections, and species, are often less hardy or reliable in our climate. Even the knicker-pink variety only performs at its best when planted somewhere where it gets a good baking, in the summer, and reasonably good drainage. Shade, cold exposure and poorly drained soils will not bring out the best in this plant which hails from sunny South Africa.
On the subject of bulbs, echoing what I wrote last month, October is still peak planting time for spring flowering bulbs which are widely available in garden centres, supermarkets and from online specialists. Autumn flowering bulbs, such as ‘Autumn Crocus’ and various Colchicum species, can sometimes be bought as dry bulbs which are beginning to flower. In fact, this phenomenon can be used to produce a novel indoor display and the bulbs, after flowering inside, can then be planted in the garden to flower in a more ‘normal’ way in future years.
Windy autumnal weather can wreak havoc with tall plants which, even if supported adequately until now, may not stand up to proper gales. Shorten the growth on fast-growing / short-lived shrubs, such as buddleia, as this will stop them from getting ripped out of the ground. They receive a total chopping back in early spring in order to keep them vigorous.
In complete contrast; one of my absolute pet hates is when people cut off the extension growth on climbing roses. I can understand why they do it because the stems seem to shoot out from nowhere, whipping around dangerously, at the end of summer. The gut reaction is to ‘chop off their heads’—but this is folly. It is these strong, long, extension growths which are tied in to replace older stems from previous years. Building up a framework of flowering stems is at the heart of rose training as it allows the oldest stems to be continuously replaced by younger, more floriferous, growth from year to year. This is actually at the heart of many of the maintenance tasks in gardening; the constant desire to maintain youthfulness.
For me climbing roses are a bit of an exception to the main body of rose pruning which I tend to do in the fully dormant, winter, period. The excuse for doing climbing roses earlier is the aforementioned risk of damage, if the whippy growths are not tamed before they get snapped off, but also because the growth you are attempting to bend to your will, tying them down into graceful arching patterns, are more flexible while they are young and sappy. It’s worth tying them roughly into position now even if you leave the full training / pruning until the winter, when the absence of leaves makes the framework easier to see. Rough positioning now is easier than trying to bend them onto horizontal wires, to maximise flowering, once they’ve lost their flexibility in a few month’s time.