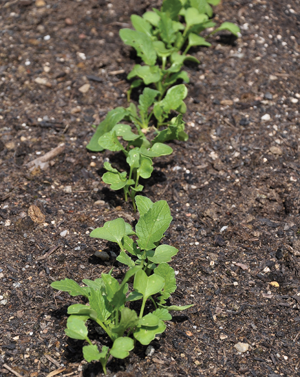 For us, April is the real start to planting up the garden. We have already planted a few beds of early crops in March—turnips, kale, salads, radish and other quick crops, but it’s April when the garden starts to really fill up. The propagating space (a dedicated polytunnel) that we have fills up rapidly through March, and we stand crops out on a hardening off area to make more space in the tunnel for starting off the crops. We have heat benches to begin the propagation and once germinated, the seed trays are put onto cold benches and covered with fleece at night if it gets cold.
It is all down to what the weather is like as to how stressful April is as a vegetable grower on heavy soil. We have thousands of plants to get in the ground, and need to wait for the ground to dry up a bit before getting them in. We aim to prepare beds for the earliest crops in the autumn so that they are ready to go without any need for cultivation in the Spring. Our normal method of preparing the beds is to sow green manures—usually phacelia and cereal rye in September, then mowing them down and killing off with black silage plastic in late January. By the end of March the beds are usually ready to take the plastic off, rake out, maybe broadfork (a broadfork is a wide, long tined fork that is useful to alleviate any compaction caused by the winter rains) and then plant. We always cover our spring plantings with fleece until early-mid May to help protect the plants from the cold and the winds. They settle in quickly and get growing under the fleece really well, just pushing it up as they grow. By preparing the ground in autumn, it takes out some of the stress associated with getting the beds planted up in April, they are pretty much ready to plant up straight away, so time can be spent on planting, the first hoeings, keeping up with seed sowing and then preparing the other beds for later crops.
It is worth thinking about trying to get in quick crops such as radish, salads, turnips, spinach before some of the later planted crops like courgettes, squash, sweetcorn and the like, which are not really worth planting until mid May when the risk of frost has pretty much gone (they can be planted earlier under fleece, but if its a cold spring they may just sit there looking miserable).
Make sure to step back and appreciate the joy of Spring during April—it is all too easy to get caught up in the panic of getting all the sowing done and garden prepared and planted up without fully appreciating everything that Spring has to offer.

WHAT TO SOW THIS MONTH: turnips, chard, spinach, salad leaves—chervil, buckshorn plantain, lettuce, burnet, peashoots, anise hyssop, kales, mustards, agretti, sorell, summer purslane & goosefoot (end of month). Radish, turnips, french beans, fennel, courgettes (end of month), spring onions, cucumbers, dill, coriander, peas and mangetout. We sow all of these into trays in the propagating tunnel to be planted out in April mostly, apart from radish and carrots which are sown direct in the soil.

INSIDE: If you sowed any early salad crops for a polytunnel or glasshouse they can go in at the beginning of March. Also successions of peas and spring onions will continue to be planted.