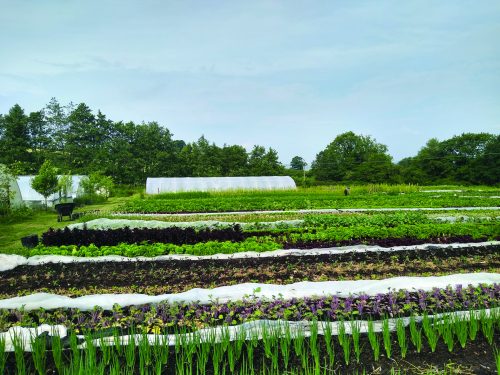 July is definitely the month that we start fully seeing the fruits of our labour. The fruiting crops are either well under way in terms of production or are on their way. The courgettes and cucumbers have been fruiting through June, and we are starting to get the first few tomatoes, whilst aubergines and peppers are on their way.

June was a month of making sure new crops were planted into space made by the end of some of the early crops like radish, salad turnips (which, I must say are an underrated vegetable in this country—they are worlds apart from the winter grown turnips and are much more like a radish really—best harvested when they are still relatively small) and early lettuce and salads.

We planted more salads, autumn kale and cabbage, chard, perpetual spinach and more in these spaces. This will continue through July as the peas, broad beans, spring onions, shallots and garlic are all harvested and new space comes up. Some of the sowings made in June will be able to fill these spaces, with things like chicory and other salads, dwarf french beans, autumn and winter brassicas, beetroot, chard and fennel.

This is one of the best skills to have as a vegetable grower—to be organised and constantly thinking ahead, rather than thinking it’s all done after the first lot of sowing in Spring. This will ensure a consistent, steady supply of produce from the garden rather than gluts followed by periods of not much being harvested.

We continue to sow lots throughout June and July. It is mainly chicory, successions of salads and herbs like coriander and dill as well as fennel, kohl rabi, kale and chard that we tend to sow through July. These, again, are to be planted in spaces where earlier crops have finished producing. Having a knowledge for roughly when crops will stop producing helps to give you an idea of when to sow other crops to take their place.

If vegetables are being sown into trays first, then most need to be sown about 3-4 weeks before they are planted out. For example, we know that our shallots will all be harvested by early August so we can make sure that we sow lots of chicory at the beginning of July which can be planted in the space left behind by the shallots. Sowing into module trays like this means that you can give the vegetables a head start before planting out, rather than waiting for a bed to be cleared and sowing a whole month later directly into the soil.
Although this technique of sowing into modules works well for most crops, you have to make sure that some do not hang around too long in their modules. For example fennel, coriander, dill and other things that are liable to bolt (flower) in the summer months should be planted when they are still very small in the modules. This makes planting a bit more fiddly but definitely makes a big difference in terms of the crops not bolting so quickly.
Other quick growing crops like rocket and salad mustards are just as easy to sow direct into the soil and are ready to harvest after about four weeks. They also germinate very easily, so as long as they get a good watering once they are sown you shouldn’t have any troubles.
Make sure you harvest your cucumbers and courgettes every two to three days so that they don’t get too big on the plants, and keep up the hoeing (especially a week or so after new plantings). In terms of watering whilst it is hot and dry, just prioritise leafy green veg and new plantings, and it is better to give a good long soak every now and again rather than little and often. This will encourage the roots to go deeper for water rather than just staying up near the surface.

We are running a Market Gardening Course as well as Salad Growing and Seed Saving courses at Trill Farm later this year where you can learn more about the techniques that we use to run the market garden at Trill Farm. Check out http://www.trillfarmgarden.co.uk/courses.html to book a place on the courses and for more details.

OTHER IMPORTANT TASKS THIS MONTH:
Try to clear beds where crop harvests are coming to the end such as broad beans, peas, spring onions, lettuce and shallots, so that you can put in newly sown crops straight away. We either flail mow old crops and cover with thick silage plastic for 2-3 weeks or remove the crops by cutting them off at ground level and then hoeing the bed before planting.