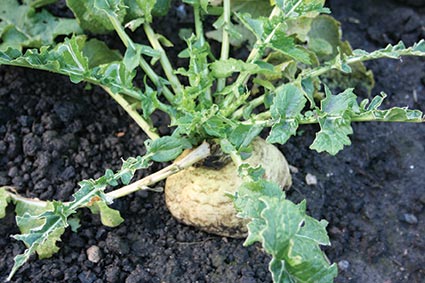 Care is needed for summer vegetables if dry: keep watering ones that set fruit, such as courgettes and beans. Courgette leaves have a habit of getting mildew and dying back to allow the sun to ripen the skin of the fruit below, but watering reduces mildew and increases production. Runner beans need cool nights to set fruit, which is why they often wait until September to grow more beans.

At the beginning of the month sow turnips, ready to eat small by October and big by March. Sowing in seed trays or modules on a trestle or in a cold frame can keep flea beetle off until transplanted in September. Flea beetle likes it hot and dry, so subside as it cools in September. We have tried various varieties, and find them all good, the main guarantee of good taste being enriched soil and quick growth. This year we will sow a three year old packet of Snowball and plant at a 10” spacing. In our garden we lift them through tghe wonter as required, but if you have a cold winter, you may need to lift and store them.

Mid-month sow spring cabbage for harvest in April / May. Sowing in seed trays or modules should keep them away from caterpillar and flea beetle until transplanted in September. Then real trouble begins, with pigeons, rats, rabbits, mice and badgers. Stout fencing keeps our badgers out and cats do some of the others. At all times we have a plague of pigeons who dive bomb our netting. Fleece will keep them off, but often blows or rips away in stormy weather, so we no longer bother with this crop!

Last year we sowed outdoor rocket after carrots on the 1st & 27th August. Watering every day showed we had sowed far too many of the tiny seeds, it was fiddly thinning them out. The first sowing, while very productive, ran to seed before winter set in. The second sowing kept producing leaves through the winter, although it was so mild these too bolted by March instead of April/May. It would help if we had picked the leaves harder to stop it bolting. So the date of sow is your choice and gamble on the weather. Our current favourite is Salad Rocket, but there is a big choice out there.

Chard will survive winter if planted early this month, more strongly if planted in July. The white and yellow chards are hardier than the red. True spinach, with its much meatier and tasty leaves, and less productive than chard, can survive for a while outdoors, especially the hardy variety Medania.

Little Gem planted now should heart up beautifully in October. If it is wet, watch out for slugs moving in as the lettuce take heart.

Sow winter salads for outdoor growing—later in the month for indoor crops. Winter salads are generally more productive indoors, but if well established by the fall they will fare better. Rocket, pak choi (beloved of slugs), mizuna, mustards, chervil, coriander and endive scarola (for harvesting whole as soon as hearted) all produce in a mild winter.

And what did the astronaut think of the restaurant on the moon? The food was fine—if a little on the light side—but there was no atmosphere.