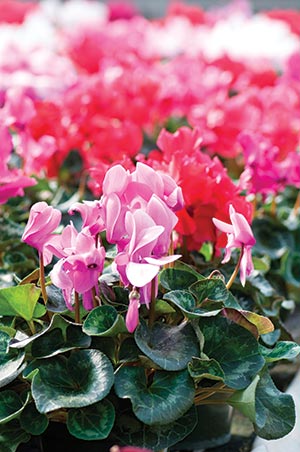 It seems that daring to mention our pretty ‘fair’ summer so far, in last month’s article, didn’t jinx things as we’ve continued to have a good degree of sunshine, warm temperatures and not too much rain. Recent thunderstorms, with their associated downpours, have actually been mostly welcome as they have ‘freshened’ things up a bit.

As soon as we get a good soaking, following a period of dryness, after midsummer my huge population of autumn flowering cyclamen, Cyclamen hederifolium, are coaxed out of dormancy and start to throw up the odd flower. They don’t produce their carpet of blooms until September/October but I find their fitful flowering now quite depressing as it reminds me that summer is on the wane. So, moving swiftly on…

So far, in this ‘fair’ summer, plants should not have suffered from drought stress so the time you might otherwise have spent watering can be put to other uses like taking cuttings (see later). Even weeding is reduced because the lack of summer drought means that it takes longer for weeds to grow, flower and set seed so there is less of a hurry to pull them up before they seed around.

Extending the time it takes to ‘run to seed’ reduces the number of generations that annual weeds can have in a season which means a reduced number of seeds in the soil ‘seed bank’ and, hopefully, less of a weed problem in future years. It’s a tiny victory in the battle against weeds but, when it comes to reaching the nirvana of a weed-free garden, ‘Every Little Helps’ as they say!

My main meadow area will get cut this month, I leave it quite late to give everything a chance to set seed, but until it does I make an effort to collect seed from the yellow rattle whenever it is dry. This semi-parasite of grass species is important in weakening grasses which might otherwise out compete the other constituents of a diverse meadow.

I have recently taken back control of the larger area of my field which, for a number of years, I allowed a neighbour to (ab)use with everything from fodder crops, pigs, sheep, goats etc. It’s a right old mess just now, full of not so nice weed species, but I think I’ll try to establish more meadow there too. Sowing the yellow rattle from my ‘proto-meadow’, plus taking the raked up mowings, later on, and spreading them on the prospective new meadow area, should be a good start. A careful mowing regime and the removal of damaging species (predominantly docks and thistles) should, over time, yield the desired effect.

Back in the garden proper, something that’s always worth doing is taking cuttings. Cuttings from tender perennials, such as pelargoniums and those exotic salvias which end up as centrepieces in bedding displays, are relatively easy at this time of year as they are predisposed to rooting. This is also true of cuttings from many flowering shrubs as the growth has had a chance to mature to the ‘semi-ripe’ stage. This means that cuttings made from these shoots are easier to handle and are more able to survive once separated from the parent plant and they root more easily as their hormone levels are relatively high just now.

Take cuttings of pencil thickness, and a generous finger length, then remove all but their uppermost leaves. Insert into compost around the edge of a pot; water in; cover with a plastic bag (supported on a cane and tied around the edge) and leave somewhere light but not baking until they root. This may take a couple of weeks, or a couple of months, depending on the species. Experiment with anything that has suitable shoots as plants don’t tend to read propagating manuals so don’t know if, or when, they are supposed to root from semi-ripe cuttings. You’ve not got very much to lose but plenty to gain if you manage to produce any new plants by this method.

August is the traditional time to cut yew hedges as it removes all the extension growth that they have put on and gives them plenty of time to recover before any severely cold weather arrives. Established hedges can be clipped right back to where they started from; hedges which have yet to reach their desired height can be allowed to keep a few inches of new growth but not all of it. Clipping during their ‘formative’ years will promote bushiness and density although I can understand that the impatient gardener my baulk at removing a good proportion of height which his, or her, vigorous young hedge has put on. As with so many things in gardening; being tough now will reap much bigger rewards in the future.

Now is a good time to think about what you are going to need in the way of spring flowering bulbs, as these are best ordered pretty soon, but it is also the right time to plant autumn flowering bulbs. These can be popped into the ground, or containers, to give you an almost instant ‘pick me up’. Autumn flowering crocus, colchicums and cyclamen are the usual suspects but more unusual species, such as Sternbergia, are worth seeking out if you want more of a challenge (the latter is said to prefer a “deep, rich, alkaline soil” which might explain why it struggles in my garden).

Elsewhere in the garden it really is a case of ‘steady as she goes’. Keep watering and feeding plants in containers in order to keep them flowering for as long as possible. Regular deadheading will extract the maximum performance from annuals because they are programmed to keep blooming as long as they don’t set seed. If you are going away on holiday for a couple of weeks remove all the flowers and upcoming buds before you go, plus arrange for someone to do the watering in your absence, in order that they don’t all run to seed before you return home.

As ever, whatever type of garden you have and however much gardening you actually want to do—enjoy it!