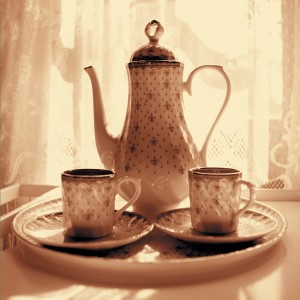 In the annals of my memory, the most resonant echo is that of afternoon tea. It is the meal to which the term ‘treat’ almost invariably applies. Tea is an occasion, to be taken occasionally, a set-piece with, like all good plays, a beginning, a middle and an end; replete with the things that we don’t get every day. There are teas I remember so vividly from my childhood that I can almost hear the silver teapot, covered in its hand-knit stripy tea-cosy, spouting amber hued China tea into the elegantly handled, thin-lipped Coalport china.

At my grandparents house in Sussex tea was either wheeled into the drawing room on an old-fashioned trolley, or, if the cousins were over for the day, we went into the dining room where the oak refectory table was laid, end to end, with such a feast that I felt like Frances Hodgson Burnett’s little princess, Sarah Crewe, when she had climbed across from her attic room to the house next door to be greeted by a fire and a table ablaze with all the delights a child could ever dream of.

At my grandmother’s there would be rows of triangular sandwiches, the crusts removed, brimming with egg and cress, home made strawberry jam or cucumber, Shippam’s crab paste on soft fingers of bridge rolls and scones split and spread warm with thick butter. There were Fuller’s Fancies, tiny sugar-mouse-pink iced cakes and Fuller’s coffee and walnut cake, chocolate Bath Oliver biscuits so thickly, darkly covered in chocolate that there was barely any biscuit inside. There were always home made cakes, double-deckered Victoria sponges spilling cream and raspberry jam and sprinkled with icing sugar with the cake-rack pattern showing through; squdgy ginger cake all damp and treacly, a pink and yellow checkered Battenburg, shortbread biscuits gritty with sugar.

If we were in London, the tea-time treat after the dentist was a trip to Fortnum’s Fountain with our grandmother, which we thought the most sophisticated place to take tea in the world. We didn’t even have to attempt a sandwich and our hearts’ desire was always reassuringly the same: freshly squeezed orange juice, a slice of chocolate sachertorte and blackcurrant ice cream which came with a spumy squirl of whipped cream and a smart, fan-shaped wafer. I think my brother Daniel and I occasionally rose to the challenge of a ‘Dusty Road’, which, if I remember correctly, was a concoction of blackcurrant and vanilla ice creams, a cloud of cream and bashed up meringue and spoonfuls of syrupy blackcurrants trailing through it.

Later, when we spent summers in the west of Ireland, we were taken to tea at the house of an English high court judge and his wife whose perfect, square Georgian house sat shabbily next to a turfy-black fast flowing river on which they fished, bordered by flame coloured montbretia, in which we swam before tea, our legs yellow and freezing under the water which rose after a storm and re-directed itself through the drawing room. A thing which happened too regularly to make its tide-marked walls worth re-decorating.

Lady Harman presided over these teas, which her cook, Mary, had made on the smoky turf filled range in the back kitchen. At the front of the house as we entered was, to the left, a room that smelt only of fish, for this is where the salmon were weighed on a huge pair of old brass scales, and rods and nets and boots straggled down the hallway and into the fishing room where there was an assortment of sepia photographs of men in waders holding out their beautifully red and black polka spotted salmon, their weight and date inscribed underneath.

From the bushes up-river were picked damsons and whitecurrants, redcurrants and raspberries, from which the best jellies and jams I have ever tasted were made and brought to the table in bowls with home made soda and white bread, already sliced and arranged on the plate. The dishes of butter with little butter knives and the silver jam spoons were as fascinating a part of the feast as the tea itself.

The cakes were great turrets of damp fruit or cherry cake, the edges scorched crisp in the old range and always a Madeira cake slightly scented with lemon zest. And perhaps a classic Irish porter cake filled with dried fruit and blackened with Guinness. A cup of milky Barry’s brew, the prevailing Indian tea in Ireland, was poured into a saucer for Nutmeg and Wafer, the house Labrador and mongrel, to lap as we supped ours.

I guess the romance of tea has never quite left me. My three children remember our Somerset next door neighbour Jane’s teas in precisely the same way. Always home made jam on the bread, biscuits from tightly sealed Kilner jars which their small hands had to struggle to unscrew: chocolate fingers, shortbread, Jaffa cakes and a proper cake. Never shop bought.

At Christmas we go to The Goring hotel for the best tea I know. We don’t eat lunch before it and we can never eat supper afterwards. Afternoon tea is served there between the hours of 3.30 and 4.30. First a miniature glass of crayfish cocktail before the guinea fowl, egg and cucumber sandwiches which come in tiers on bouncy fresh bread, then the scones and jam and Devon clotted cream arrive, warmly inviting the cream to dribble a little in their heat, followed by an assortment of cakes and concluding with a glass filled with home made trifle which we are usually too full to eat with the relish it deserves. Thank God for the squashy sofas. Charissa once lay down before the cakes arrived and fell asleep she was so full. There is such a choice of proper leaf tea, constantly replenished, that it is difficult to decide on which refreshing brew to ask for. The clink of teacups and china is both soothing and invigorating. It is a treat in the real sense of the word, not to be taken often enough to constitute a habit. Habits, after all, can never be classed as treats.

The ritual of tea and sandwiches may have been invented to bridge the long gap between lunch and dinner, but a tea of this ilk is a feast in its own right, not a mere interlude.

Egg sandwiches, the still just fluid yolks crushed with butter and a little salt with a fork, spread into brown bread and spruced up with cress should be eaten at no other hour. They work curiously well with Lapsang or Indian tea, their savouriness leading you towards the sweet.

As the evenings draw in, afternoon tea comes into its element and we begin to bake again after the summer months of ice creams and fruit tarts, syllabubs and fools. As autumn arrives ginger cake with its minerally blackstrap molasses and spice: cinnamon, cloves, nutmeg and allspice, is the cake I most want to devour. It improves with age, stays delectably damp and is all the better for being buttered if you don’t want to begin with the bread.

Turn to my Tamasin’s Kitchen Bible and you can wallow in it, as I will be doing in the autumn months, as child-proof to make as it is to eat, a tea-time treat each and every time.

We are famous for our cream teas in the West Country. The single, most obvious reason, other than our magical coastline and dipping valleys sheltering patchwork pockets of small fields and protected by impossibly high hedges and kamikaze, single-track, windy-veined lanes, is the temperate climes with which we lure the tourist in search of the England we all hanker after if we don’t actually live in it. And the clotted cream.

No matter the border dispute between the Devonian and the Cornishman on whether the scone should be spread first with the jam and then the clotted cream – to show it off, according to the Cornishman – or the clot before the jam which the Devonian prefers, hiding the light under the sweet bushel of sticky red-stuff.

I am all for personal preference and liberality, in both senses of the word here. The most important thing has to be the brilliance of the baking, its freshness, its warmth, its not being studded with dried fruit; a scone for a cream tea should be plain, old-fashioned; the jam should be home made, runny yet clotted in its own right with whole strawberries that haven’t been cooked to pulp-point, or the seedy sweetness of the raspberry, not over-sugared, not quite set. Finally, the cream has to be clotted, plentiful, yellow-fresh and with that crusted top that is almost honeycomb in texture and satin-soft beneath to the spoon.