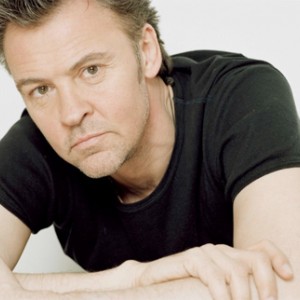 Sir Bob Geldof and Midge Ure were among the artists who appeared on television’s This is Your Life, when the big red book was wheeled out for musician Paul Young. Apart from describing him as having one of the finest voices in the music industry, they also described him as being one of the nicest to work with and it doesn’t take long to realise how right they are.

Paul Young was one of the most exciting vocal talents of the eighties, dominating the charts with gems such as Wherever I Lay My Hat, Come Back And Stay and Every Time You Go Away.

Paul’s career has certainly had its share of time on the roller coaster. He is probably one of many that would like to forget offering one of the more banal novelty songs, Toast, which he released in 1978 when he was with the Streetband. Soon after, he formed the Q Tips who toured extensively, notching up over 700 gigs in three years. A solo contract offer followed. “It wasn’t really what I wanted”, says Paul. “I was always more comfortable in a band”.

Today he spends his time juggling between concert tours for ‘Paul Young’ and his other band ‘Los Pacaminos’, a Tex-Mex band that has turned many a pub into party land over the past ten years.
We caught up with him in between tours and asked how he managed to juggle the two bands.
“Well, I’ve been doing the Pacaminos now for ten years and I’ve been doing my solo stuff for twenty years, so really it’s like playing two characters. The hardest part was last year – I did a Paul Young tour and had Los Pacaminos as the support act! That was too tough. I shouldn’t have really done it – it was madness, you know, to be doing that amount of work on stage”.

Paul’s ability to work on stage has never been in doubt. He has just come back from Dubai and his Paul Young show still calls on all his energy resources. Paul is scheduled to play Wembley Arena in December this year. He played six nights straight at that venue in 1985 – the year of Live Aid. Anyone who saw his acrobatic shows in those days watched in awe at his energy – his trick of sliding across the stage on his knees was hard to forget. He remembers those as very physical shows. “As well as the fact that all the songs were pitched at the top of my range, a lot of energy was needed”, he says. “My manager assumed we could do six in a row, I don’t think I could do that now, but we just about did it then”.

So how does he manage to psyche himself into a different persona when it’s Pacaminos time, do they dress differently? “Yes, we dress up differently. The Pacaminos are in cowboy hats and shirts and boots, there’s an accordion player, a pedal steel player and as soon as the music starts, you know exactly where you are. It’s immediately obvious I’m not in a Paul Young show, so it’s easy to make the change”. That change can be pretty rapid too, Paul has three Pacaminos gigs coming up followed by a trip to Poland and Lithuania and later Australia with his Paul Young band. How different is the backing band? “When I’m doing my stuff, there’s a lot more technical stuff – a lot more drum samples, keyboards and synthesisers – stuff like that. But the Pacaminos is very stripped down, no drum machine or synths or anything like that.”
Is it more fun than the Paul Young shows? “It’s all very different. The good thing about doing the Pacaminos is; one, it’s a bunch of friends and also I’m not the lead singer, so I’m not singing all night. It’s a nice way to be able to play music and get the fun back into it”.

Paul’s enthusiasm for the wealth of talent in the Pacaminos is infectious. The band member’s credits read like a list of who’s who in the music industry. Names like Pete Townsend, Manfred Mann, Robbie Williams, Joan Armatrading, Jools Holland and The Pretenders are amongst those that band members have played with. Guitarist and vocalist Drew Barfield, whose songwriting talents with The Keys and The Big Heat brought him to the notice of bands like Go West, Joe Jackson and Level 42, worked with Paul on his second and third albums. “I remember hearing a tape of his songs and thinking he should be doing his own songs”, says Paul. “When I eventually got to write with him and thought about starting the Pacaminos, I thought it would be lovely to have Drew, he’s got a great voice. Then it turns out the guitarist also has quite a good lead voice and the accordion player can sing lead vocals too. So when you go to see the band you’ve got this whole variance, I do a couple of songs and then it’s ‘please welcome to the microphone, Matt the accordion player’, so you get to meet and greet the whole band and believe me they’re worth meeting”.

The Pacaminos have two gigs in November in the local area. They play The Bell at Ash, Nr Martock on Friday November 21st, Tel. 01935 822727 and St Clare’s in Seaton on November 29th. Tel. 01297 20679.
Paul Young fans will have an obvious reason to catch the ‘Pacs’ live but these shows aren’t just for his fans. They showcase a great selection of talent on one stage, doing what they love, the way they love to do it – and those are the times when some of the most memorable moments of musical history are recorded.