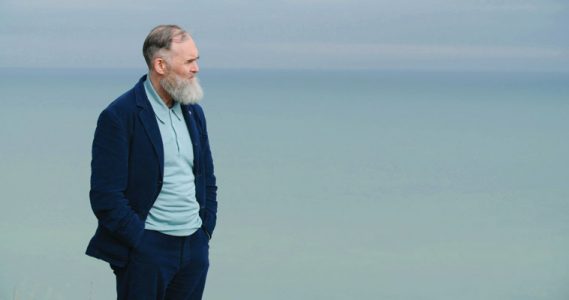 In August, film Director, Producer and Distributor David Nicholas Wilkinson will come to Lyme Regis for a screening and a talk about his new film Postcards from the 48%. He spoke to Fergus Byrne about his motivation, his passion and his fears for the future of those that will live with Brexit.

With such a close margin in the 2016 referendum, the words ‘Brexit’ and ‘turmoil’ were always destined to spend a great deal of time together, and thus, inevitably, dominate this nation’s media headlines for a lot longer than any of us would have liked. For David Wilkinson, Director and Producer of the film Postcards from the 48%, it is precisely the fact that the margin was so small that drove him to try to put the views of the 48% across. He had no interest in trying to produce a balanced view of the different opinions in the debate about whether to leave the European Union, he simply wanted to highlight what he feels is the forgotten opinion.

He believes that the Remain argument has been all but closed down by most media because Brexit is ‘a done deal’. He points out that because news outlets have to report daily on what the Government are doing, ‘every day they’re putting forward the Brexit agenda. The only time we ever get a chance to put our own is in a kind of Question Time situation, and they always descend into arguments and insults.’

With acting credits that go back beyond Z Cars David has also produced and/or distributed over 40 films, TV and theatre productions and Postcards from the 48% is his third as Director. However, he is no stranger to the world of politics and credits his enthusiasm to pursue his need to give Remain a voice to an unusual source. A former business partner, the late Andrew Alexander, often invited David to his house in Sussex where Enoch Powell was also a guest. ‘Enoch and I became friendly’ said David. ‘I don’t think we ever agreed on anything but we always got on. I liked him, he liked me. Enoch was always Eurosceptic and he had the view that: “we live in a democracy, everybody may disagree with me but I’m putting forward my view and I have the right to do that and I will do it daily.” And that’s how David felt about making his Remain view. ‘I get trolled all the time by people saying “this is a democracy we won now f*%# off” and several of them use pictures of Enoch as their photograph. So his thing was; you always fight for what you believe in, and that’s all I’m doing. I’m putting the Remain point of view.’

In fact, so strong was his interest in making the Remain case that he banned anyone who voted Leave from working on the film—an edict that led to one hysterical conversation with a potential collaborator. He explained: ‘One of them came to me and said “David, you can’t do that, there’s a statute in EU law that states…” and he started to quote it and then stopped when he realised that he, as a Leaver, was using EU law to argue why he should work on a film that was supporting the EU. Bonkers! That’s how mad this whole situation is.’

However, that’s not to say that David doesn’t understand how we came to be in this position. ‘A lot of my relations are quite poor and live in the north and are very angry about lots of different things’ he explained. ‘We have seen lots of industry disappear and they’ve not really been replaced with anything. So you do have generations of people in sort of zero-hours contract jobs, where once you had steel and coal and textile manufacturing, and a pottery industry—and you had a job for life. I know people who said they voted to give David Cameron a bloody nose, and they won, they got what they wanted.’

Ironically, it appears that many of those voting to give what they perceived as an elitist government ‘a bloody nose’, may indeed have got what they wanted, but it turns out to be something very different to what they thought they voted for. Not only did many of the promises made by the Leave campaign turn out to be hollow, but the campaign itself was allegedly illegal according to The Electoral Commission.

In Postcards from the 48%, Boris Johnson’s sister, Rachael, makes it clear that a protest vote was an error: ‘They thought that a vote to leave was like giving two fingers up to the rest of the world’ she said. ‘It just showed, I think, unwarranted, cocky, rule-Britannia self-confidence that I didn’t think was justified. I think we’re stronger together.’

Matt Kelly, editor of The New European newspaper agreed. ‘This angry outburst that happened on June the 23rd 2016 had very little, in reality, to do with the European Union’ he said. ‘It had a lot to do with the failure of politics here in the UK.’

In the film, which is also presented by David Wilkinson, he points out, while walking around Stoke on Trent, that ‘when you’ve got very little to lose, voting for change is very attractive’. He highlights the irony that whilst one function of the EU is to redistribute money from wealthy areas to poorer communities, ‘it is likely that the most deprived Leave-voting areas of England will lose out if Brexit happens.’

But the failure of politics is not the only recurring theme for David. He found a deeply unsettling apathy from too many of those that will live through the Brexit aftermath and is frustrated that those people that are inheriting life after Brexit are not standing up to be heard. ‘So many of them just don’t seem to be fighting’ he says. He bemoans the lack of voice especially from those under thirty-five. ‘Very few of them were willing to be in the film. Many of them were just not interested. It will affect them more than anyone. There’s a real attitude there that they can’t do anything anyway.’

The attitude that people ‘can’t do anything anyway’ may well be one of the most worrying trends in youth politics, but another observation that David made, points to a general lack of fight in more liberal and socialist circles. Talking about those that push the hard Brexit agenda, which he believes will make the middle and working classes much worse off in the long run, he says that people have been fooled into supporting those that simply don’t care about them. Nigel Farage, he says, who ‘went to public school’ and ‘worked in the city’ is seen as a man of the people because he ‘drinks a pint in the pub.’ To David, this is simply manipulation of disgruntled voters. And talking about Jacob Rees-Mogg, the Brexiteer who has already moved his hedge fund to Dublin he says: ‘All these working-class leavers are saying “well, good for him, he’s a businessman he’s got to do what’s best for him”’. However, in the ‘not too distant past’ he says ‘that Lord Snooty person would have been an enemy!’

Even more depressing and a sure sign that the ‘divide and conquer’ rule is being cleverly applied to anyone that might stand in the way of Brexit, is what David described as the ‘bickering’ that goes on between the various Remain groups. ‘None of them appears in the film as an entity’ he says ‘but some of them approached me saying “we will happily give you £150,000 to make your film but we must present it”’.

David had hoped that those wishing to put forward the views of the 48% would just get round a table and thrash it out. ‘I come from the theatre originally’ he says ‘and that Esprit de Corps that we all work together I find is lacking in politics, particularly with Remain.’ The fact that some people wouldn’t participate because of conflict with other groups made him fume. ‘For goodness sake—this is about stopping Brexit!’ A point that brings us back to the film and what he hopes to achieve by making it. He and his co-writer, Emlyn Price, trawled through about 65 hours of filmed interviews at Emlyn’s home in Frome in Dorset, to try and decide what not to include—a process known as the ‘paper edit’. That left them with 35 hours of what David described as ‘really good’ interviews which they then had to edit down to just 2 hours.

The list of contributors is impressive. Amongst them, Mark Constantine, the Dorset based co-founder of the British cosmetics retailer LUSH which has revenues approaching £300 million per year, makes the simple but glaringly obvious point that borders are never good for business.

Patience Wheatcroft, the Conservative Party Peer who was editor-in-chief of the Wall Street Journal, editor of the Sunday Telegraph, city editor of The Times and deputy city editor of the Daily Mail admits the EU is a flawed organisation but believes it’s better to reform it than leave it.

Alastair Campbell asks the question: ‘knowing what we know now about the Brexit that people have voted for, is it worth it?’ Because, he goes on to say, the Government don’t want the public to know the impact of Brexit because they know ‘it’s going to be bad!’

Postcards from the 48% obviously makes no effort to look at any arguments other than those that believe we should remain in the European Union. This gives the film a level of honesty and makes it attractive to those that hold a Remain view, but will it make any difference to anyone’s opinion? David believes that by releasing it he can reach a lot of people, especially those that now wonder if they made the right decision. ‘I know if it goes on television that Leavers will watch it. They’ll never admit to watching it and some of them will never change their minds, but others will go “hang on I didn’t know this and I didn’t know that” and some of them may change.’

Regardless of whether your politics lean towards Leave or Remain, Postcards from the 48% represents some of the views of nearly half of the voters in the 2016 referendum and therefore deserves a platform. At the time of writing, the words ‘Brexit’ and ‘turmoil’ are, if anything, more closely aligned than ever. Two cabinet ministers have resigned, the government’s White Paper continues to be a source of major dispute and Theresa May looks increasingly like a frazzled teacher trying to herd an aircraft hanger full of adolescent cats. In the meantime, that other mantra ‘Brexit means Brexit’ thumps out a bass beat that leaves only one question—does anyone really know what this country voted for in June 2016?