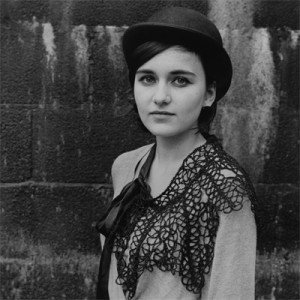 Some years ago Julia Mear worked for the Woodruff family at their home in Offwell, East Devon. It was a busy household with four lively young children. Just after the revolution in 1990 Sue and David had travelled to Romania and managed, with a degree of tenacity, to successfully adopt two small babies, Ana and Alex. It therefore came as little surprise to Julia when in 2000 she met Ema, another addition to the Woodruff family, who had just arrived from Romania. Though Ema has only just turned twenty, her life is already a rich tapestry. This is her story.

‘When I arrived in England at the age of eleven I really thought I was entering a ‘brave new world.’ With the invaluable support of Sue and David Woodruff, and aided by the funding from a generous academic scholarship, I came from Romania to start school in Devon and to live with the Woodruff family. Life is so different at home in Romania, living in a city, my parents have never owned a car and I certainly had never travelled by plane. Coming to the West Country felt a million miles from the Transylvanian city of Cluj-Napoca where I was born and brought up.

When I go back to visit my parents and my own brother, Andrei, I see a changing world. The fragile economy wavers and unemployment is high. Like many thousands more, my mother is forced to work abroad as a chef to support the family, as my father is unemployed. The effects of the recession are not just felt here and in the USA as the media sometimes portrays.

My parents recall the days of the communist regime when food was rationed and there were virtually no opportunities to travel. They can remember, as a young married couple, practising a dance to be performed with fellow workers to welcome Ceausescu on a visit to the city. My mother particularly likes to return to her village, Parduren, which means ‘edge of the forest’, and is situated in the hills outside Cluj. Cut off from the city when the snow lays thick in the winter, little has changed in the village since my mother’s childhood. The small houses with their patch of land where they mostly grow vegetables, now have electricity, though there are generally no bathrooms.

Many young Romanians travel to other countries to seek their fortune. There is a very popular green lotto competition where a winning ticket wins a visa to America. The ‘brain drain’ of the young and able from Romania seems inevitable until opportunities to stay at home are better and the endemic corruption ceases. However home will always be home for me. As I step off the plane to visit my family there is always huge excitement. There will never be anything as good as the love of your family and some real home cooking.

In 2007 I realised a dream and gained a place at Newnham College, Cambridge to read Modern languages. When you read this I will have just arrived in Buenos Aires to study for one year at The University of Buenos Aires in Argentina prior to returning for my final year at Cambridge.

From a very young age I have always been interested in different cultures and languages. I now speak five languages fluently and I have just started to learn Japanese, which is proving a real challenge. With the absence of formal classes and textbooks when I was growing up as a child in Romania, I used to watch the foreign language channels on TV, and I tried to learn the words by ear. After the fall of communism when Ceausescu was executed with his wife Elena on Christmas Day 1989, the television channels were no longer controlled by the Communists with their constant propaganda. The networks were flooded with foreign language channels, films and soap operas.

I became fascinated, particularly with Spanish and Latin-American culture. Buenos Aires is such a vibrant city. I love the buzz, I love the colours and I love the smell. It is like I imagine Paris might have been fifty years ago but with no boundaries. I have a healthy ‘passion for fashion’ especially shoes. Teetering heels are commonplace here in Buenos Aires which seems incongruous against the poverty of the bare footed street children. Excess sits beside poverty. Gold Rolls Royce cars travel beside old bangers done up mostly with bits of tin and string.

Though I am often away, it is always lovely to come back to Summerdown and the Woodruff family. When I studied English I was introduced to the work of Thomas Hardy. Hardy often alluded to the fact that though life may carry on at a frenetic pace around us, the beauty of West Dorset remains steadfast. In my few quieter moments I reflect that wherever I am in the world and wherever I lay down my head, places I love, like Lambert’s Castle, will always be there.

My ‘English brother and sisters’, as they have become, and I, are all beginning, as we move on from being teenagers, to go our separate ways. However, on the rare occasions that we all manage to come back home at the same time, we all want to walk, to talk and to laugh together at the places we have all come to love, like Stonebarrow or Golden Cap or just around the fields at Summerdown.

My life might appear quite eventful but so are the lives of my family. Sue and David are nearing the end of a contemporary cob and thatch build at Summerdown, the main work being done by Julia’s brother-in-law David Joyce. Though we are giving Sue and David a bit of grief likening the house to a ‘Hobbit House’ and question why they would want to build out of what essentially is mud and straw, it is actually a fantastic example of strong design and beauty.

Tom (pictured with all of us above) is studying at Nottingham University. For the last two years he has spent the summer working in the USA for a charity funded by the late Paul Newman that gives terminally ill children the chance to have the holiday of a lifetime. This year Tom completed the London Marathon for the charity. We are all hopelessly proud of him.

Alex is training to be a plumber – a great extrovert, we have a lively friendship. Ana, despite being absolutely tiny is excelling in the equine world and Amy is a great sportswoman who seems to face all challenges with her customary humour and determination.

One day I hope I will be able to support my parents and family in Romania. It must have been very hard for them to let go when I came to England at such a young age. The opportunity to go to Cambridge was amazing; it is a very cosmopolitan city. From initially being very shy, I have become more outgoing with what many would consider a rather debatable taste in fashion; mostly hunted out in thrift shop corners.

My life is building up like a jigsaw puzzle and I already have some solid corner pieces. One is my family at home and my home country of Romania. The other is the Woodruff family, Summerdown and the West Country. Who knows what the other pieces of the jigsaw will be made up from but I know that the places and the people I love will always be there. As Hardy says in his poem, In Time of ‘The Breaking of Nations’

…Yonder a maid and her wight

War’s annals will cloud into night