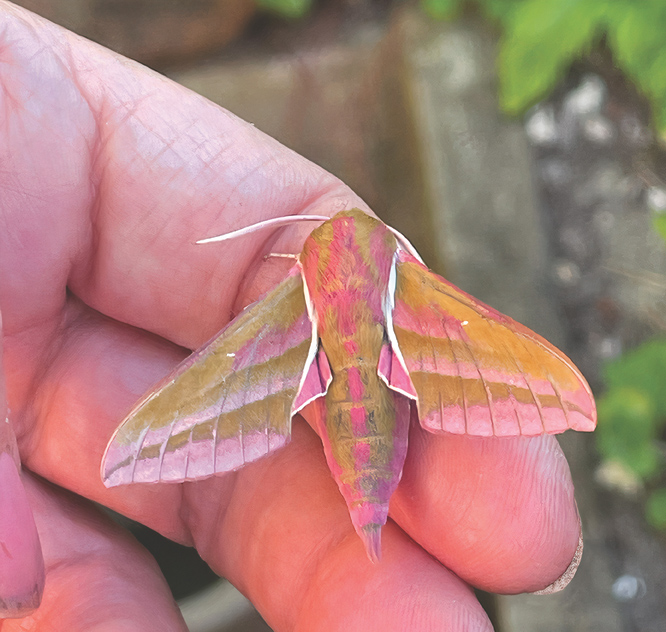 Before we came to the village last autumn I had not run my moth trap for years. It was difficult to do in our small garden in London because you had to shield the bright light with umbrellas and such, so you would not keep the neighbours awake, and anyway, not an awful lot flew into it. Where it did work, supremely well, was in the garden of the old farmhouse in southern Normandy where we spent holidays when the children were small; each year I set it up at the edge of the orchard, and wonders flew in, out of the hot summer night.
When we came to Dorset I was thinking much more about day-flying butterflies than about night-flying moths: about the clouds of blues, the chalkhill blues and the adonis blues, that flash in the sun above the chalk downlands in high summer. Even more, I was thinking in particular about the famous hill above the village, considered one of the best butterfly sites in the country. For not only does it have a plentiful supply of alluring species such as green hairstreaks, grizzled skippers, and marbled whites; it holds the lovely and uncommon marsh fritillary, and most of all, it houses a real rarity: the Duke of Burgundy.
His Grace the Duke, as some enthusiasts call it, lives in scattered small colonies and is on the wing from late April to early June. I knew it was found on the hill and I invited my friend and fellow butterfly-buff Jeremy to come and find it with me; in the first week of May he came all the way from Suffolk and after a long search, find it we did, although I should confess here that we had the help of Martin Warren, who used to run the charity Butterfly Conservation, and knew exactly where to look. It was thrilling: a tiny brilliant lattice of orange and black, a rare jewel.
It was not till the hot weather came in July that I started to think about moths again. I was walking to the shop when I saw something out of the corner of my eye which stopped me in my tracks: sitting serenely on a garden railing was an elephant hawkmoth. In the middle of the village. In the middle of the day. I could scarcely believe my eyes. It’s a big insect with a striking colour scheme of pistachio green and pink, perfectly reflecting the colours of the plant its caterpillars feed on, rosebay willowherb, and the sight of it suddenly reawakened all my forgotten moth enthusiasm: a few evenings later I was taking the moth trap out of its case and setting it up in the garden.
It’s a simple device: basically an extremely bright light which attracts moths out of the dark, with a box underneath, so constructed that they can fly in, but not out. You can line the bottom with cardboard egg boxes which provide perfect nooks and crannies for them to hide in; they go to sleep, and in the morning can be identified and then released unharmed.
I was not disappointed: in the morning no fewer than six elephant hawkmoths were asleep on the inside of the trap, as was a privet hawkmoth, which is an absolute giant, big as a bat. There were other lovely (and charmingly-named) creatures which most people never see: a ruby tiger, a swallow-tailed moth, a lesser yellow underwing, a silver Y, a buff arches, a magpie moth, a drinker, a peppered moth, a lackey, a large emerald… and some I didn’t have time to identify before the sun grew too warm and they needed releasing. But one of the elephant hawkmoths obligingly crawled onto my fingers for a photo before flying off.
It’s a hidden world, the world of moths, yet a marvellous one: I was thrilled to view it once again and to realise that Dorset is as rich in moths as it is so rich in butterflies, if not richer (there are only 58 regularly occurring butterfly species in Britain, yet there are nearly 900 larger moths, many of them exquisitely beautiful.) There are no street lights in the village: the night can be a wondrous time with the complete quiet and the brilliance of the stars; and now I realise there are other wonders out there too, which a wooden box with a light on can draw out of the dark, like magic.

Recently relocated to Dorset, Michael McCarthy is the former Environment Editor of The Independent. His books include Say Goodbye To The Cuckoo and The Moth Snowstorm: Nature and Joy