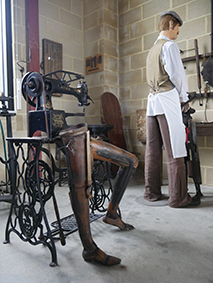 Margery Hookings visits Chard Museum to find out more about James Gillingham, surgical mechanist and manufacturer of artificial limbs. He was a contemporary and fellow townsman of aviation pioneer John Stringfellow in Chard during the 19th century. Both were ahead of their time in their thinking and technology.

It’s an incredible collection. Even more impressive is the fact that the reason all this is here, out in a large outbuilding at the rear of the premises, along with farm implements, a funeral bier and a display of wedding dresses through the ages, is because of a man called James Gillingham.

He was a pioneer in the making of artificial limbs and surgical implements and was born in Chard in 1838. By the end of the century, the lives of thousands of people had been transformed because of Gillingham’s work. And, after the horror of two world wars in the 20th century, his family business helped even more people get back onto an even keel.

Gillingham was a contemporary of another Chard resident, John Stringfellow, who invented powered flight. Gillingham admired the inventor greatly. Both of them were way ahead of their time. Each one is the subject of large, permanent exhibitions at one of the most interesting local museums I’ve ever visited.

Museum chairman Vince Lean takes up the story: “In the mid-1800s, James Gillingham was a boot manufacturer. This was not the same as a cobbler—he was an artisan workman and he used the methodology for bending leather in his work of making artificial limbs.

”Just imagine this man—he had no medical training but to his credit, he persevered and probably came in for a fair bit of criticism from the medical profession. In Victorian times, a lot of people were born deformed or had accidents at work. Whilst Gillingham didn’t do things for free, he had a series of charges so people could pay so much a month, so he was something of a philanthropist. He was helping anyone who needed his assistance.”

This classic Victorian entrepreneur not only found his niche, he carried on developing his products to continually improve people’s lot. He kept copious records featuring ‘before and after’ photographs of his patients, many of which form part of the museum’s display. “He had a fantastic, lateral mind,” Mr Lean says.

Gillingham’s father, David, was born in Cerne Abbas, Dorset, and was sent to London at the age of 12 to learn the trade of cordwainer. When he came back, he lived with his uncle, William Gillingham, who lived in Thorncombe, before marrying Mary Stoodley in 1835. By then, he was running a successful shoe and boot business, The Golden Boot, where he employed workmen in his shop at the bottom of Chard High Street.

David’s son, James, joined the family business and went to London at the age of 21 as an ‘improver’ with one of the best bootmakers in the city. He was fascinated by shops displaying surgical appliances.

When he returned, he was asked by a local doctor to make a moulded, leather splint for a patient with hip disease. He went on to make a spine support for his sister, Susan, who had injured her back in a fall.

But it was following the wedding of The Prince of Wales to Princess Alexandra in 1863 that James Gillingham went on to make his mark on the world.  Chard, like the rest of the country, celebrated the event with great gusto, including a spectacular fireworks display organised by Gillingham.

Earlier, the day had been marred by a terrible accident in which William Singleton, a gamekeeper who worked for Lord Bridport of Cricket St Thomas, lost an arm. He was loading a cannon when it was fired prematurely. He had to have his arm amputated at the shoulder by Dr N Spicer, the same man who had asked Gillingham to make him the leather splint for a patient.

Two years after losing his arm, Singleton went into The Golden Boot and told Gillingham that, despite Lord Bridport sending him ‘to all the best people’ in London, nothing could be done for him. Gillingham made Singleton take off his coat and shirt there and then and vowed to make him an arm without charge.

The new limb and how it was fitted was a huge success and Gillingham’s fame spread far and wide. His advice on prostheses and operations was sought out by the medical profession, who visited him at his premises at Prospect House in Combe Street. In 1866 he set up J Gillingham & Son with his son, Sidney. By the end of the century, they had treated more than 7,000 patients.

He made mechanisms for dealing with curvature of the spine, paralysed limbs and fractures and dislocations as well as knee caps and artificial eyes. The firm was so successful, it was appointed principal fitter to the Admiralty and opened a branch in Plymouth.

In World War One, demand for artificial limbs rose rapidly. Chard Hospital was the only Voluntary Aid Detachment institution allowed to admit and fit patients for lost limbs, which was directly attributable to the Gillinghams.

James Gillingham was a town councillor, a campaigner for temperance and a strong supporter of charitable causes. His inventions included a lifejacket, a range of heaters, an anti-pick pocket device, a barbed wire cutter and a tool to stop the operator’s hands going near the revolving blades in powered chaffcutters, having seen so many farmworkers lose their fingers.

He also made a lifeboat which he had fitted with rescue apparatus following a double tragedy at Chard Reservoir.

A book by Derek Warren entitled James Gillingham, Surgical Mechanist & Manufacturer of Artificial Limbs goes into detail about many of the people whose lives were transformed by Gillingham’s skill.

During the bitter January of 1881, Sidney Bishop was walking from Bristol to his home in Bridport. At Misterton, he found an open shed where he stood all night. On numbed legs, he walked through deep snow. By the time he got to Bridport, it was found that both his legs were severely frostbitten, as were the tips of several fingers. Both his legs had to be amputated below the knee.

The people of Bridport subscribed to buy him a pair of legs and Gillingham’s advice was sought. The patient later wrote to Gillingham to thank him for his new legs, telling him that he was able to walk to the harbour and back, with a stick in one hand and a basket in the other. Some months later, he walked back to Bristol, averaging 14 miles a day.

Gillingham was touched by the gratitude of working people. Alfred Woodbury, a farm labourer from near Bridgwater, sent him a letter in 1880: “I should be able to scarce do anything without it [an arm]. I can shear 37 sheep a day, for which I get 9s. I can reap the corn with a machine, thatch and rick, pitch hay and corn. I pitched a load of corn from two until six o’clock, 40 stiches on each load, my master gave me 4s for my day’s work. I cannot be too thankful.”

The letter is one of many Gillingham received from ordinary people whose lives he changed.

Writes Derek Warren: “The hands he made, with wooden, articulating fingers—mainly for cosmetic purposes—were of exquisite craftsmanship, and even if they were of little practical use, restored the sense of normality to the user, especially women, and gave back their looks as Jane French of North Petherton, wrote in 1880: ‘I can now go to church on Sundays and hold my books without covering my arm as before.’.”

For those not in genteel occupations, Gillingham created various attachments for arms, such as hooks, rings, knives and forks, spring clips and even knitting and crochet needles.

Gillingham was a man of principle and, for the first 20 years, did not charge anyone, however wealthy, for consultations or fitting, only for the instrument or limb itself. He continued to give the poor special treatment, allowing them to pay in instalments.

One of his most famous patients was Chang Wood Gow (Chang the Giant) who was 8ft tall and suffered from curvature of the spine. Outside Chang’s own family—he had a brother of 9ft who was a general in the Chinese army and a sister of 8ft 6ins—he was the tallest person in the world. He toured Europe, appearing before all the crowned heads, including Queen Victoria.