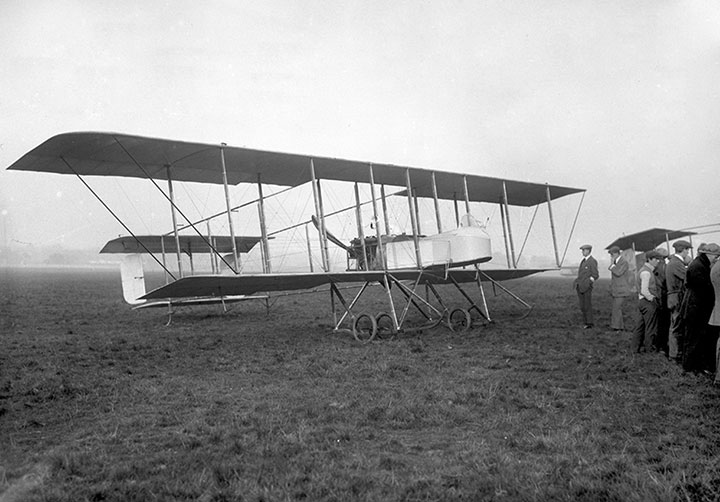 An old dilapidated briefcase was recently found to contain the hand written manuscript of the wartime memoirs of a Royal Flying Corps pilot. Its intriguing story is that of Lieutenant Horace Vernon Caunt. Born in 1892, Horace lived in Morley, near Leeds, he joined the West Yorkshire regiment at the start of the First World War. He received his first taste of aerial warfare when, under canvas with his brigade on the North Downs of Surrey, he got a grandstand view of a Zeppelin raid upon South London. The disturbing flashes and explosions of the raid and the low droning noises of the engines, as five of the great leviathan assembled in the starry skies above their camp on one occasion, taught them a hard lesson. All hands were employed to build shelters, trenches and other forms of cover and “we certainly made good use of them when the necessity arose.”

In the winter of 1915, the Brigade occupied billets in Maidstone where Horace met a Flying Officer of the Royal Navy Flying Service based at nearby Detling aerodrome. Thrilled at the sight of the Naval airman taking off and flying around the aerodrome arriving back with bumpy landings, he jumped at the chance of an aerial trip offered by his new friend. “The pilot took me over Maidstone and from a height of five thousand feet I was able to pick out my billet and other familiar landmarks, it all seemed wonderful to me and from that moment my heart was given to aviation. I decided that at the first opportunity I should transfer to the Royal Flying Corps.”His story goes on:-

“We moved again, this time to Aldershot where we were encamped along the banks of a canal. We all took up punting in our spare time and many enjoyable evenings were spent exploring the numerous little backwaters, easily accessible in our flat bottomed boats. Sometimes I would lie on my back in sunshine and watch aeroplanes flying about over Farnborough longing to be up there,  wondering how I could get up there with him. It was then the course of my military career altered course when a notice appeared through daily orders asking for volunteers for the Royal Flying Corps. My application was sent in that night.

We took our usual punts out that evening, but there was a noticeable silence overhanging our assembly, which I broke eventually when I announced “Well boys, I’m sorry to break up the party, but I have put in my transfer for the Royal Flying Corps.” “No need to apologise old man,” came the reply, “we are all coming with you, our transfers were put in before yours.” This meant a little celebration in a canal side pub and our punts steered a rather erratic course homewards that night.

Some time passed until the Colonel informed us that we had to report for a medical examination. He also asked us to reconsider the decision we had made and remain with the battalion. It was somewhat of an ordeal having to refuse his request, and we were deeply touched to think he would miss us all.

After being declared fit for flying we were given some leave, and then the time came for the final farewells, a last night in the mess with much drinking and many rousing cheers. We all left, eyes smarting I must confess.

Initial training started at Wantage, in Oxfordshire, with rather boring lectures on rigging, engines, morse code, signals and photography. Then the exams, my name is on the pass list and I am posted to Donaster which suits me as it is close to home. The aerodrome was on the racecourse and as soon as I arrived I made for the hangers to see the aircraft and what marvellous machines I thought they were, Maurice Farman Shorthorns, built of bamboo struts and piano wire, they looked like huge box kites with the propeller at the back to push them into flight. Although they would be seen to be comical these days, then, we were quite willing to risk our young lives in them. They used to take off after a long run and clatter across the sky at about seventy miles per hour, do a circuit or two and come in to land on two wheels. They were fondly referred to as ‘Rumpetys’. This machine would give me my first training flight during which I had to let out a wire aerial and then wind it in again. Just after completing this task I hit an air pocket and dropped like a stone. It was rather a hair-raising experience for my first flight, but it was the greatest thrill I had ever experienced, for now I was launched into my new life and had flown in a machine which I should shortly pilot myself.

Several flying hours are recorded in my log-book under the instruction of a Jewish fellow, and it was due to him I made such quick progress. He would take me up under cover of darkness on many unauthorised flights and allow me to take control. Some nights proved ideal for flying and my Jewish friend and I would sail about the sky, about two thousand feet up, both of us singing at the top of our voices. I made great progress at this time and could land the machine myself with very little help from my instructor, but then my Jewish friend was ordered to proceed to an operational advanced squadron overseas. I never saw him again but I later heard he had been shot down over Lille and killed. So died a very gallant gentleman, his faith and creed were different to mine but we were firm friends.

Another instructor took me under his wing, but neglected me entirely until I made a nuisance of myself, but his casual attitude to his instruction proved fruitful. It was a beautiful morning when we took off and after a couple of circuits I landed her, the instructor said “wait a minute, I want to check the undercarriage”. He had a look around and then called out “Off you go then”. Before realising that he had not climbed back into the machine, I opened up and soon was airborne, only then did I realise that I was solely in control. I found myself flying over the town and without the comforting feel of having an instructor in the back seat I didn’t feel so clever now. After a few aerial manoeuvres I found myself with the comforting sight of the aerodrome ahead of me, so engine off, stick forward and as the grass approached pulled  back gently and touched down. I am safely back, I had completed my first solo flight, but nobody’s about, even my instructor had disappeared. He had gone for breakfast. He admitted later that he was relieved to see me enter the mess after which he could enjoy his breakfast. I was then accorded the privilege of dining on the instructors table.

To get my wings I needed to fly another five hours solo and my instructor told me to fuel up and take off and complete them in one flight. It was a lovely morning as I headed south, no air pockets to cause the old ‘Rumpety’ to rock like a camel in the desert, and as we clattered along over early morning shoppers in towns below time slipped quickly by and so did the petrol. By now I was lost so an emergency landing was called for. I achieved this awkwardly as I landed downwind and stopped just short of a large thorn bush. It was remarkable how quickly people appeared from nowhere. A phone call was made and soon a rescuing aircraft appeared and landed, old ‘Rumpety’ was refuelled, and I took off and returned to my home airfield and a strict dressing down from the CO for straying away from home. The next day I was ordered to report to Beverley.

As in Doncaster the town’s racecourse was used as our airfield. Here, we underwent strict instruction in advanced flying, bombing techniques, photography and signals. After our daily courses we were allowed to fly freely so we generally made straight for the seaside town of Bridlington to buzz the pier and anyone on it, but after complaints from an irate town council, and an old lady who had been prostrated with shock, flying over the town was restricted to below two thousand feet.

Shortly after, returning from taking photographs around Spurn Head, my engine cut out without warning and I was to experience another forced landing. I ended up in a field of corn and as the aircraft drifted to a halt it tipped over, leaving me suspended in my straps with petrol pouring over me. Hastily unhooking my harness I took to my heels as I was soaked with spirit and the exhaust pipe was probably red hot. After a suitable time, I returned to rescue the camera and plates, they were unbroken, but the propeller had been broken. I purloined that fixing a clock in the centrepiece as a memento.

Another alarming experience occurred during the cross country flight which was the last test for my wings. I ran into a terrific hail storm and received the most painful buffeting of my life, but as I was beginning to really get worried – as the storm whirled the plane about like a leaf in the wind, we flew out of the storm  – into brilliant sunshine. Espying Leeds in the distance I landed in Tadcaster to find the propellers had been very badly chipped by impact with large hailstones. They had to be changed before my return to Beverly. Next day my CO informed me I was now fully qualified as a pilot and could now wear wings. He also added that this was about as near as I would get to being an angel.